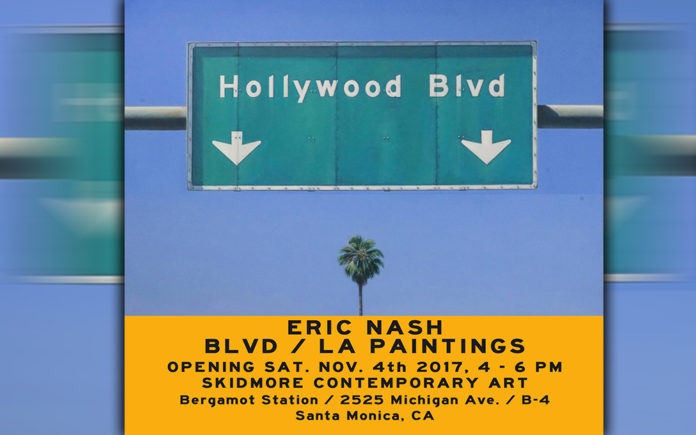 It seems that with every generation an artist comes forth who captures the everyday without the artifice.  No Photoshop. No Toon Boom. No Instagram Filters.  The image speaks loudly without the bling.

In days past it was the work of Andrew Wyeth – Wyeth’s work is still seen in pop culture from the Simpsons (Mr. Burns replaces Christina in his version), to M. Night Shyamalan’s The Village, even Snoopy had a Wyeth in his doghouse. The images Wyeth created rise above the fray because they have a sense of honesty and truth.   Eric Nash creates work with the same honesty free, from the convention that more is better. His imagery is the message.

Eric received his BFA from the University of Illinois at Urbana-Champaign. He worked in Chicago as an art director in advertising before relocating to Los Angeles in 2000. His studio is now in the High Desert – Yucca Valley where he creates a world of highway signs, familiar mysterious landscapes, skulls and birds. Where Wyeth captured sensuality in light, Eric captures the sensuality in the hours between dusk and dawn.

Eric’s latest work opens at the Skidmore Contemporary Art Gallery, in Santa Monica. The show runs through November 24th. The paintings, oil on canvas and most 36 in x 48 in, are places that are known to many of us. The highway sign, captured in Palm Springs 111 is a beacon to the local and transient population of the Coachella Valley. The pieces are what they purport to be – nothing more and yet a great deal more.

What is it about these images that attract Eric? “I gravitate toward the ideal moment or the iconic but within the common and the everyday,” said Eric. “Something that says the most with the least and is universal in some way. Many times I’m looking for an ‘establishing shot’ as in cinematography – something that begins a story for all of us – or at least us here in Southern California and those who love this place. Or something that feels like a memory which is often more idealized and simplified than the real thing.”

“I’m a realist but not a literalist. I use photorealistic techniques but I don’t copy photos. I use photos as a starting point to create a new or more idealize reality through my hand and mind.”

This is the latest one-person exhibition for Eric.  How does he handle the pressure to repeat prior success?  “There is always pressure to repeat your success or a popular image. But as an artist it is fun to re-explore images that have that have universal drawing power and to see them in new ways. It actually becomes a challenge and it often leads to better and deeper work. And it gives you, as an artist, recognizable themes and a visual vocabulary,” continued Eric.

Where does Eric go from this point’ “That’s always the big question after a show. In one way you need to keep doing more of what you do but only better. You need to surprise and delight yourself and the viewer. And you owe it to yourself and collectors to keep looking for that ideal image.”

“And yes, there’s so much I want to say and that I will reveal in steps and stages as time goes one. What I show is often not the whole of my art only what I’m choosing to show now and sell. What you chose has to connect to the past but be fresh. It’s a fun challenge. The good news is that the desert, the west and California keeps me continually inspired every day through its iconic beauty and mythological power.”