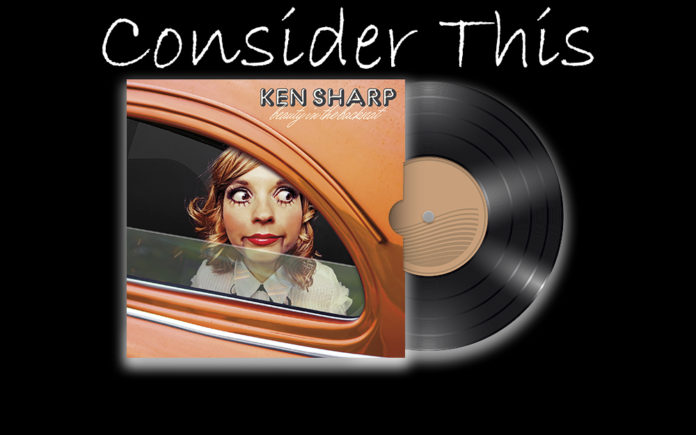 If you grew up in the late ‘60s and early ‘70s, chances are, you remember those hit collections advertised on television from K-Tel and Ronco. They were released every few months and could be found in grocery and drug stores. Hit tracks were stacked sometimes 10 to a side, randomly placing “Get Dancin’” from Disco Tex And The Sex-O-Lettes’ next to “Beach Baby” from First Class and “Life Is A Rock (But The Radio Rolled Me)” from Reunion next to “Midnight Train To Georgia” by Gladys and her Pips, with no rhyme or reason. Just like AM radio! These days, the best way to replicate that experience is by listening Ken Sharp’s new album, Beauty In The Backseat.

Ken Sharp was one of those kids who was obsessed with music from an early age. Growing up in Philadelphia in the ‘60s, he wigged out to everything from Elvis and the Beatles, to The Beach Boys, Philly Soul, the Four Seasons and the Who. Motown was also a huge inspiration, especially Stevie Wonder. At age 12, he heard a neighbor down the street jamming on electric guitar to a Kiss record and figured he could do it too. Although his family had limited resources, his grandpa bought him a red Electra (a knock off of the more coveted Gibson SG), and he was off!

Once he became proficient on guitar he added bass, keys, electric sitar and ukulele to his musical arsenal. Pretty soon he was playing in swingin’ combos like High Tide and The Michael Paul Band. Of course, real life intervened and following school, Ken became a writer.

Fueled by his passion for music, he began writing about it. Ken swiftly earned a reputation as an indefatigable Rock N’ Roll historian. In the ensuing years he has written definitive works on bands like the Raspberries, Cheap Trick and Kiss as well as conversational tomes on the Power Pop genre and the Wrecking Crew. He has also contributed liner notes for albums by Sly & The Family Stone, The Babys and The Guess Who, just to name just a few.

Despite his literary success, creating his own music remained a driving force and Ken continued to write songs. In 1994 he received financial backing and booked some time in a recording studio. The result was his solo debut, 1301 Highland Avenue. It garnered rave reviews and a devoted following. As the 21st century dawned, he signed with the respected indie label, Not Lame and sidestepped the dreaded slump with Happy Accidents. The album earned more critical acclaim and a broader fan base.

Ken relocated to Los Angeles in 2001, but it was another six years before Sonic Crayons was released on his own Jet Fighters label. Living in L.A. placed him a little closer to the action and pretty soon he was performing opening sets for ex-Baby John Waite and perennial Teen heartthrob, David Cassidy, he even headlined a show at the venerable Troubadour in West Hollywood.

While working on a Power Pop documentary, at Reseda Ranch Recording studio, he became acquainted with the owner, protean musician/producer Fernando Perdomo. The pair clicked and Ken recruited Fernando to co-produce his fourth album, New Mourning. Although it had been nine years since his last effort, it was warmly embraced by critics and fans alike and his songs received airplay on Sirius XM’s Little Steven’s Underground Garage station, as well as Rodney Bingenheimer’s taste-making KROQ show.

Now after a remarkably quick two year turn around, Ken has returned with his fifth effort, Beauty In The Backseat, once again enlisting Fernando to co-produce and play a plethora of instruments. The opening cut, “Rock Show,” acts as an overture of sorts, setting the stage for the action-packed rollercoaster of sounds.

Blasting into the stratosphere, stuttery guitar riffs connect with an assortment of keys, as wiry bass and a handclap beat add an amphetamine rush. The melody and arrangement land somewhere between the sugar rush of the Bay City Rollers and the sleazy exuberance of Kiss, so it makes perfect sense when Ace Frehley adds a rangy guitar solo that veers from swaggering to feral to ferocious.

Beauty In The Backseat uses Power Pop as a springboard to explore a surfeit of styles. Whooshy synths, ringing guitars and a pulsating beat drive the action on “Mona Lisa Smile.” But the brittle New Wave edge is leavened Ken’s sweetly sincere mein. Conversely, the Soul-tastic “Lemons Or Lemonade” feels like a long-lost collaboration between the Sylvers, the Stylistsics and the 5 Stairsteps. Sitars and tart guitar bounce off Wurlitzer, strings, Moog, organ, mellotron and twinkly glockenspiel. Ken’s winsome tenor pitches toward falsetto as lyrics offer some emotional rescue; “I’ll be the hotline to your heart, connect me right away, those backstabbers don’t matter, yeah that’s right/We’re gonna chase those bums away I will lift you up with a little luck, you can turn lemons to lemonade.”

The best tracks here toggle between quirky and heartfelt. Take “Pull The Strings,” the melody is anchored by pounding piano, chunky guitar and a stop-start rhythm. The lyrics share a vaguely spooky tale of a lonely 47 year old who seems emotionally, um attached to his ventriloquist dummy; “I just turned 47 and I still live at home, my friends call me crazy but with Charlie I’m never alone/He’s my close companion, I take him everywhere, when Charlie’s around he’s the life of the party I swear.” But the cascading harmonies on the chorus are so soulfully sweet, that it’s easy to overlook the suspicion that this guy has probably provoked a restraining order or two.

“The Hardest Part” is a jangly charmer powered by Byrdsy 12-string electric and acoustic guitars wed to a rough and tumble backbeat. The lyrics share the sad-sack saga of a guy still under the spell of his ex. As the tempo downshifts on the bridge, he quietly weighs his options; “Sometimes you gotta save yourself and move along with someone else, but part of me goes back in time when I was yours and you were mine.”

Meanwhile, “Ring On Your Finger” is a fiery conflagration that is fueled by a pile-driving beat, pliant keys, angular sitar, elastic bass and fuzzy guitar. The insistent Moog notes that bookend each verse share some musical DNA with the Velvet Underground’s epochal “There She Goes Again.” The song pivots from Motown to ‘60s Garage Rock before hitting the Punk-tastic bridge and then revving up with a supersonic guitar solo garnished with glockenspiel. The lyrics unspool a shaggy-dog story about a grifter ex-girlfriend in trouble with the law.

There’s little ambiguity behind two tender tributes to two very different musicians. “The Day hat David Bowie Died” is a poignant elegy to the shapeshifting savant who gave us permission to let our freak-flags fly. Accented by strings, spidery guitar and Bells both sleigh and tubular, the ballad pays homage to a “dandy, so cool and so flash” he was a secular savior to “the rejects, the bastards,” and “the whores.”

“I Wanna Be David Cassidy” is a musical mutatis mutandis, Buoyant and bubblegum-y, it includes a wall of guitars, bell tree, tambourine harpsichord and an infectious handclap attack. The lyrics offer a sideways appreciation for the reluctant teen-idol who sadly passed away last November, after revealing he had been diagnosed with dementia. The song’s closing coda affectionately approximates the opening notes of “Come On Get Happy,” the Partridge Family’s first hit single.

Other intriguing tracks include the ricochet whiplash of “24 Hours A Day,” and the rattlesnake shake of “No One Seems To Stay Together Anymore.” “Listen To Me” is a slinky Wurlitzer and sitar flavored plea for unity. On “Sinking,” squirrely Moog sounds are supplanted by cantilevered keys, wah-wah guitar, plus a wash of strings, organ and Wurlitzer. The lyrics on this mid-tempo ballad shuffle through Titanic-size questions investigating a shipwrecked relationship. Something of a musical Frankenstein, “Closer” feels like a dream collaboration between Hamilton, Joe Frank & Reynolds and The Sweet. A Glam/Glitter groover, it’s candy-coated shell conceals a creamy center.

The penultimate track, “Philly Kind Of Night,” arrives near the end of the album. Shang-a-lang guitars brush up against swoony strings a tumbling rhythm and nearly basso-profundo backing vocals. It splits the difference between bubblegum crunch and a glossy Disco anthem. (Think “Moonlight Feels Right” meets “Philadelphia Freedom”). Closing out this sharp, 16-song set is “Miracle,” a sun-kissed mea culpa.

Ken Sharp manages to distill his myriad influences, creating crisp soundscapes that never seem contrived or derivative. His music is sleek but never slick, recalling a bygone era when Power Pop, Bubblegum and Sunshine Soul ruled the airwaves. Beauty In The Backseat is sun-kissed songcraft that never goes out of style.