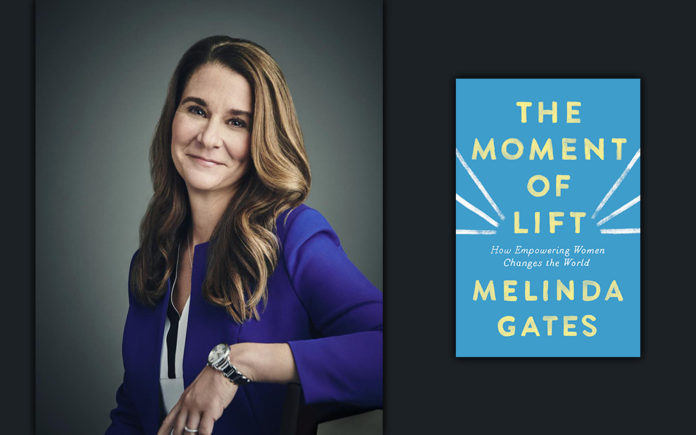 —–
The Moment of Lift
by Melinda Gates – Nonfiction
—–

Sunday we celebrate mothers and all they do for us.  Our very existence begins with mom, and our future is often shaped by her efforts on our behalf.  In Melinda Gates, The Moment of Lift: How Empowering Women Changes the World (Flatiron Books, 237 pages) men and women must overcome gender bias to improve the lives of all human beings.

Author Melinda Gates is the spouse of Microsoft co-founder and billionaire, Bill Gates.  Before you pass judgment on her as a grandstanding, out-of-touch “one percenter,” this book reveals Mrs. Gates to be an incredibly humble, down to earth, and credible, hands-on leader determined to improve the way the world treats its female population.

Gates’ premise is simple – invest in women in order to create a better life for those in their care and the communities in which they reside — and humanity is uplifted.

The Moment of Lift brings to light ways to combat poverty, which Gates has discovered through her work traveling all over the world with the billion dollar foundation that bears her name.

Throughout the book, Gates shares her personal journey as well: growing up a good Catholic girl, being hired at Microsoft, getting married, having kids and the challenges of finding her voice and equity in her relationship with her husband.

Gates studied computer science and has an MBA.  She joined Microsoft when it was a small organization.  She’s an intelligent, independent thinker.  The book reveals a woman who is not just satisfied to be told about a certain situation; but a woman who must directly study the data and see it for herself.

As a result, Gates discloses her experiences and what it takes to begin helping women and their families out of poverty.

The chapters outline core problems and give examples of working solutions.

An early chapter is about how important access is to contraceptives.  When women can plan for children, they are more likely to get an education, earn an income, raise healthy children and have money to feed, educate and care for their kids, which lifts up the entire family.

Gates further discusses the issues of child marriages, educating girls, women in agriculture and the workplace, and the amount of unpaid work done by women.  She discusses the #metoo movement and the need to end gender bias and harassment in the workplace by changing the male dominated culture.  Gates believes by not speaking up, you are part of the problem.  When women support one another they have a stronger, more influential voice.

What’s remarkable about Gates is her ability to ask the right questions and find financial ways to apply support that can directly affect an outcome.  The book is filled with terrible examples of abuse, but also hope and joy, as women escape from poverty and enslavement to find personal dignity and a fulfilling life.

I didn’t know anything about Gates and now I consider her a role model, mentor, humanitarian and hero.  There are so many profound insights, thoughtful observations and meaningful quotes from Gates throughout the book.  She is humble, wise and loving.

What surprised me most was Gates’ ability to seek and understand the underlying culture that keeps women from having any agency.

Culture change is the biggest challenge for which women (and men) around the world must contend and overcome.  Male dominance, hierarchy, and patriarchal religions keep women down all over the globe. According to Gates, there are no gender equal societies on earth!

To be clear, Gates is not man-hating whatsoever.  She argues only for equality. She believes women need to be recognized and considered for their skills, efforts, talents, contributions and accomplishments to lift up both women and men in a “state of partnership.”

It is acutely apparent that Gates has a passion for her mission.  She acknowledges her privilege and the advantages it provides her and her family.  As a Catholic, and spiritual person, she has reconciled her position on contraceptives as a major component in helping women out of poverty sometimes using scripture to support her position.

Around the world, Gates recognizes that there is a “…universal human desire to be happy, to develop our gifts, to contribute to others, to love and be loved — we’re all the same.”

Studies show that when women are supported and lifted up, their families and communities directly benefit.  Change is possible.  But equality comes from removing gender bias.

This Mother’s Day let’s celebrate mothers and women, and the significant influence they have and can have in making our world a better place.  It’s time to further empower women and end gender bias.  Happy Mother’s Day.