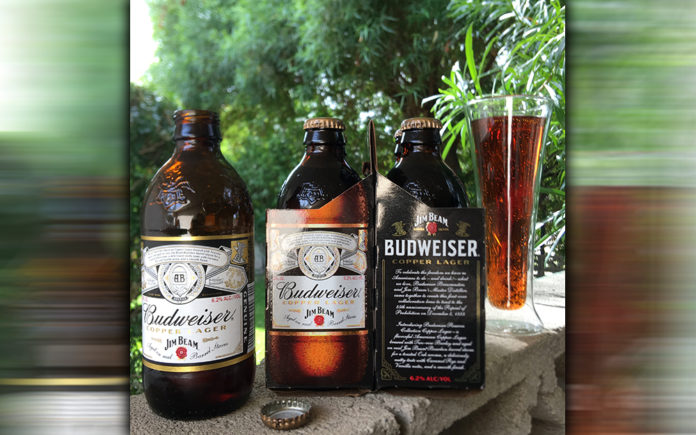 18th century Irish and Scottish immigrants brought whiskey making to the US, and it thrived in the southern states where the Scottish settled the Appalachian regions of West Virginia, North Carolina, Tennessee, and Kentucky. The scots-Irish began distilling a corn mash; aging it in new or charred oak barrels, and this product came to be known as bourbon whiskey. Contrary to popular belief, Jack Daniels is not a bourbon whisky. Jim Beam is a bourbon whiskey, and the pairing of it with a Budweiser feels like a recipe over a century in the making.

Now, the relationship between bourbon and beer is nothing new. In the 1890’s, a saloon in Butte, Montana offered coal miners an after work special called the “Sean O’Farrell”, which was the first ever shot and pint combo on sale to the public. The term “boilermaker” eventually became synonymous with the act of dropping a shot glass of whiskey into a beer stein, and the name stuck. Across the pond in England, if you’d asked for a boilermaker, you’d get a half pint of draught mild mixed with a half pint of bottled brown ale. If you wanted whiskey and beer, you’d have to had called for “an American shot and a pint”. That was the only connection between the two beverages until craft brewers began marketing bourbon barrel aged stouts as a thing in the 90’s.

Aging beer in wood was nothing new, but when Firestone Walker debuted its flagship British pale ale called DBA, it brought barrel aging to the modern era of craft brewing. Blending a combination of steel tank and wood aged ales together, a unique flavor combination was created that still carries the popularity of DBA to this day. Goose Island took barrel aging to the next level when they debuted their now legendary Bourbon County Stout. Using used whiskey barrels supplied by the master distiller from Jim Beam, Goose Island created a product whose main selling point were wood and bourbon notes married into a high alcohol imperial stout. The results were delicious, and the beer put Goose Island on the map.

It’s no coincidence that AB InBev purchased the Goose Island Brewing Co in 2011 and has now created a lager aged on oak staves flavored with Jim Beam whiskey. The influence from Goose Island’s original Jim beam flavored stout is as clear as day, but can it live up to the legacy of wood aged craft ales such as DBA?

True to its namesake, this beer has a beautiful color that’s somewhere between red and champagne rose gold. Low foaming with a quickly dissipating head, this is a very attractive beer to look at. 5/5

Notes of fresh strawberries as well as dried fruit open the bouquet, with an unpleasantly metallic, (ironically) coppery note on the finish. 3.25/5

surprisingly fruity, with overtones of vanilla and toasted coconut. Not the ribbons of caramel and English toffee you get from an ale like DBA. A slight rice starchiness tails in the finish. There is an assertive bitterness that isn’t harsh, and overall feels clean on the palate. 3.75/5

Medium bodied with a slight slickness on the tongue that it immediately countered by a slight astringency at the end. The drying effect combined with a mouthfeel that is at once thin and slick, all combines for a rather paradoxical experience. 3.75/5

A wholly unique and original recipe that at the very least, succeeds in tasting like nothing else in Budweiser‘s portfolio. A solid and approachable entrant in the wood aged beer category, there is still something still very middle-of-the-road about it. While it may not convert craft beer aficionados into AB InBev fans, it may very well succeed in gaining fans in casual beer drinkers. Beers like this actually help craft beer by acting as a gateway for those who may go on to explore other wood aged beer, such as Firestone Walkers DBA.