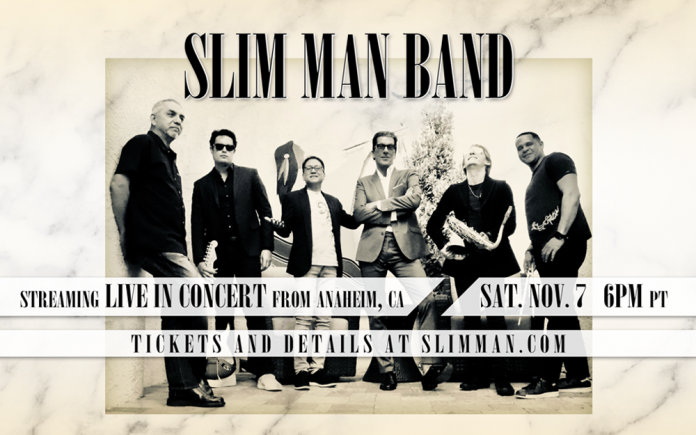 Slim Man and his band of big guns will be performing a livestream concert on Saturday, November 7, 2020 at 6 p.m. (PST) from a fully equipped soundstage in Anaheim, California. You can purchase access for $15 at slimman.veeps.com.

The Palm Springs-based singer, songwriter, podcast host and chef released the double CD Slim Man LIVE at Vicky’s! earlier this year. The double album includes 28 songs pulled from over 4 hours of music recorded in June 2019 on a 24 multitrack console at Vicky’s of Santa Fe in Indian Wells, CA.

The first Slim Man release, End of the Rainbow, was released in 1995 and is more R&B with the Jazz and Soul hit Faith In Us. Young at Heart (2017) is on the swinging side of things and includes the masterstroke standards The Best Is Yet To Come and Nice ’n Easy.

Coachella Valley Weekly communicated with Slim to learn more about his decked out livestream show and to provide further insight into one of the desert’s best improvisational musicians.

CVW: Your Slim Man livestream concert on Saturday, November 7, 2020 at 6 p.m. (PT) on a fully produced soundstage in Anaheim, CA sounds like a huge undertaking. Tell us more about the performance?

Slim Man: “It’s the first time we’ve ever done something like this. But now’s the time to try something different, right? I got a call from Gregg Hudson, he supplied all the backline gear for all the big SoCal Jazz fests. When the virus hit, he turned part of his warehouse into a really cool soundstage. He has all the best sound and lights, not to mention drums, amps and keyboards. He also built a recording studio and a video control room, and…she’s a-so NICE! I went there last week…impressive. I’m excited about the show.”

CVW: You are notorious for having such an illustrious cast of characters in your band? Give us a rundown on the players and their strong points. 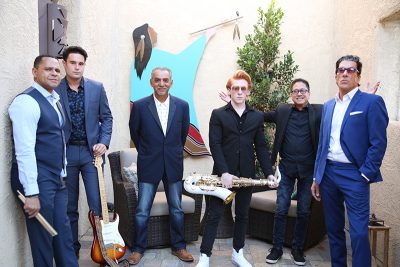 Slim Man: “Craig Chesnut is playing drums, we’ve been making music together for a while. He’s such a strong drummer and also adds a lot of cool percussion, shakers, cowbell and woodblock. Craig joined the band after our drummer at the time got thrown in jail! True story! Craig subbed that night and was amazing. Nick Sosa is playing guitar, he is a beast, he practices for hours a day, and it shows. He has such a command of his instrument. I saw some homemade videos online of him playing solo guitar and was so impressed I asked him to sit-in with us at Vicky’s and he blew us away. Chase Huna is on sax, and he’s got skills. He’s got this natural feel, he plays and it just sounds right. Great vocabulary of notes. I was doing a Jazz jam a few years ago and Chase came up and sat in and played like a champ—with no rehearsal. And Tateng Katindig—the ‘Thrilla from Manila’—his piano playing is so soulful and compelling. He’s got vibe and deep knowledge of all the standards, and he plays from the heart. The first time I met Tateng was right before showtime at a Slim Man concert in Temecula, CA. We went on stage having never played together and Tateng was brilliant and magical.”

CVW: Prior to the pandemic, you kept busy performing live at venues like Vicky’s of Santa Fe in Indian Wells, CA and Spaghettini’s in Seal Beach, CA. How have you kept your sanity amidst the pandemic?

Slim Man: “I was pretty crazy before the pandemic. But I decided to keep myself ridiculously busy. I do two LIVE stream shows a week on Facebook, It’s called ‘5@5’ on Tuesdays and Thursdays at 5 PM PT. I’ve got a new Slim Man single coming out soon, and I’ve been putting this LIVE stream show together for the past month, so all that keeps me sane. Somewhat…”

CVW: With all the additional time you have thanks to COVID-19, any update on your culinary endeavors and Slim Man Cooks II?

Slim Man: “Slim Man Cooks II is in the works. Thirty recipes, thirty stories, thirty cooking videos, and it’s looking good. It should be out in February 2021, and I’m pretty excited about it. We had a pretty successful Kickstarter campaign, so now I can take all that money and move to a foreign country under an assumed name.”

CVW: The classification of music known as Jazz is an unconstrained form of expression. How do you feel Jazz will look and sound like post-pandemic?

Slim Man: “It will be interesting to see how it all plays out. I’ve been writing music to cheer myself up. Other musicians I’ve talked to are writing melancholy stuff, some aren’t writing at all. Will Donato, on the other hand, has released 14 CDs already this year!”

CVW: Why is it important to carry on the tradition of Jazz music, more specifically in the Coachella Valley?

SLIM MAN: “My favorite thing about this music is the improvisation. Not many other styles have that element. It’s a tradition worth carrying on! And everyone in this band is a stellar soloist and impressive improviser. The people out here do a great job of supporting the music. They come out in full force and they really listen.”

CVW: There is strong evidence that sound can drastically influence the way we taste food. What are other correlations between food and music?

SLIM MAN: “Whether I’m making music or cooking, I like to get creative. For instance, the other day I wanted to make some manicotti, but instead of laying it down on its side the traditional way, I stood it up like a chimney. Instead of stuffing it with ricotta cheese, I decided to stuff it with shrimp and scallops in a spicy tomato sauce. I call it Slim Manicotti! I approach music the same way. What if you combine some Jazz chords with an R&B beat? Or write a Pop song with a Swing beat? In food and in music, you need to be creative and original. And you need to make sure nobody gets sick!”

SLIM MAN: “A hundred years from now, if people listen to a Slim Man CD, I hope it brings a smile to their face, a little joy to their lives, and a little love to their hearts. It’s all about love!”

CVW: We are living in some exhausting and troubled times. Anything encouraging you’d like to share with your audience?