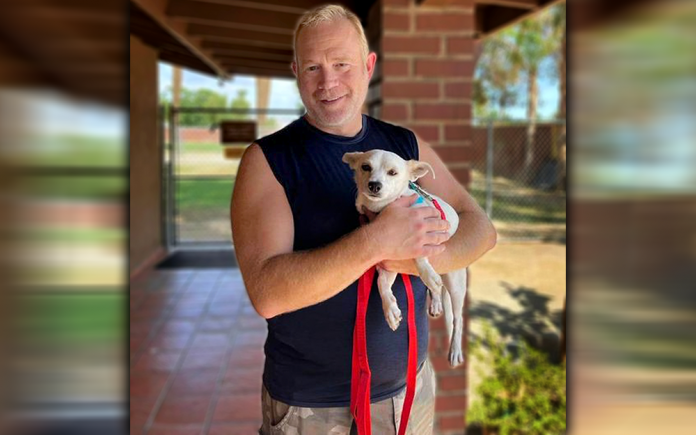 This is a story about a miracle second chance, a story of redemption, a story about love and patience.  Like humans, dogs who have been traumatized can heal over time, but for one small rescue dog it was a longer journey to overcome the past.

Kirk Geiger with Animal Rescue Center of California received information about a large number of dogs living in squalid conditions outside an Indio home.  Some of them, including a group of young puppies, stayed underneath the home seeking shade from the scorching desert sun.  Kirk’s team included Lisa Fein Blodgett, local animal advocate, who agreed to foster the puppies and the several small adult pups.  It was no surprise the dogs had received no prior veterinary care and were kept like trash in the messy yard.

Loving All Animals was contacted by Geiger to take a pair of Terrier/Chihuahuas.  Bonnie and Clyde were transferred to LAA’s small dog shelter in Coachella where they occupied the same yard and kennel space overnight.  Bonnie was shy but approachable.  Clyde assumed a guarding posture and barked furiously at people who approached him, retreating anxiously even when offered treats.  He was no candidate when potential adopters visited, though he happily greeted Lisa when she visited him at the shelter.

Sometimes someone shows up in your life and everything changes.  Todd Brune came to the shelter one day and then returned to make a commitment on his second visit.  This happy adoption photo shows Todd actually holding the dog he now calls Ryder.  It seemed like a happy ending for both, as Todd missed his pup who recently passed away. However, it took awhile for the happy ending to unfold.

Unfortunately, a large Cicada bug flew out of a back yard tree in Ryder’s new home shortly after his arrival hitting him in the head.  The incident triggered something.  The pup retreated underneath an end table in the living room refusing to come out, even to relieve himself.  The dog was silent and still.  Todd brought him meals which the fearful fellow would not eat until Todd left the room.

Trainer Jim Turcott consulted with Todd by telephone with training strategies.  Jim advised Todd it could take up to 4 weeks for Ryder to recover, but Jim was optimistic, and Todd was ready for the challenge.  He advised Todd to pick up Ryder and carry him through the home.  Wrapped carefully in a towel Ryder was quiet and passive as he surveyed the rooms. He improved to the point where he would lay on the bed and watch television with Todd.  He moved closer to Todd, and eventually cuddled.  With skill, love, and patience the process took 3 weeks.  Todd describes it, “He changed, it was like a light switch turning on.”

Some adopters would have retuned Ryder to Loving All Animals, relieved to be rid of the “nuisance”.  The traumatized animal would have regressed further back at the shelter.  Love and perseverance won out over fear.  Todd was patient, and working from home made it easier to handle the situation.  Todd says, “If Ryder hears something he doesn’t like such as a loud boom, I tell him ‘it’s ok buddy’ and he is fine.  I finally heard him bark one day when a friend came over.”

Todd happily updates us, “It is so rewarding when a frightened dog goes from being frozen in fear to open up and bond with you.  Now when I’m working, my loyal dog lays under the desk and he follows me everywhere around the house.  Ryder is my best buddy!”

We will never know Ryder’s history.  Thank you to the team who gave him a bright future…..Kirk Geiger, Lisa Fein Blodgett, Jim Turcott, Todd Brune, and the staff & volunteers at Loving All Animals.

Contact Loving All Animals at 760-834-7000 about adopting or fostering a rescue dog or cat.  Most of the animals there will greet you with a kiss.  Check out their website www.lovingallanimals.org for more resources, available animals, events, and donation information.  There is nothing like the heart of a rescue dog to bring cheer during the holidays!