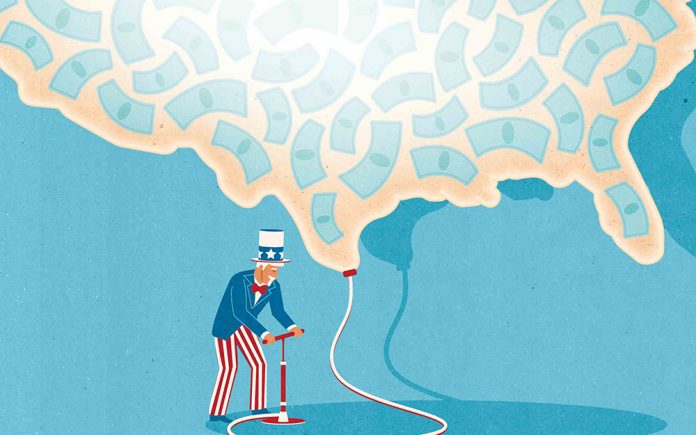 Will these Twenties roar like those of 100 years ago?  Most economists and investment managers think so.

While consensus expects a booming economy for the next two years, the direction of that recovery for many may weaken after one-time windfalls from government relief and stimulus fade.

Many people have a sense that they have more money than ever as shown by the surge of young investors in the stock markets.  The challenge occurs when the cost of goods goes up as they inevitably do when you print so much money.

By printing so much money, prices go up.  A trip to the grocery store or the gas station already shows this in action.  For many stocks, inflation is a good thing as companies with pricing power can increase prices along with the rate of inflation.  Those without pricing power will struggle.

While interest rates may stay low for a few years, they will go up.  A 0.6% increase in long-dated Treasuries during the first quarter of 2021 led to a 10.5% drop in value.  If the Federal Reserve keeps rates artificially low for too long, inflation will increase slowing the economy just like an interest rate increase.  When interest rates go up, those most indebted typically do worse.

It is hoped that the massive relief and stimulus as well as trillions in infrastructure spending expected to be approved over the summer will provide the underpinnings needed to super-charge the economy, reduce unemployment and help us upgrade our infrastructure and job skills.  By underinvesting in infrastructure over the last 20+ years, the United States has fallen behind countries that have invested in their economies with better airports, power grids, shipping ports, broadband access, etc.

In an economy that is 70% reliant on the consumer, we need to find ways to increase the value of work being done while finding ways to re-educate under skilled workers.  As the last twenty years have shown, per capital GDP growth has been okay although the mix of jobs has caused the erosion of many low-skill, middle-class jobs.  Without a way to re-educate millions of workers displaced by the new normal, the costs related to the underemployment of so many people will serve to mute growth as increased taxes will be required to help those struggling to help themselves. The failure to help those in the most economic peril will lead to greater political instability if left unaddressed.

For the Coachella Valley, a large part of the recovery will not happen until people can get together en masse and travel by plane without fear of the contagion.  We should all pray that the 38,000 person gathering for the home opener for the Texas Rangers does not spark the spread of a fourth COVID wave striking Europe, Japan and other parts of the world,

While this suggests a challenging future for some, this time period may prove to be a boom period for those with the skills and education to benefit from this remaking of the new normal. Some companies will experience growth rates previously thought impossible while others struggle to emerge from damage caused by the pandemic. This should cause more mergers and put more pressure on the labor market.  As companies look to expand productivity through the use of technology, there is every reason to believe that a large segment of the population will become permanently unemployable requiring greater need for government-subsidized housing, food and medical assistance.

With this as a backdrop, states like New York and California increase taxes to pay for these heightened social needs yet face the mass exodus of business and jobs as a result.

Unlike the Roaring Twenties of 100 years ago, the outcome of this economic expansion on the back of massive government involvement is likely to cause those with real assets like their house or a 401k account to get richer while those struggling to get by find it harder as prices rise while wage gains struggle to keep up with the inflation caused by the issuance of trillions of dollars needed to keep the fabric of the economy together during these unique times.