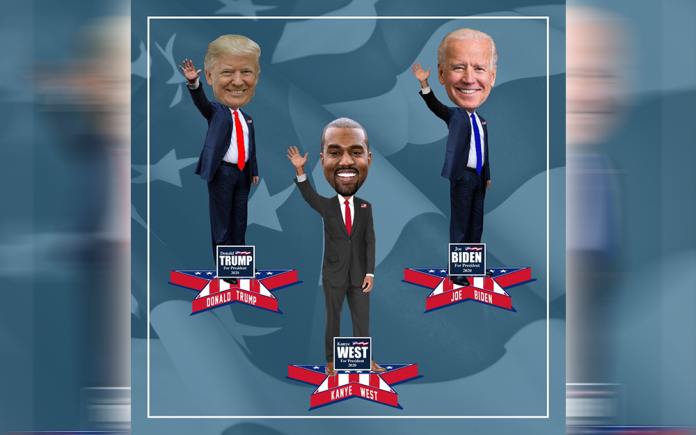 What will historians write when they look back on current times – a period when three of the men who ran for President in 2020 were Yeezy, The Donald and Ol’ Joe.  This same trio continue their pursuits of America’s highest elected office when most Americans wanting none of them.

Let’s start with Ye aka Yeezy, Weezi, Pablo, Malcolm, Louis Vuitton Don, Evel Kanyeavel, Martin Louis Kanye West, Black Zac Efron, Black Hitler, Kanye to the, The Don, Sway King Cole, the LeBron of Rhyme, Omari himself, K-Rock, Mr. West to some, Mr. Kanye Omari West.  This guy is the one who lit his career and personal fortune on fire with his recent love affair with white supremacy while professing his liking of Adolf Hitler.  Per Mr. West’s own words on a radio show known for being a pillar of truthfulness, Alex Jones, he likes Hitler.  According to The Don, Hitler had redeeming qualities – a unique take for an African American who is running for President.  Ye’s logo for his 2024 run includes a swastika.  Seriously. Ye is committed to Ye’s unique approach in attempting to become the next President of Ye United States.

MLK West may have the nerve, if not mental stability or experience, to be President. Only last month, Ye asked Orange 45 to be his vice president.  Ye then married Yeezy designer Bianca Censori at which point she cut her long locks and bleached it blonde to mimic the recent look of Ye’s ex – Kim Kardashian.

Moving on from this seemingly unstable Presidential ‘candidate’ to the one who professes his own intelligence nearly every day, it is time for the latest installment in the daily soap opera known as former President Donald Trump.

In this week’s episode, The Donald’s company has been found guilty of tax fraud and gets hit with a $1.6 million fine, the largest possible fine in the state of New York.  While this is happening, we find out that Trump’s Homeland Security Chief and eight-day Chief of Staff John Kelly released a book titled, “Donald Trump v. the United States.”  In this book, Kelly says that Trump mulled dropping a nuclear bomb on North Korea and then suggesting that the U.S. spin the news to deny that the United States did it.  This from the self-professed “Stable Genius”.

On the lighter side, we learn that Ivanka cut her long, bottle-blonde locks for a shorter look that is reminiscent of Kanye’s ex Kim Kardashian.

If the Kelly news cycle or fraud verdict isn’t bad enough, the lawsuit brought by former Elle columnist E. Jean Carroll moves forward.  As we find out in a review of that deposition, Trump is yet again his own worst enemy do to his incurable case of verbal diarrhea.

When it seems that TrumpWorld is on the ropes with nothing but troubles ahead, President Joe Biden throws the Trumpster a lifeline.

Do you remember that raid on the Miralago complex where highly classified documents were found?  Legal pundits have told us that Trump would easily be found guilty and barred from running for President again should the Department of Justice file charges.

This is when the third clown of this three-ring circus comes in – President Joe Biden.  This octogenarian starts hyping a potential run for reelection in 2024.  He does it with the knowledge that he is about to get his head handed to him for having classified documents all over the place.  We are told to believe that what ‘sleepy’ Biden did is not with the same malice as Trump.

We are told to believe that this Biden’s offense is different than 45s, yet Hunter Biden was paid millions by a Ukrainian utility as well as the Chinese while Joe’s brother is also reported to have received payments.

While all of this would make for a good soap opera or black comedy, historians will look on this period and reason that we all went daft. Let’s hope that we find better leadership for 2024 and beyond.

Haddon Libby is the Founder and Chief Investment Officer of Winslow Drake Investment Management.  For information on our services, please visit www.WinslowDrake.com.