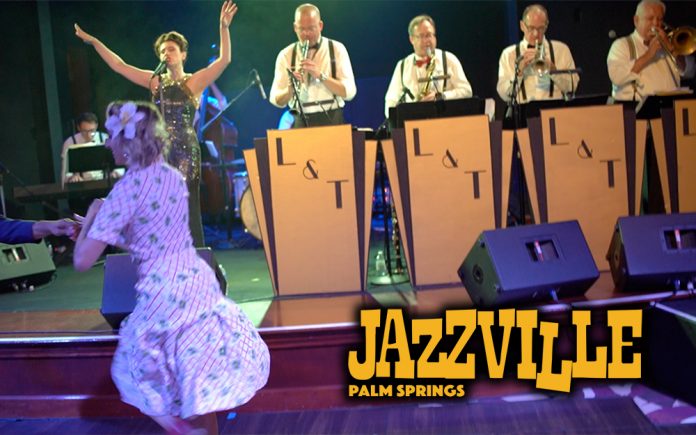 Dubbed as, “The Ultimate Vintage Supper Club Experience,” Jazzville is a series of rotating shows held every Thursday between July 8th through September 30th. Having always been a lover of the old, jazz standards and big band music in general, I didn’t hesitate to take advantage of the opportunity to attend Jazzville last July 15th to see the Jazz Cartel.  A 9-Piece group complete with one of the most animated, upright bassists I’ve ever seen, Jazz Cartel is fronted by a dreamboat of a crooner who’s swingy take on some unexpected songs added even more excitement to a night that nobody in attendance will soon forget. 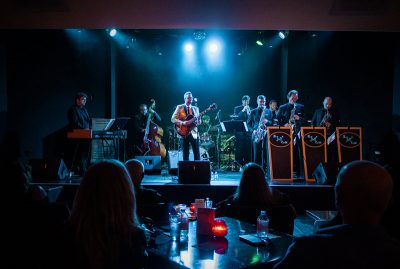 The minute you enter The Cascade Lounge, you realize that Jazzvillle is more than just a concert, it’s an experience. Greeted by gentlemen in velvet blazers, you are personally escorted to your reserved table by one of the lovely hostesses who are decked out in fabulous, sequined flapper costumes. Cocktails and food are available and all of the staff go above and beyond to make everyone’s experience is top-notch.

“What a great room! The vibe is sexy and fun with the flappers and the music is incredible! Great for a date night or night out with friends!” –Courtney Chambers–(local vocalist/musician)

I was able to chat with one of the Jazzville producers, Adam Levy, who has had his hands in local entertainment for several years and always seems to have his finger on the pulse of what’s happening in Palm Springs.

Levy: “I was originally approached by Barry Martin and his partner Mark when I was the marketing director at The Hard Rock. They had started putting on jazz shows across the street at Oscar’s where they had quickly outgrown their indoor space and they had the idea of bringing it to a restaurant inside of what’s now Hotel Zoso. I instantly had bigger plans for them. I wanted to put it in the night club and elevate the show in so many ways. I was a believer of his mission statement and his ode to the Chi-Chi Club. That’s basically what Jazzville is intended to be; a recreation of the legendary Chi-Chi Club of the glamour days of old Palm Springs.”

Levy continues: “Over the years I helped in the background to really just grow the show and the idea of how big it could be. Of course with the pandemic, Jazzville was put on hold with everything else and after moving around to different venues over the past 4 years, Barry and Mark were ready to wipe their hands clean of it to which I basically said, “not so fast,” and started looking for a suitable venue. At that point I reached out to my friend Jay Bednar who works in entertainment at the Agua Caliente Casino because I was interested in the Palm Springs location and serendipitously, it worked out perfectly. It really was our dream location for this series of shows because it’s a perfect place for a supper club.”

CVW: So you’re about halfway through the series now? 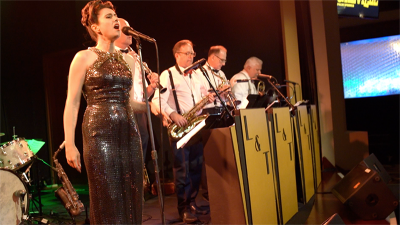 Levy: “Yes, and surprisingly, we have sold out of pretty much every show! We’ve been really fortunate. Like I have said before, Jazzville is not your parent’s jazz show. It’s more than just a concert it’s an experience and so many of the people who come to experience Jazzville become part of the family and that is really part of what has allowed us to thrive over the years. A lot of those who come are the same folks that come week after week. Our fan base has kind of snowballed and they are really part of our vision now.”

CVW: When I was there I felt as though this was something that I could take my grandmother to or take my daughter to and everyone would have an amazing time.

Levy: “Exactly! The groups we book are young musicians who put a youthful spin on old standards. They are pushing the envelope within their genre which appeals to a younger demographic, but at the same time they are still paying tribute to what is classic American music that appeals to an older generation while in some cases, putting a modern spin on it.”

CVW: So besides Jazzville, what else are you cooking up in the near future?

Levy: “Very soon we are going to be launching standup comedy at The Cascade Lounge. It starts August 20th and will be every Friday.  So far we’ve booked Jamie Kennedy, Pablo Francisco, Carlos Mencia, Dion Cole from TV’s “Blackish” and some others TBA.”

The future of local entertainment in Palm Springs is looking bright and I for one can’t wait to soak up as much of it as possible.

For details on Jazzville and other upcoming events visit