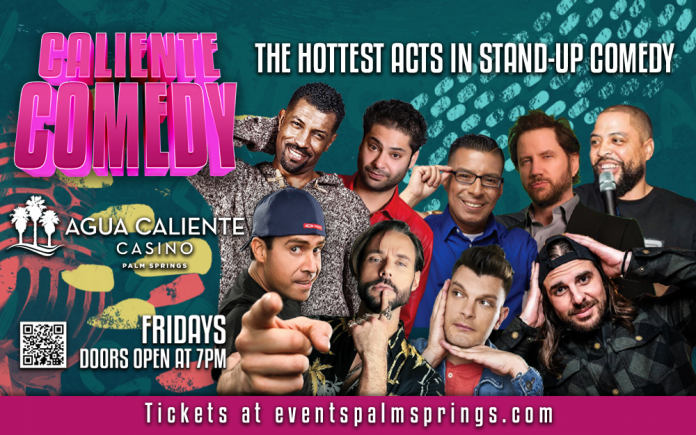 Amid the Coachella Valley’s busting music scene, there has yet to be a broad selection of comedy shows for audiences to enjoy live stand-up performances. Agua Caliente Casino in Palm Springs is bringing a whole new season of shows with celebrity guests and rising talent from the world of comedy. 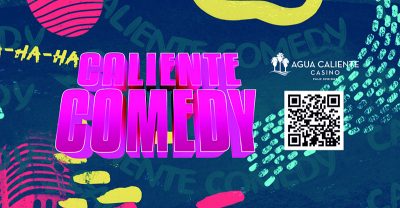 Caliente Comedy is presented by Comedy Madness located inside the Cascade Lounge at Agua Caliente Casino Palm Springs. For over 10 years, Comedy Madness has produced thousands of shows in North America, including weekly showcases in Los Angeles at the Comedy Store, Laugh Factory and Ice House Comedy Club. Each show is 90 minutes and features a roster of comedians with appearances on the Tonight Show, Conan, Netflix, America’s Got Talent, Comedy Central, Showtime, and more.

Adam Levy and Mike Quu are co-producers of Caliente Comedy, determined to bring quality, diverse entertainment to the desert scene. Levy and Quu have worked together for years on different programming, starting in 2017 at the Hard Rock in Palm Springs—now the Hotel Zoso.

Quu is the producer of the long-standing show, Comedy Madness, and that is how he met Adam while presenting in Palm Springs.

“It was a weekday and I remember thinking to myself, ‘There’s no way there’s people here.’ Then I looked and all the seats were filled at Comedy Madness. I was so impressed and needed to know who this guy was,” reminisced Levy.

Levy then reached out to Quu, explaining that he would like to work with him in the future. They then worked together to bring high-quality, hilarious entertainment to the desert.

“Through all our time working together, now we can really bring that comedy experience to Palm Springs. This is the perfect-sized venue to host Caliente Comedy as it seats between 175 to 200 people. We’re bringing the same talent we have from shows in L.A., and now we’re introducing them to desert audiences. There hasn’t been any real comedy club experience until now so we are aiming to get the word out there,” explained Quu.

This is the first time that any of the Agua Caliente Casinos are offering to bring stand-up comedy as an entertainment option on a regular basis. It is also an essential art form to showcase post-pandemic after a year of so much turmoil.

“People want to get out and laugh again. They want to forget all the depressing things that were going on the last 18 months. It’s great to bring this season with the opportunity for more laughs and smiles,” stated Levy.

There are currently no plans to have guests show proof of vaccination at Caliente Comedy, but that may be subject to change depending on the COVID-19 climate in the coming weeks.  All attendees and visitors at the Agua Caliente Casinos are required to wear masks indoors when not eating or drinking.

The goal of Caliente Comedy is for it to become a mainstay of comedic entertainment for the Coachella Valley.

“Having this diversity in entertainment is long overdue. Palm Springs is exploding and growing as a city, and we want stand-up comedy to be available on a regular basis. We want our home desert to have acts that you don’t have to drive all the way to L.A. to see,” said Quu.

Shows will be held on Fridays, starting on August 20 and carrying on through late October. All attendees of Caliente Comedy must be 21 years of age or over. Doors open at 7 p.m. in the Cascade Lounge with an 8 p.m. showtime. There will be a light menu and drinks served throughout the show. All ticket purchases are final, with no refunds or exchanges.

To purchase tickets and to keep updated on the line-up, visit eventspalmsprings.com.