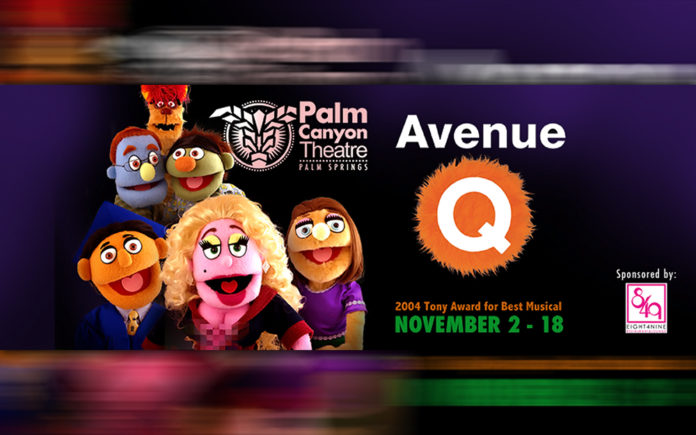 In an article from Psychology Today, Wendy Lustbader M.S.W. wrote, “No one beyond their youth wants to be in their twenties again. I’ll take the body, but I wouldn’t want the life.  These are the most difficult years of all. We have to figure out who to love, how to love, and what we should do with our lives.” 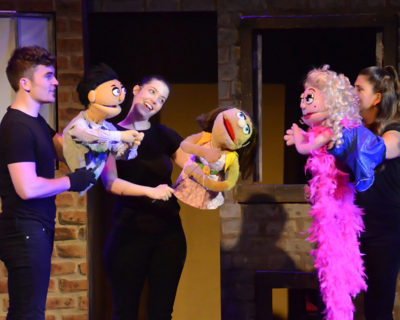 And no other show explores this topic as poignantly and humorously as the Tony Award winning musical, Avenue Q, with Lyrics & Music by Robert Lopez and Jeff Marx, Book by Jeff Whitty.  First produced in 2003, Avenue Q was originally conceived as a television show before opening on stage to wide acclaim.  It could be viewed as the adult version of Sesame Street, if the Muppets discussed Sex, porn, racism and homosexuality.  The songs, no doubt a satirical homage to the musical tunes of childhood, will remain stuck in your head long after leaving the theatre. The characters are relatable and tackle most of the topics that are a common theme for young twenty-something’s who are just trying to find their way in life.  Avenue Q is the heartfelt story of trying to find your purpose in the midst of the chaos called life.

Described as ‘part flesh, part felt and packed with heart,’ Avenue Q tells the Story of puppets and humans living as neighbors and exploring all of the obstacles that most face when trying to find their place in the universe.

Princeton (Nicholas Sloan,) who has just finished college and asks the age old question, “What do you do with a BA in English?”   He is low on cash and finds an apartment on Avenue Q, a fictional street in the Outer-Outer borough of New York City.  There he meets, Kate Monster, (Jamie Leigh Walker) a teacher’s assistant who has dreams of starting her own school where monsters won’t be shunned.  There’s Nicky, a loose lipped, slacker with a good heart, who shares an apartment with Rod, (Nicholas Sloan) a Republican investment banker who swears he’s not gay and has an imaginary girlfriend to prove it.  Trekkie Monster (Alden Dickey) who’s a bit of a recluse due to his preoccupation with internet porn.  Lucy The Slut,  (not going anywhere with that bit of sexism,) is played by Jana Gibony. The two ‘Bad-idea’ bears (Brenna Williams and Aidan Bosworth) and Kate’s boss Mrs. Thistletwat, (Chalise Kunz.)   And three humans – Brian, (M. Carrick O’Dowd), his Fiance (bride) Christmas Eve, a Therapist and Gary Coleman, (Ceisley Jefferson) former child TV star turned building manager. 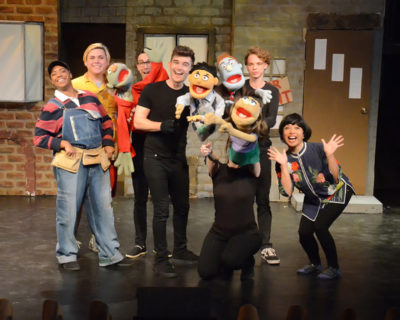 As usual, Palm Canyon Theatre has assembled an incredibly talented cast.  This wonderfully engaging group of actors had me smiling and mesmerized from curtain up until curtain down.

I loved Luke Rainey’s direction.  He kept eleven characters moving and interacting with grace and style.  J.W. Layne’s Set and lighting designs were perfect and brought ‘Avenue Q’ to life.  The multi-talented Derik Shopinski brought his creative costuming skill to this production.

Despite the puppets, this show is not really geared for small children, but I highly recommend that all adults add Palm Canyon Theatre’s production of ‘Avenue Q,’  to their ‘must see’ list of shows.  It’s most certainly one of the best feel good shows I’ve seen.  See this play!

“Avenue Q,” is running though November 18th.   Don’t wait to see this show!