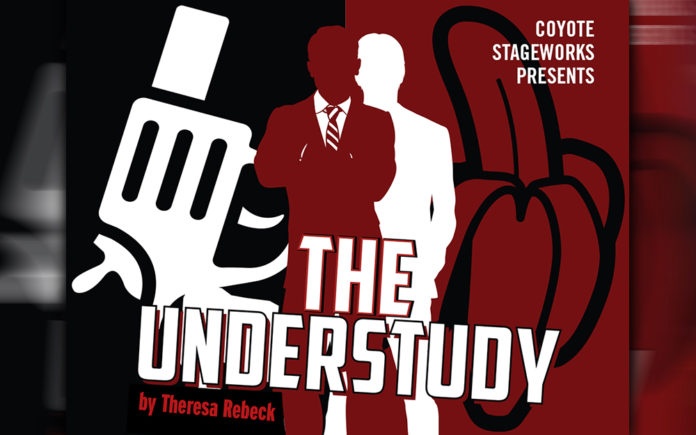 “Sometimes fate is like a small sandstorm that keeps changing directions. You change direction, but the sandstorm chases you. You turn again, but the storm adjusts. Over and over you play this out, like some ominous dance with death just before dawn. Why? Because this storm isn’t something that blew in from far away, something that has nothing to do with you. This storm is you.” – Kafka on the Shore by Haruki Murakami

And so fate sets the stage for three actors who are brought together under the guise of a rehearsal for an undiscovered Kafka play, but in truth it’s an examination of their life achievements or lack thereof.  Franz Kafka, a Czechoslovakian born Jewish novelist who died young at the age of 41, is regarded as one of the great writers of the twentieth century.  The Understudy uses the character’s interpretation of Kafka’s meaning in his writing of the play, to express their individual revelations about themselves.

In Theatre when the curtain rises on opening night it’s as if the script, the direction, the action all fell into place at that single moment. But as most inside the theatrical world will tell you, a show is a process not just an event.  It’s so much fun to catch a humorous glimpse of the behind the scenes work of the rehearsal process as it examines not just the process of production, but the actors, as well.

Opening the night with a presentation of a proclamation from the city of Palm Springs, Coyote Stageworks kicked off their 10th season with a production of Award winning playwright, Theresa Rebeck’s comedy, “The Understudy,” a comedic look at not only the theatrical process, but the human one as well.

Though starting off a bit slow, The Understudy, soon kicked into high gear laughs as a Murphy’s Law, (everything that can go wrong will,) rehearsal is in the midst of a Broadway premiere.  Rebeck’s play explores the behind the curtain world of theatre.  Told through humor and human foibles, The Understudy is a look at the creative world of theatre, through the stark lens of reality.

Robin McAlpine is pure joy to watch in her comedic role as Roxanne, the frustrated stage manager who is just trying to do a pick up rehearsal for a new understudy.  But as the fates would have it, the understudy is none other than Harry, (David Youse) her ex, dumped me at the alter, fiancé.  Harry has a lot of resentment over his struggles as an actor, especially when it comes to the guy he’s been hired to understudy, Jake (Alex Best) whom Harry believes has no talent, yet just made a cool 2 million for an action film.  Youse and Best are in perfect sync trying to out do each other when it comes to Roxanne’s attention and the justification of their own career choices.  The play reveals the rehearsal’s technical frustrations as the wrong set and sound is administered by an unseen sound/light booth operator who has smoked one too many joints.

The Understudy can be seen through November 11, 2018 at The Annenberg Theatre, located at 101 Museum Dr, Palm Springs.