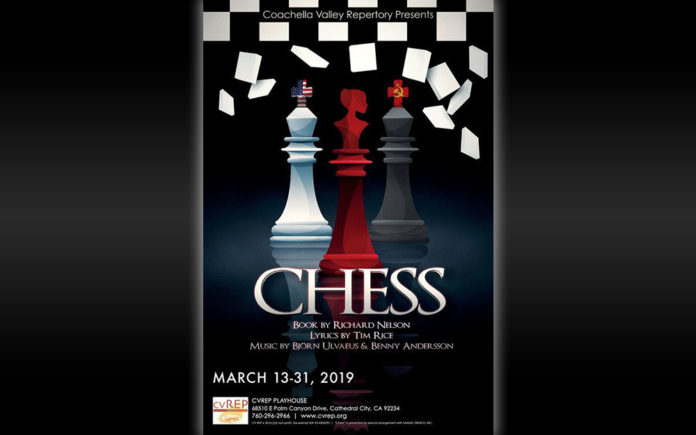 “Moving on up, to the east side…” the Jefferson’s theme song popped into my head as I absorbed the grandeur of the Coachella Valley Repertory’s gorgeous new 208 seat playhouse in Cathedral City.  I was a fan of their home in the Atrium, I don’t believe that quality productions are defined by space, but there’s no doubt that some productions do need a little more room and this newly renovated, state of the art theatre is going to take CVRep’s production abilities up to a whole new level.

As they spread their wings and took flight on this new stage, their opening production was the Broadway musical, “Chess,” with music by Benny Andersson and Bjorn of the group ABBA, lyrics by Time Rice and book by Richard Nelson.

It’s the 1980’s cold war era, Ronald Reagan versus Mikhail Gorbachev, political hostilities between the U.S.A. and the U.S.S.R and two world champion chess players, One American, Freddie, (Garrett Marshall) and one Russian, Anatoly, (David Sattler.)  Both men are vying to become the world chess champion.  Florence, (Gabriela Carrillo,) works with Freddie as his second, but begins an affair with Anatoly, a married man and a citizen of the U.S.S.R., whose life choices reverberate throughout all of his family and can have dire consequences if not met with approval by Russian authorities.

As always, CVRep fills the stage with seasoned and talented professionals.  While I did not feel the chemistry between Anatoly and Florence and thought that the relationship seemed to progress too quickly for me to truly believe them to be star-crossed lovers, Sattler and Carrillo both filled the stage with big talent and even bigger voices.   Svetlana, (Ashley Hunt,) Anatoly’s wife and Florence meet and their rendition of “I know him so well,” was seriously heartbreaking as both women professed their love for the same man.   I was impressed with the authentic sounding Russian dialects that several of the performers seemed to have perfected.

Freddy, the egotistical American champ was not very sympathetic, even his biographically revealing song, “Pity the child,” did not provoke empathy for this character.  But Marshall’s portrayal was spot on with his depiction of a champion narcissist.

The icing on this cake was the ensemble of dancers and Michael Nickerson-Rossi’s choreography.  The steady flow of dance movements provided a captivating visual balance.

The conflicts between these characters play out on the world stage with painful results.  Chess, is an allegory of the world during the cold war era.  Each move is well planned and played with keen gamesmanship, culminating in an ending that I didn’t see coming, but one that resonated and inspired deep thought and emotion.   Carrillo’s solo performance in the finale was truly a moment of pure magic.

The on stage live orchestra that accompanied this show was comprised of Bill Saitta (Bass,) Lance Conrad, (Guitar) Kurt Kelly (keyboards) Dominque Torres (Percussion) Cindy Brogan (Violin) and Scott Storr (Piano.) They were truly phenomenal.  I found myself frequently looking over to watch them play and appreciating their talents.

Ron Celona continues his reign of Director extraordinaire, proving that he can masterfully stage any size production.  I loved Jimmy Cuomo’s simplistic design,  a juxtaposition of black and white squares so perfectly depicting the story and the stark atmosphere of the era. Moira Wilkie Whitaker’s lighting and Kate Fechtig  sound design showcased their skills on this new stage.  And Aaisa Lee’s costumes, especially Florence’s ever-changing suits, were captivating.