Satire in literature is defined as a technique employed by writers to expose and criticize foolishness and corruption of an individual or a society by using humor, irony, exaggeration or ridicule. It intends to improve humanity by criticizing its follies and foibles.

Michael McKeever’s comedy, “Clark Gable Slept Here,” may not do its part to improve humanity, but it sure makes for a good night of fun theater if you’re in the mood for some laugh out loud entertainment.

“Clark Gable Slept Here,” currently in production at the Desert Rose Playhouse in Rancho Mirage, sets the stage for a delightful and humorous expose´ of Hollywood’s dark underbelly.  In a business that is all about show, nothing seems too farfetched when it comes to keeping skeletons in the closet.

At rise we find the body of Travis, (John Fryer) a dead male hooker laid bare for the world to see in the very posh hotel room of aging action star, Patrick Zane. It’s Los Angeles and the eve of the Golden Globe Awards and Zane, the central character, though never seen, manages to set up a very funny and engaging mystery. 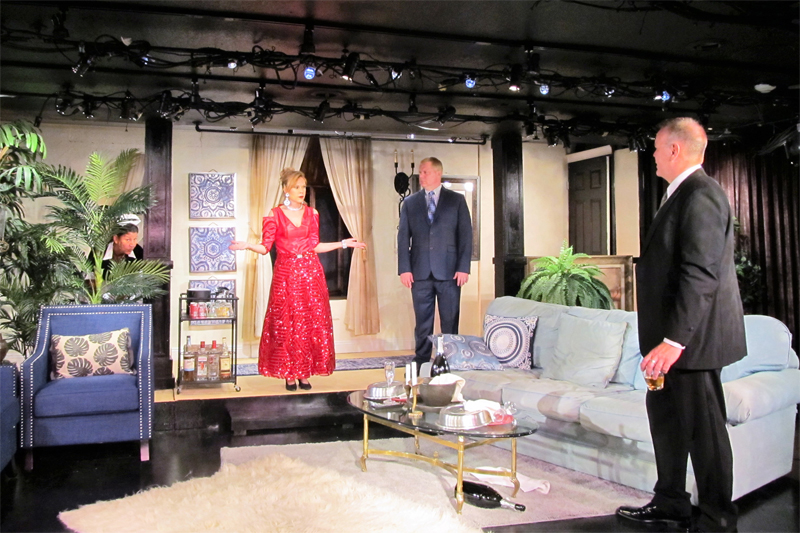 In addition to a naked hooker, we find nervous Hotel Manager, Gage Holland, (Winston Gieseke) who despite his actor sounding name, has zero acting ambition, Zane’s slick talking manager, Jarrod “Hilly” Hilliard (Michael Pacas) and an eager to leave the scene maid, Estelle (Melanie Blue) who made me burst out laughing from the first moment she began to explain the scenario, in very rapid and descriptive Spanish.  Blue is a gem and exceptional in her role as the maid, who has more ambition than meets the eye.

Hilly, calls in Hollywood ‘Fixer’, Morgan Wright, (Yo Younger), to assess and manage this crisis.  Younger is a talent that can lay claim to any role and she owns the stage from the minute she enters.  She is just the right mix of funny, sexy and satirically menacing.

This script is unpredictable and delightful.  It’s a pleasurable romp without any expectations of deep thinking and most certainly a production that is a feather in the cap of the Desert Rose Playhouse.

Jim Strait’s direction and set design create an ambience of pure fun and magical theatre.  Allan Jensen’s costumes were spot on for these characters and Phil Murphy’s lighting rounds out an excellent and quality production.

“Clark Gable Slept Here,” can be seen through May 28th at The Desert Rose Playhouse, located at 69-620 Hwy 111 Rancho Mirage, CA. For ticket information visit www.desertroseplayhouse.org.  This is definitely a show for adult audiences.  And if you’re looking for a fun escape, this is the one to see.

Dee Jae Cox is a playwright, director and producer.  She is the Cofounder and Artistic Director of The Los Angeles Women’s Theatre Project.
www.californiawoman411.com and www.lawomenstheatreproject.org.