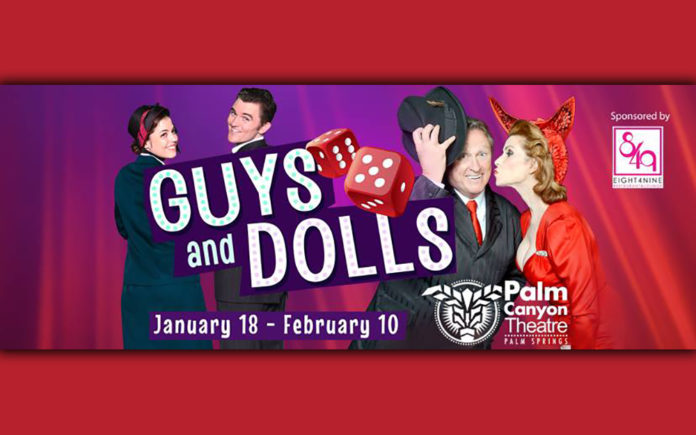 The 1920’s and 30’s were filled with stories of gangsters, gamblers and legendary characters of ill repute.  It was during this era that newspaperman and short story author, Damon Runyon was busy writing exciting tales of the New York underworld. In 1950, Broadway opened a multi-Tony winning musical based on several of Runyon’s short stories, called “Guys and Dolls,” with music and lyrics by Frank Loesser and book by Jo Swerling and Abe Burrows.  In 1951 it was selected as the Pulitzer Prize winner for drama, but because Burrows was under investigation by the House Un-American Activities Committee, (the McCarthy witch-hunt for communists,) no Pulitzer for drama was awarded that year.

Since it’s original opening, Guys and Dolls has sustained its place in stage history as a timeless classic.  This week Palm Canyon Theatre opened their production of Guys and Dolls, to a standing ovation.  Sitting in the back of the theatre I was transformed in time and truly excited to witness this classic song and dance musical of bygone days.

Guys and Dolls, depicts the underbelly of New York City’s gamblers and the women who hope to redeem them.  Gangster Nathan Detroit, (Paul Grant) runs a traveling crap game, but finding a location is proving to be a problem along with his fourteen year engagement to the beautiful singer, Miss Adelaide, (SE Layne.) is wonderful in her role as a woman who is so tired of waiting for a wedding ring, that she creates a funny and imaginary married life to appease her mother.  Sky Masterson, (Nicholas Sloan,) is the guy who always wins a bet, but when Nathan bets Sky that he can’t get Sergeant Sarah Brown, (Jamie Leigh Walker,) the leader of the local Salvation Army, to take a break from her mission to redeem sinners and fly to Havana with him, Sky realizes that he has to wager a pretty big marker if he wants to win this saintly woman’s attention. 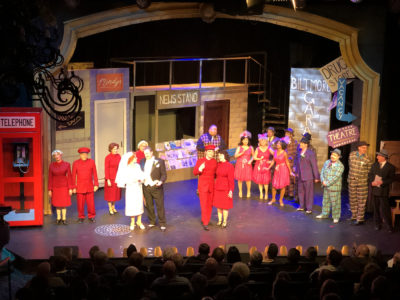 “Luck be a Lady Tonight,” is one of the most famous songs from this production. It will keep playing on a loop long after the music has subsided.  But some of the song performances will captivate and leave you breathless.  SE Layne’s, Adelaide’s Lament and Adelaide’s Second Lament are stunning performances.   Jamie Leigh Walker’s, “If I were a bell,” is sung with such pure emotion and Nicely and his buddies rendition of “Sit Down you’re Rocking the Boat,” was so much fun.   The song and dance in this show will keep you smiling, the incredible live orchestra, (David Bronson, drums. Larry Holloway, bass. Steven Smith, piano/musical director) and the super talented ensemble that Palm Canyon Theater has on tap for this show will make you feel as if you are back in the Golden Age of Broadway theatre and loving every minute of it.

Derik Shopinski, who directed and choreographed this classic, is truly a favorite theatre artist of mine.  Whether he is directing or designing costumes, he knows how to make any theatre gem sparkle with fun and originality.  Kirsten Cunningham’s scenic design and J.W. Layne’s lighting put the finishing touches on this wonderful production.

Guys and Dolls, runs through February 10th and is recommended for all ages.