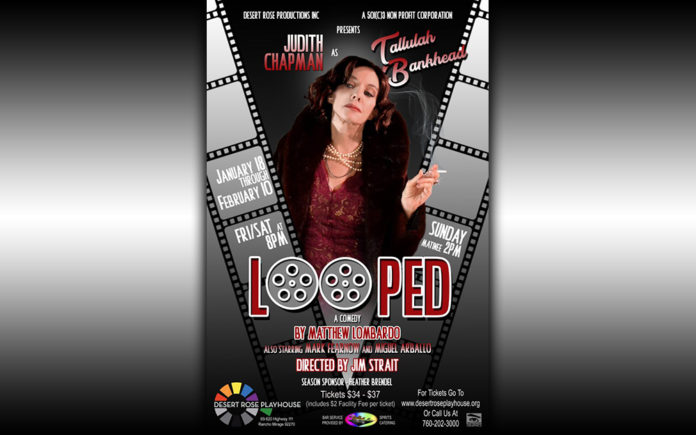 Any basic research on the legendary stage and screen star, Tallulah Bankhead, will reveal that she had a personality that was bigger than life.  She was sexy, witty, sassy and most often inebriated.  Her appetite for all things risqué was no secret.  She was quoted as saying, “if I had my life to live over, I’d make the same mistakes, only sooner.” A lover of men and women, Bankhead lived life out loud.

It is therefore no surprise that any creative work featuring this legendary actress would have a high mountain to climb if they wanted to do her justice.  Fortunately for all theatre lover’s in the Coachella Valley, Matthew Lombardo’s, “Looped,” currently in production at the Desert Rose Playhouse, achieves that goal and so much more.

The story is based on an actual day in 1965, when Bankhead spent eight hours in a sound studio dubbing (looping) one line of dialogue for her last film, ‘Die Die My Darling.’  Judith Chapman, in this compelling role, embraces the fervent fire that was Tallulah Bankhead. Chapman, who has had a distinguished career in T.V. and stage, gives the performance of a lifetime in her presentation of this multi-faceted icon.  Bankhead’s sarcastic and brilliant wit is presented with the perfect nuance of raw grittiness without ever going over the top into farce.  Gobsmacked, is a British slang term that means utterly astonished and astounded.  It is the perfect description of my response to Chapman’s portrayal of this iconic actress.  It’s a performance that defines and inspires the theatre’s tradition of standing ovation.

Mark Fearnow as Danny, doesn’t start out as a sympathetic character in his effort not to be eaten alive by Bankhead.  It’s Danny’s job to get that last single line looped into the film, and he had not planned to make a day of it.  Though Danny and Tallulah start out like two feral cats trapped together in a small cage, their secrets are slowly revealed and their conflict abated.  Miguel Araballo as Steve, the sound operator, is forced to bear witness to the outrageous and captivating session.

Bravo to Jim Strait who directed this extraordinary show. The staging was captivating and never redundant.  Bruce Weber’s wonderful Set Design, Phil Murphy’s lighting, Ruth Braun and Robbie Wayne’s Costumes all contributed to the chemistry of a truly magical theatrical production.  Congratulations to the Desert Rose Playhouse for continuing its run of quality theatre.