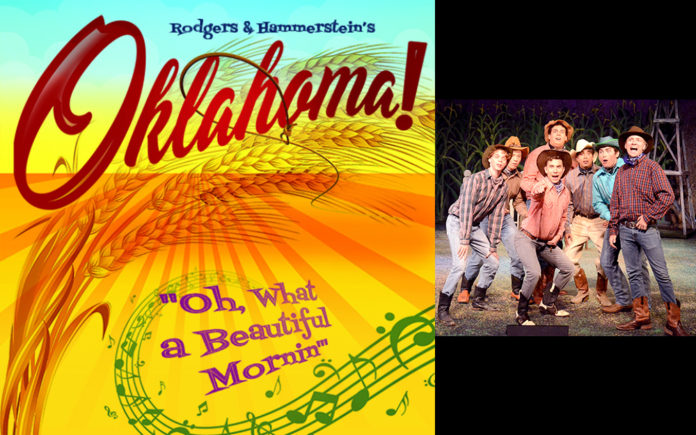 Theatre is often dramatic, comedic, political or tragic.  Sometimes it’s all of the above.  It can make you think, cry, laugh and feel connected to a hundred other people in the intimacy of a room where a common experience is transcending an audience beyond contemporary place and time.  Palm Canyon Theatre opened their production of Richard Rodgers and Oscar Hammerstein’s “Oklahoma!” to a packed house and a standing ovation this weekend.  It was reminiscent of a fun, feel good, old-fashioned night at the theatre.

Oklahoma!, Rodgers and Hammerstein’s first musical collaboration was based on the 1931 play “Green Grow the Lilacs,” by Lynn Riggs.  The original production of Oklahoma! opened on Broadway in 1943 and was an immediate success.  Subsequent productions went on to win a Tony Award and a Pulitzer Prize.

Oklahoma, is a simple love story set in 1906 Oklahoma territory. (Oklahoma became a state in 1907.)  It opens with Cowboy Curly McLain, (Christian Quevedo,) entering the stage from the rear of the theatre, singing the character’s iconic song, “Oh What a beautiful morning.” Quevedo’s voice is strong and captivating and I dare you not to immediately feel good when this melody fills the auditorium. He kicks off the show with a powerhouse performance that immediately captures the audience.  McLain is smitten with farmer Laurey Williams, (Kaitlyn Farley,) who lives with her Aunt Eller, (Suzie Thomas Wourms.)  Farley’s operatic voice is truly exquisite.  Both Quevedo and Farley, share wonderful stage chemistry and their flirty performances make watching Curly and Laurey’s, ‘come here/go away’ relationship so entertaining. Thomas Wourms, as Aunt Eller is the matriarch of this show and she seems to weave her magic through any scene she’s in, making sure that the outcomes go as planned.

Curly has come to ask Laurey to the ‘Box Social,’ a community event where men bid on lunch baskets and whomever wins each basket will eat the lunch with the woman who prepared it. Curly asks Laurey to go with him, but she refuses and instead agrees to go with her strange and disturbed farm hand, Jud Fry (Paul Grant.)

There’s a ballet sequence where Laurie dreams of what marriage to Curly would be like.  Mat Tucker (as dream Curly,) Brandy Valentine (as dream Laurie) and Samuel David (as dream Jud) performed an incredibly moving and mesmerizing ballet sequence of Laurey’s dream about her idealic life with Curly and her fear of Jud.

I have to admit that two of my favorite performances were by Emilia Jimenez as ‘Ado Annie’ and Anthony Nannini as ‘Will Parker.’ These two captured my attention with their stellar performances.  This cast ensemble was especially of note.  Thirty-nine actors ranging in age from 8-80, (or thereabouts) sang, danced and brought a whole spectrum of talent and skill to this production.

Derik Shopinski directed and choreographed this production and he is truly a desert treasure.  His all around talent seems to know no limitations.  Shopinski, makes full use of the theatre with his staging and presentation of this classic show.  His choreography is seamless and engaging and even his costuming talent is spot on.

The live band under the direction of Jaci Davis is always a favorite part of any Palm Canyon theatre show.  I loved J.W. Layne’s set design.  It took me right back to the farms and barns of early twentieth century Oklahoma.

If you’re looking for a fun, engaging, classic night of theatre, be sure to go see Palm Canyon Theatre’s production of ‘Oklahoma!’  Running through October 7, 2018.