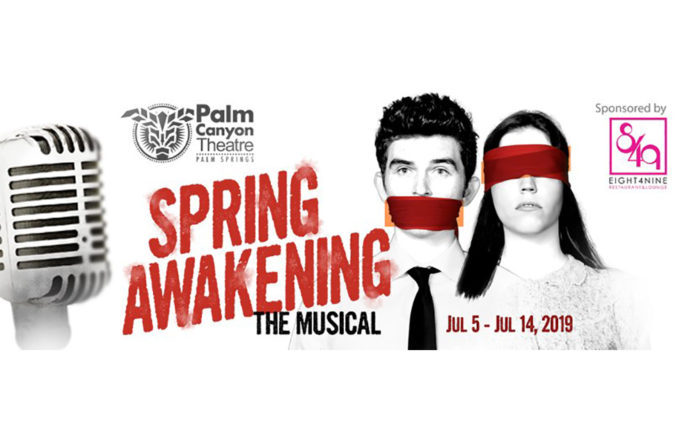 It is so rare that I see a show that can be defined as a true, beautiful and breathtaking, tragedy.  Contemporary audiences normally prefer to see a little sugar sprinkled on top of everything, making the realities of life easier to swallow.  But sometimes the raw and exposed nerve of an experience cannot be sweetened, it must be tasted with all of the bitterness in order to fully appreciate the magnitude of the story.

Spring Awakening, the Grammy award, Multi-Tony Award winning rock musical by Duncan Sheik with book and lyrics by Steven Sater, is based on the 1891 German play by the same name, written by Frank Wedekind. Luke Rainey directs this hauntingly brilliant production, currently on stage at the Palm Canyon Theatre.

Despite the upbeat and light hearted title, Spring Awakening is a story about the tragedy of adolescence when teens are covered in a shroud of conservative silence and denied information and insights to their own emotions, insecurities and desires. 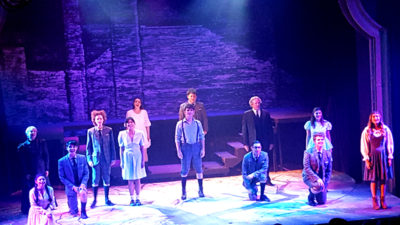 This musical is an experience that could best be compared to following Alice down the adolescence rabbit hole.  Set in late nineteenth century Germany, from the opening plea for understanding, Wendla, (Jamie Leigh Walker,) belts out “Mama who bore me,” in an urgent plea for an understanding of the life lessons a young girl should learn.  Instead her mother, (Morgana Corelli, who portrays all of the adult women,) simplifies and minimizes the answer, leaving her daughter still at a great loss for understanding the complexities of sex and her own body.

In the boy’s classroom, a group of teens rotely recite Virgil in Latin and give evidence to the strict education they are given. When Moritz, (M. Carrick O’Dowd,) misquotes a line, the teacher’s response is harsh and swift, indicating that they are allowed no room for mistakes. Moritz’s classmate, Melchior, (Nicholas Sloan,) is an intelligent student who questions the world around him and the status quo and therefore is deemed a delinquent.   Melchior, attempts to reason with the instructor on why Moritz could have been correct in his answer, but critical thought is dismissed in this suppressed and oppressed learning chamber.

O’Dowd, took my breath away in his role as the emotionally confused and rejected Moritz. His rendition of, “And Then There Were None,” was truly an inspired performance not to be missed.  Walker and Sloan in their roles as the teen couple, Wendla and Melchior, sew the tragedy of their circumstance together with heartbreaking results, as both soar to new heights with their stellar performances in this dark musical.

A gifted and talented ensemble brings this award-winning script to the stage with all of the angst and tragedy of puberty.  It is a story that most teens (or former teens,) will easily see themselves reflected in its fractured portrayal of youth.

Marella Sabio’s choreography is mesmerizing.  The dances are so fluid and move in such wonderful harmony with each note of the haunting music. Scott Smith’s musical direction provides the backdrop for this unique rock musical.   J.W. Layne’s scenic and lighting design as well as Derek Shopinski’s costumes rounded out the professional highlights of this top tier production.

Palm Canyon Theatre’s production of Spring Awakening, is running through July 14th, and is a show not to be missed.  This is real drama at its best.