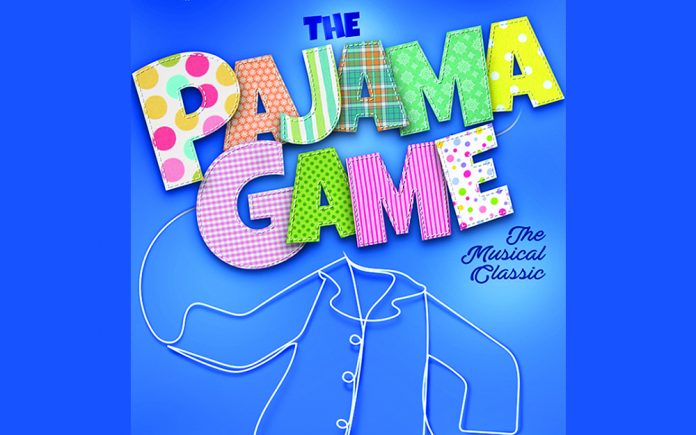 I’ve always viewed theatre as a mirror.  A reflection of our culture, our ideas and our belief systems.  It can serve to highlight the best of who we are and the worst.  Our perceptions and definitions of drama and comedy change as times passes and new beliefs take hold.  The presentation of classic works can at times be realized to be not classic at all, but simply outdated. Unfortunately, such is the case with Palm Canyon Theatre’s current production of “The Pajama Game.” 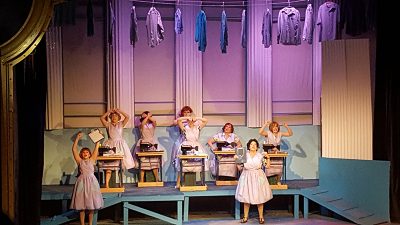 Based on the 1953 novel, 7 1/2 Cents, by Richard Bissell, the original Broadway production was first produced in 1954.   The book is by George Abbott and Richard Bissell with lyrics by Richard Adler and Jerry Ross.  The musical portrays the conflict between workers in the Sleep Tite Pajama factory, who want a 7 ½ cent raise and management who refuses to give it to them.  And in the process, of course, a typical opposites attract, conflicted love affair develops between a union representative and a management supervisor.

Sid, (Nicholas Sloan) is the new factory superintendent. When he meets ‘Babe’, (Jamie Walker Sloan,) the head of the Grievance Committee, it’s an immediate attraction.  She resists and he persists in the midst of the Union conflict.  Sloan and Sloan (a real-life married couple) are wonderful in their roles as Sid and Babe, the star-crossed lovers.  Both are very talented performers and their chemistry is obvious.  David Brooks is ‘Prez,’ the philanderer who represents the union. I love Brooks, he’s a gifted performer and I thoroughly enjoyed his performance, but in all honesty this role is superfluous and wouldn’t even be necessary if not for the blatant sexism of the times.  It would have made for a much better story and more conflict if ‘Babe,’ had been the head of the Union, a position not recognized as fitting for a woman in the 1950’s, but that might have made the conflict even more exciting. 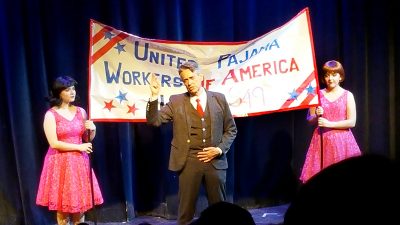 The cast is filled with incredibly talented actors who stand out individually, as well as an ensemble. Without doubt they make the show.  But the level of sexism, outdated dialogue and predictable plot developments make this show a bit tough to watch.  I normally really enjoy the live musicians that accompany Palm Canyon Theatre’s shows, but this time around I could only identify a select few musical numbers that stood out. ‘Steam Heat,’ performed by Charly (Anthony Nannini,) and Eddie, (Rob Rota,) was a sure favorite, as well as ‘Her Is,’ with Prez, (David Brooks,) and Gladys, (Morgana Corelli.) 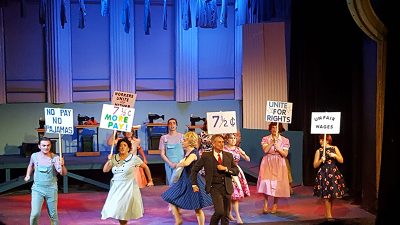 Union rights and worker’s rights are an important subject.  Though equal pay for women would not even be considered a substantial topic of law until the mid 1960’s, women have had a long history of supporting and working within Unions.  Beginning with the Triangle Shirt Factory fire in 1911 when 146 women died due to horrifically unsafe working conditions, (still remembered as one of the deadliest industrial fires in American history,) women have marched, bled, fought and labored for fair wages and safe working conditions for all factory workers.  Maybe it’s time for Babe, to get that Union promotion.

The Pajama Game, is running through March 15th.