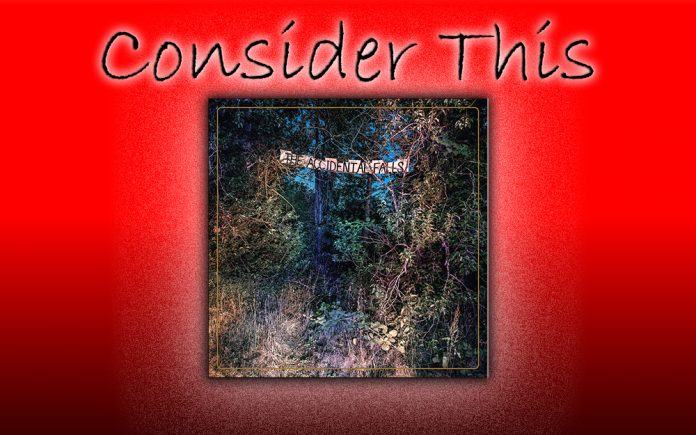 Around the time puberty struck, Chris Slausenko received an R.E.M. record as a present, and it pretty much changed his life. It had never occurred to him that music could be mysterious and catchy in equal measure. Chris sent them a letter asking the Athens, Ga. band to tour the Northwest. He actually received a reply from guitarist Peter Buck who suggested Chris check other up-and-coming bands like the Replacements, Minor Threat and Mission Of Burma. Inspired, Chris followed his own musical dreams and went on to play in a series of bands in the Portland, Oregon area. These days, his band, Eyelids count Peter Buck as more than a friend and mentor; he’s just produced their latest effort, Accidental Falls.

The members of Eyelids have been referred to as indie rock royalty, and that’s a fairly accurate assessment. The band features Chris and John Moen both on vocals and guitar plus Jonathan Drews on guitar and vocals. Holding down the bottom is bassist Jim Talstra and drummer Paulie Pulvirenti. Individually, these guys have been in the Dharma Bums, Guided By Voices, Stephen Malkmus & The Jicks, The Minus 5, Elliott Smith, Decemberists, Quasi and The Boston Spaceships.

Chris and John had been pals forever, having first crossed paths in the mid ‘80s when John was in the Dharma Bums they shared some live dates with Chris’ band, Death Midget. They finally got to officially play together when Guided By Voices visionary Robert Pollard recruited them for his Boston Spaceships project. Following a tour promoting the Spaceships’ Let It Beard album, the pair decided to revisit some demos they had written at the beginning of the 21st century. Feeling they could improve on the original songs, they enlisted John Drews, Jim and Paulie.

Once in the studio they created 13 songs on the spot and the result was their 2015 debut, 854. Their sound seemed to distill their indie ‘80s roots and stealthily paid homage to musical heroes like R.E.M., L.A.’s Paisley Underground bands as well as the Clean and Straitjacket Fits from the New Zealand label, Flying Nun.

Critical acclaim was unanimous and the band had time to record a self-titled EP before hitting the road, opening for everyone from Tommy Keene, Drive-By Truckers and Charlatans, U.K. Back in the studio they quickly wrote another 12 tracks and this time, Chris’ erstwhile pen-pal, Peter Buck, was behind the boards producing their second long-player, pithily entitled or.

Released in 2017, it was clear the band was on a roll, rave reviews popped up in tastemaker publications like Pitchfork, Glide and Mojo. This time out Eyelids were on tour with Paisley Underground stalwarts The Dream Syndicate, as well as the Fruit Bats, the Cribs and Drive-By Truckers again.

The last three years have seen the band collaborate with John Cameron Mitchell (of “Hedwig And The Angry Inch” fame) and Jay Gonzalez, on a 12” EP and 7” split single, respectively. They also recorded a limited edition vinyl LP, Maybe More that was evenly divided by studio songs and a live set. Now the band has returned with their third full-length effort, The Accidental Falls, featuring lyrics written by Larry Beckett.

Chris had struck up a friendship with Larry when their kids attended the same school together. As a poet, songwriter and arranger, Larry’s career stretches all the way back to the mid ‘60s. Originally, he and Tim Buckley were in a band called the Bohemians. Although Tim signed with Elektra Records as a solo artist, he continued to collaborate with Larry on his first few albums. They worked together sporadically until Tim’s untimely death in 1975. Their epochal “Song To The Siren” has stood the test of time, and has been recorded by everyone from This Mortal Coil to The Chemical Brothers to Robert Plant.

Larry familiarized himself with Eyelids music and invited the band to peruse his lyrics notebook. Chris and John initially assumed a new single might evolve from the nascent collaboration. They weren’t sure if Larry’s lyrics would resonate, and were (obviously) somewhat intimidated by the shadow cast by Tim Buckley. But both were by turns surprised and intrigued by his lyrics, some decades old, some minty fresh. Separately, Chris and John each set lyrics to new melodies. Before they knew it, they had 12 new songs.

The record slips into gear with “Dream.” The listener is greeted with an insistent wash of strings, as plangent electric guitars pick out the notes of the meandering melody, tip-toeing over purring bass lines and a loping rhythm. John’s vocals are hushed and ethereal as he recalls perfect naiad that inhabits his dreams; “In her eyes the salt of the seven seas, in her eyes salvation/Underneath her silk is the milky way and her constellation.” Acoustic licks jangle over shuddery electric riffs bookending each verse, pitching the song to and fro.

Most of the guys in Eyelids came of age in the mid-to-late ‘80s, just as the chrysalis of New Wave had transformed into Alternative Music. Artists like Cocteau Twins, The Pixies, Husker Du, XTC and This Mortal Coil, were the alternative to feculent, paint-by-numbers bands like Bon Jovi, Poison and Whitesnake. That halcyon era continues to shape their melodic sensibilities.

Take “The Minutes.” which hurtles out of the speakers boasting tilt-a-whirl guitars, wily bass and a whipcrack beat. Chris’ breathless vocals mirror lyrics that slyly bemoan the passage of time; “The daylight is a hustler, the sky is quickly crossed, I cannot sweep the stairway, before the sun is lost.” Clocking in at under two minutes, the song is crisp and economical.

There’s a shivery urgency to both “Ceremony” and “At Sea.” On the former, liquid electric guitar cascades over a rumbling bass and a pummeling beat. Lyrics offer a convoluted covenant to nuptial bliss; “No vows, but who can keep a vow? I said my line, my love for you isn’t in the heavens and yet it’s to.” The arrangement powers down on the break, and the instrumentation becomes blurred and pastoral before revving up as the guitars sync up for a stratospheric tandem solos and then circle back to the first verse.

The latter weds Punky guitars to a blistering backbeat. Chris’ boyish tenor glides over fuzzy, connect-the-dot riff-age, fractious piano and roiling bass. A series of guitar solos unspool, brief and efficacious, initially echoing the AOR grandeur of “More Than A Feeling” era Boston before shapeshifting into a jagged fragments of feedback.

The best tracks here balance the sweetness with some skronk and the results are perfectly sublime. The title track is tensile and stripped-down. As Paulie pounds his kit with a Moon-like intensity, spitfire riffs collide with downstroke notes and ricocheting bass lines. Stream-of-conscious lyrics like “I wish I was on the pine porch of a spare house, where light’s lavish, old movie stars, look down and wonder, Oh baby, what’s happened to you” adds a bit of pulchritude to the proceedings. By the outro things become positively Beatlesque.

Conversely, “River” is shimmery and incandescent. Gossamer guitars brush up against willowy bass runs and a slo-mo rhythm. The ethereality is slightly undercut by this admission; “Kiss me I slap, slap me I kiss, I’ve had enough of love me tender.” But the cynicism rings hollow next to the achingly beautiful arrangement.

“Starlight” is an irresistible slice of Power Pop propelled by prowling bass lines, a walloping kick-drum beat and crunchy, candy-coated guitars. Lyrics obliquely make the point that time is fleeting, but this song feels like a quick trip in Mr. Peabody’s WABAC machine. The listener is instantly transported to an epoch when Todd Rundgren and The Raspberries ruled the airwaves.

Then there’s the billowy siren song of “Mermaid Blues.” Rippling guitars collide with briny bass fills and a tick-tock rhythm. The lyrics paint a vivid picture of an elusive enchantress eager to tempt beguiled sailors; “I saw her breasts were bare, was that for me? They warned me going leagues beneath the sea, to liquid rendezvous, the mermaid blues.”

Less than a minute long, “Monterey” is a pensive haiku that blends bendy guitars and echo-y piano before folding into the album’s centerpiece, “1,2,3.” Jonathan, Chris and John alternate between prickly power chords, skronky dissonance and slashing shards of guitar Jim’s search-and-destroy bass lines anchor the low end in aggregate with Paulie’s bludgeoning backbeat. The trenchant arrangement echoes the angular attack and coiled menace of antecedents like Gang Of Four and The Dream Syndicate, before suddenly downshifting on the bridge which goes for baroque, adding strings and piquant and distaff harmonies to the final verse; “Winter, Spring is what we have to sing/Summer, Fall on this sea-breaking wall.”

Other interesting tracks include the sparkly chime of “Insomnia.” Eyelids also acquit themselves nicely with a cover of the lost Larry Beckett/Tim Buckley gem, “Found At The Scene Of A Rendezvous That Failed.” The album closes with the Bluesy shuffle of “Passion.”

Along with Peter Buck handling production chores and a little bass, Eyelids were ably assisted by Kyleen King on strings and vocals, Larry Beckett on piano and harpsichord and Victor Nash on trumpet and French horn. Charlie Campbell enigmatically provided “the gimmick,” certainly the record wouldn’t have been the same without it.

To paraphrase Humphrey Bogart at the end of “Casablanca,” this Eyelids/Larry Beckett experiment looks like the beginning of a beautiful relationship. As the Grateful Dead relied on lyricist Robert Hunter, perhaps Eyelids and Larry Beckett can forge the same sort of partnership, eschewing, of course, the Jam-Band esthetic and confused dancing.