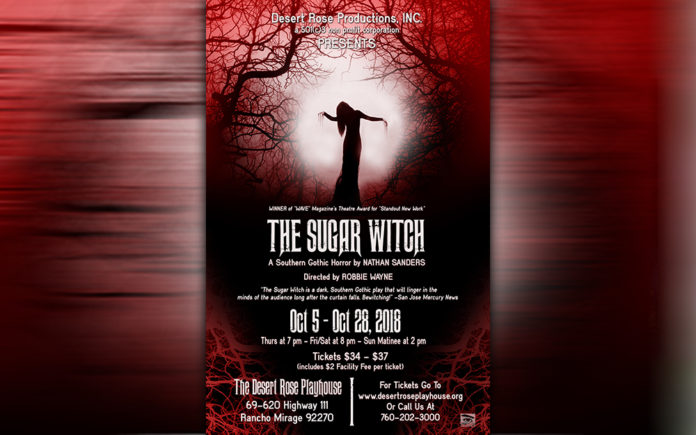 Once in an eon, a stage play will be so incredible and so impactful that it leaves you reeling with images and dialogue still pounding against your brain long after the curtain has come down.  Such is the case with the Desert Rose Playhouse’s production of Nathan Sanders’ drama, “The Sugar Witch.”  In the style of Tennessee Williams, this is a drama that unfolds in shocking splinters that shatter across the stage and penetrates the psyche.  The audience is cast as helpless bystanders witnessing a hurricane that is blowing each character’s life apart.   I don’t remember the last time I saw a play, (that is not a polished Broadway show,) so absolutely incredible.  The Sugar Witch, truly defines why I love theatre.  I was mesmerized by every nuance of this show and even now find myself struggling to articulate how wonderful this play is.

Southern, gothic, drama sets the stage for the Bean family, living under an ancient curse in the Florida swamps.  Generations of family secrets haunt the Beans and every moment of this story will have you holding your breath to see what comes next.  Leanna Rodgers, as Sisser Bean, gives an award winning performance. Rodgers gives one of the most phenomenal and unparalleled performances I have ever seen on any stage of any size. She defines crazy in a whole new light and will pull you in from the moment she speaks her first line of dialogue. Kimberly Cole (Annabelle, The Sugar Witch) weaves potions and spells and is the glue holding this shattered family together.  A star-crossed love pulled her into the middle of this family drama and Cole, does not disappoint in her exceptional performance of this wise and tragic character.  Moses Bean, (Jacob Samples) a young, normal and earnest guy is doing his best to be the caretaker and breadwinner, but upon meeting the likeable and compassionate Kelly Peak (Hank Hartley,) Moses’ virginal life seems to at last found love, if only the ongoing horrors of the family curse will let him go.  Samples and Hartley have wonderful chemistry and you will find yourself rooting for them from the moment this ‘gentleman caller,’ pulls up in his hearse.

Ruth Ann Meeks, (April Mejia) in her crazed and unrequited pursuit of Moses Bean, unleashes the final chapter in this drama and pushes the Bean’s teetering edge of sanity right over the cliff.  This entire cast of actors was so authentic and genuine in their dysfunction, that not a single one of them ever allowed the audience to avert their eyes from the oncoming crash.  Even Tim McIntosh’s brief presence as Brother Meeks, Ruth Ann’s volatile sibling, was breathtaking in his raw and provocative performance.

I especially loved the integration of gay characters into a story that was not about ‘being gay,’ but rather an exceptionally well-written script that featured characters who happen to be gay.

Every element of this production was top notch and professional.  Toby Griffin’s set was spectacular.  It was a character all on it’s own with the wooden porch serving as the center of this drama.  I will admit that I frequently take lighting for granted, but when it’s this good, it’s impossible not to notice the valuable contributions Phil Murphy’s lighting design made to the show.

Bravo to Robbie Wayne who has taken the controls of the Desert Rose Playhouse with a bang!  His selection of this incredible script, skilled direction, producing and even sound design for The Sugar Witch, has brought desert theatre to new professional heights.

This is a show that will resonate long after the curtain drops. I can’t emphasize strongly enough that if you love good theatre, go see the Desert Rose Playhouse’s production of Nathan Sander’s, “The Sugar Witch.”