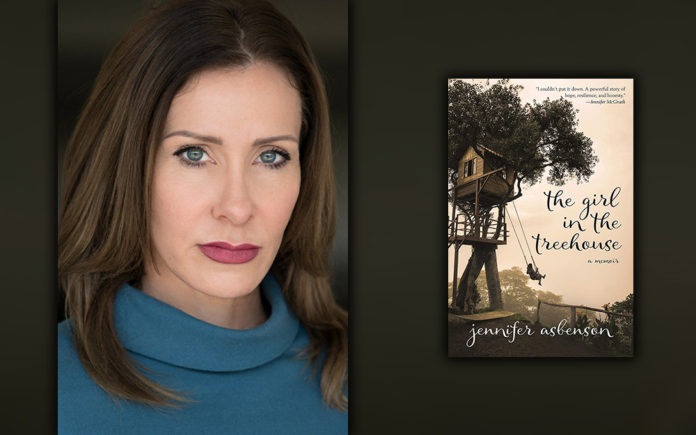 —–
The Girl in the Treehouse
by Jennifer Asbenson – Memoir
—–

For many, childhood is hardly a state of sustained bliss and making it to adulthood without trauma can be a challenge.  In The Girl in the Treehouse (Amazon, 235 pages), kidnapping victim Jennifer Asbenson reflects on her life and how she survived.

Asbenson begins her memoir with a personal note to the readers whom she addresses as “Dear Warriors.”  She encourages others to “Love yourself” and says “Your will is the magic wand that can turn your dreams into reality.”

What makes Asbenson an expert on self-perseverance is that she not only survived an abusive, dysfunctional and difficult childhood, but escaped a notorious serial killer.

Asbenson’s story begins in the Coachella Valley as her family struggles to put down roots.  All seems normal until her baby brother has crippling seizures. Challenged emotionally, financially and physically with a disabled son and two small girls, Asbenson’s parents changed.  Her father begins to drink and her mother becomes abusive – specifically taking out her frustration and anger on little Jennifer.

At one point, Asbenson and her family lived in a trailer on a family compound in Sky Valley where her grandmother encouraged her to trust and call on Jesus when in need.  Family life was hard for Asbenson.  She went to school in Desert Hot Springs wearing the same clothes every day.

Moving to Morongo Valley, Asbenson’s father constructed a geodesic dome where, for a time, they lived without running water or electricity.

As a teen, Asbenson got a job caring for disabled girls in a group home.  She loved making connections with the children and knew she was making a difference in their lives.

Once, when she missed her bus for work, she took a ride from a stranger.

That stranger picked her up the next day and tried to rape and kill her, but Asbenson escaped!  When she reunited with her mother, she doubted her daughter’s horrific story.

Asbenson struggled with PTSD and feared her attacker would come back for her.  For several years, she was in and out of mental facilities suffering from a variety of disorders, which caused her to doubt her own truth.

The police eventually had Asbenson look at photos of her possible abductor. With one hundred percent certainty, Asbenson identified Andrew Urdiales.  He had killed eight women.  She testified against Urdiales in court!

In telling her remarkable story, Asbenson does a beautiful job recounting her young life and the traumatic and terrifying kidnapping.  If escaping a serial killer isn’t enough drama, she reveals how she also freed herself from a mental facility where she was held and over-medicated.

There is a vivid account of an auto accident with Asbenson at the wheel driving down highway 62.  She extricated herself from her totaled car.

Asbenson shares personal moments during which she believes she was saved by divine intervention.  Her prayers miraculously answered.  These scenes are sincere, powerful and chilling.

The author recounts – writes — her story from her private space and sanctuary – a tree house in her Cathedral City backyard.  She speaks her truth as if sharing it with the reader over a bottle of wine or cup of tea.

There are shocking revelations about her mental condition, her need for attention, her mother’s multiple betrayals and the angels who appeared when she needed them most.  It is especially poignant when she confesses the first time she said, “I love you” was when forced by her abductor!

The Girl in the Treehouse is a compelling and provocative tale of survival, self-awareness and healing.  Asbenson is bright, thoughtful and sincere.  She writes with purpose, clarity and wit.  There is no hubris, bitterness or malice, only a mission:  “If I did it [survive], you can too.”

She dedicates the book to the women who did not survive killer Urdiales and includes a list of organizations and help-lines.

From Asbenson’s tree house, the innocent child gains perspective about her past and discovers her adult story is one of resilience and hope.