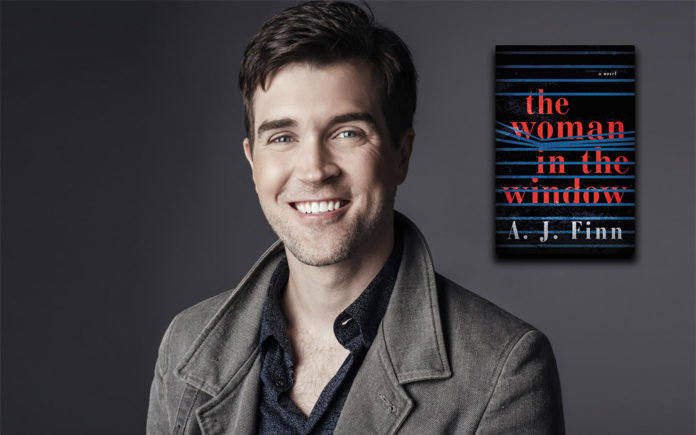 There is an epidemic in the United States and it is hardly getting the attention it requires.  Mental illness is a growing problem that crosses all socio-economic boundaries.  It is mostly treatable, yet continues to be taboo.  A.J. Finn’s The Woman in the Window (William Morrow, 431 pages) finds a lady alone losing her grip with reality.

The story is told in a first-person voice by the protagonist Anna Fox, a 38-year-old child psychologist who suffers from agoraphobia.  She hasn’t been outside in almost a year.  Medicated and drinking way more than she should, Anna enjoys watching her neighbors who live across the park from her New York townhouse.

Besides spying, Anna spends her days watching old movies, playing chess and counseling other shut-ins over the internet.

When the Russells move in across the way, Anna is intrigued by the family unit — father, mother, and teenaged son.  She Googles and stalks the family online.  She finds that they paid 3.4 million dollars for their townhouse.

Soon Anna meets the awkward teen Ethan Russell, who has come over on an errand for his mother.  She and Ethan develop an easy rapport.  Anna seems to understand the kid, while his parents, Jane and Alistair apparently do not.

Later, Jane Russell, visits Anna.  She and Anna hit it off and have a lovely evening drinking, playing chess and talking until late.  Jane asks Anna not to say anything about her visit to her husband because he is controlling and difficult.

Days pass and while spying on the Russells, Anna sees Jane stabbed, but she cannot see by whom.  After she calls the police, she tries to leave the house to help her friend who is dying but her mental illness gets the worst of her and she collapses between her building and the Russel’s.

Anna awakens in the hospital.  The police question her, but can find no crime and certainly no murder.  After searching Anna’s house, they discover lots of empty wine bottles and several open prescription pill containers.  They conclude that there was no murder and that she has imagined the whole thing blaming her mental condition, drugs and alcohol.

Once back at home, Anna must come to terms with what she thinks she saw and decide if it was real or a hallucination.

The Woman in the Window is another female centric thriller riding the long steady wave since the successful novel Gone Girl.

Author A. J. Finn capitalizes on this genre writing a smart, independent woman who, by herself, must determine her own fate.

As much as I love a first-person narrative, I’m not sure it was the best choice.  Anna is an unreliable narrator and she does not have a big picture view of her circumstances.  As great as that can be for a story, there was a lack of depth and insight in her character that might have been present with an omniscient voice.

At times, I wondered if the problem of sympathizing with Anna was because the author is male.  It’s interesting to me that for years women authors used initials so their gender would not deter potential male readers.  Curiously, the author chose to use his initials instead of his first name.

Regardless, for me, the first one hundred pages dragged and I’m not sure how much of it is necessary to the plot.  Then suddenly, it gets more interesting and the action picks up.  It is not a fresh idea and closely resembles the Hitchcock film “Rear Window.”  Like Jimmy Stewart, Anna too uses a camera to spy on her neighbors.  Why a camera and not binoculars?  She isn’t a photographer.  There was a lot that bothered me about Anna as a well-developed character.

But, I did appreciate Anna and her intense suffering.  Her problem is not only agoraphobia, but stems from a profound trauma and devastating grief.  Her alcohol abuse and over-prescribed drugs don’t help her as she tries to survive her troubled life.  The professionals around her do little to help and instead doubt her, passing her off as mentally ill and over-medicated.

Author Finn has had his own mental health issues and The Woman in the Window reveals one woman’s ordeal to regain her health and sanity.