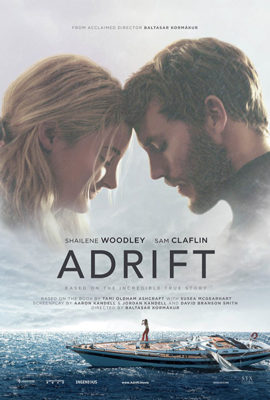 In September, 1983, 23-year old Tami Oldham Ashcraft and her British fiancé, Richard Sharp were hired to sail a 44-foot yacht from Tahiti to San Diego. At about the 2,000-mile mark of their 4,000-mile journey they were hit by the might of hurricane Raymond’s 145-knot winds.

Richard was washed overboard and Tami had a head injury.

The movie opens after the storm with an injured Tami (Shailene Woodley) lying in a cabin filled with water and floating debris. Tami struggles to the deck and sees Richard’s safety line dangling untethered. She thinks she sees Richard on a dinghy some distance away.

Tami repairs the badly damaged yacht as best as she is able – pumping out the rising water and mending the sail. She finally reaches the dinghy and with great effort rescues the critically battered Richard (Sam Claflin).

Director Baltisar Kormákur is adept and drawn to survival stories of humans pitted against big earth events, he directed Everest, but his deadly mountain avalanche movie pales in comparison to the harrowing, and gripping sea saga. The eye-popping storm effects and gorgeous cinematography put the audience in the center of the tightly paced adventure. Woodley is wonderful as the brave, tough and very relatable Tami. I never doubted her for a moment. 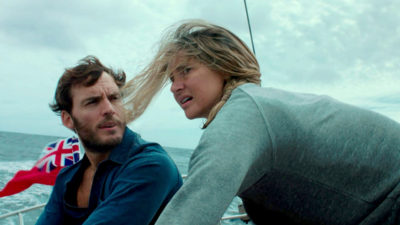 The movie intercuts the beginning of Tami and Richard’s chance meeting and ensuing romance on Tahiti with their frightful situation after the storm. There were moments when I was not sure if Tami was dreaming or hallucinating as she struggled to keep the only man she has ever loved alive.

As someone who has sailed the South Pacific and been caught in a squall, I was impressed at her determination to survive (on peanut butter) for 41 days but even more so to manually use a sextant to navigate.

Don’t miss this compelling and exciting love story and terrific adventure adapted from Ashcroft’s 2002 Red Sky in Mourning: A True Story of Love, Loss and Survival at Sea.

This fine film is much more than just another cinematic metaphor about female courage and empowerment, it’s really about our deep-seated human resilience and the all-consuming power of love. Strong recommendation for this unforgettable true story. 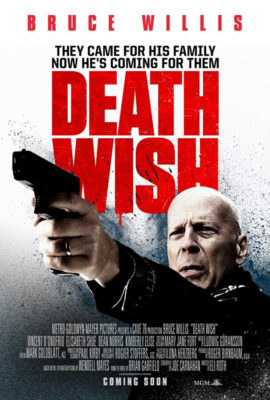 MGM pictures presents director Eli Roth’s reimagining of the 1974 revenges thriller Death Wish. Dr. Paul Kersey (Bruce Willis) is a surgeon who only sees the aftermath of his city’s violence as it’s rushed into his ER – until his wife (Elisabeth Shue) and a college age daughter (Camilia Morrone) are viciously attacked in their suburban home.

With the police overloaded with crimes, Paul, burning for revenge, hunts his family’s assailants to personally deliver justice. As the anonymous slayings of criminals grabs the media’s attention, the city wonders if this deadly avenger is a guardian angel or grim reapers. Fury and fat collide in this intense action-thriller. I miss Charles Bronson, but I bet he’d like this reboot of his 1974 cult classic actioner also based on Brian Garfield’s bestseller.