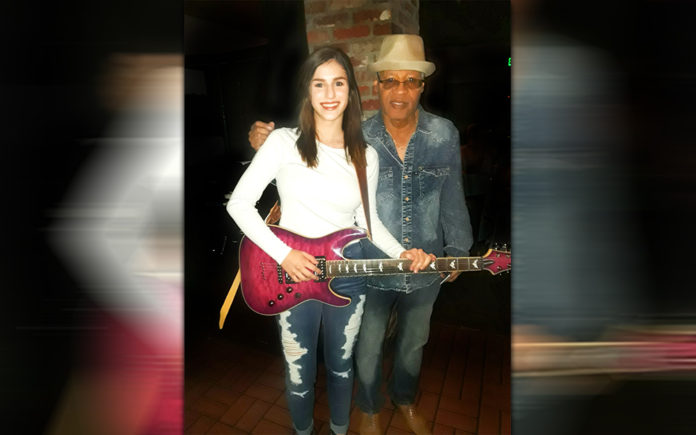 Abigail Carter has straight ‘A’s and is a magnificent musician. Outstanding desert guitarist and bluesman John Carey saw beyond the tangibles thanks to mutual friend Kathleen Sunshine O’Brien. John recently announced a guitar giveaway, which he does often, to a deserving young person. Kathleen was the go-between after seeing John’s Facebook post. Kathleen explained, “Abi’s mom, Andrea F. Engel Carter, saw my post about John giving away a guitar to a student and she messaged me and said she would love Abi to have the opportunity to win it.” John shared, “Abi was one of 12 young people that submitted their grades along with an essay on why they deserved this beautiful guitar.” Kathleen concurred, “The message it sends is if you work hard and do well in school, special opportunities may come your way when you least expect it.” Abi was awarded the gorgeous Schecter electric magenta guitar at Woody’s Burger in Palm Springs during one of John’s performances. Abi was invited by John to plug in her new guitar and performed with him and his band. Abi understands the need for education to be a priority. John identified that in Abi. “I chose Abi because of her overall plan to achieve greatness through education and understanding that education comes first.” Coachella Valley Weekly spoke with both John and Abi about the extraordinary experience.

CVW: What did you feel when you found out that you were chosen to receive the guitar?

Abi: “I was so genuinely shocked. I had never been involved in anything like this before. John Carey’s absolute selflessness baffled me so much to the point where I started crying. It was such a humbling moment for me.”

CVW: John, what message do you hope this sends to other young people?

John: “I hope that young people understand that there’s always someone watching what you do, whether it’s right or wrong. It’s better to be rewarded in a positive way than in a negative way.”

CVW: You received a lot of comments on Facebook about how deserving you are of this award. How does that make you feel?

Abi: “The constant support of my friends and family members continues to motivate me to become who I want to be. Knowing I already have people who will support me in what I want to strive to be is incredibly reassuring. I’m so grateful to have such a group of encouraging people constantly surrounding me.”

CVW: Your mom was the motivator for all of this. How much does your mom inspire you?

Abi: “My mom has always been my number one fan. She is always right beside me in every fight. Whether it’s a small piano recital or singing at large events, she is always cheering me on. She is my rock, my motivation, and who I strive to be like. I wouldn’t be the person I am today without her guiding me along the way.”

CVW: What one thing can you share with other people your age that has proven successful?

Abi: “I had the honor of performing in Open Call at the McCallum Theater with my mother about two years ago. It’s a competition in which people from around the valley can compete to perform in the final show. We won “Best Vocal Act” that year. I can’t take full credit for it all, but it will always be my favorite moment ever performing. Having my mom by my side and seeing her happier than ever will forever be a moment I will cherish.”

CVW: You are a musician yourself and a wonderful one at that. Where would you like to take your talents? Any chance you’ll incorporate the guitar into your performances?

Abi: “I have always had the goal of making people smile, whether I’m singing back-up vocals in a small restaurant or in stadiums with a guitar or piano, I’ll have deemed myself successful as long as it gives happiness to others.”

CVW: When will we see the Abi Carter & John Carey show again?

Abi: “I received the guitar at a restaurant named “Woody’s” in Palm Springs where Mr. Carey performs with his band every Sunday and Monday. After he gave me the guitar, he asked me to come up on stage and sing a song while playing my new guitar with him and the band. I hope to be able to perform with them again sometime soon.”

CVW: John, you are the prime example of giving back and paying it forward. What else can adults do to help the younger generation maintain this attitude of giving?

John: “Adults can begin to understand that these young people are our future and we have to make a commitment to them so that love and positivity remains the number one focus.

For the last five years I’ve given away some type of instrument or guitar pedals for cancer auctions or people that just need it. I will continue to give every year, rewarding young people for their hard work.”