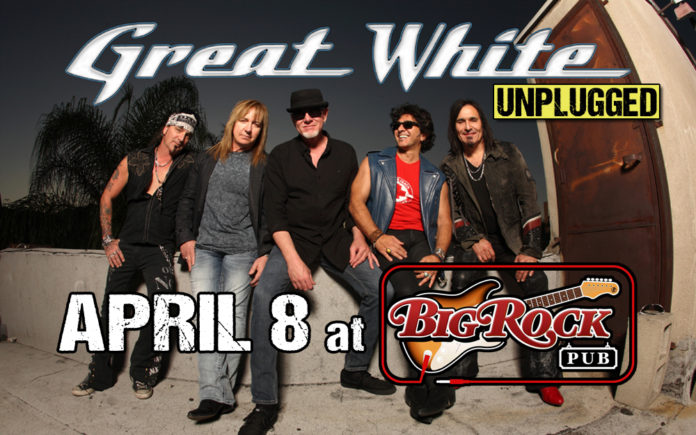 Great White fans rejoice – this iconic band stops into the Coachella Valley on April 8 for a rare, intimate acoustic performance at Big Rock Pub. I had the chance to speak to original guitarist Mark Kendall about what to expect from this special concert.

CVW: Will this be your first time playing at Big Rock Pub?

MK: “Yes, the first time playing there. We mostly play a lot of casino amphitheater type shows, and festivals over in Europe and around the country. So usually if we play a small place like this we do it acoustically instead of bringing full production into a small place. We do our songs in a different way. It’s rare. We do 60-70 shows a year and we might do 2 acoustic. We enjoy it because it gives people a chance to get a different look at our songs, with acoustic guitars as opposed to blazing electric guitars. It strips the songs down and it’s just fun. The intimacy of playing a small place is special. When you’re in a band, you want to play stadiums every day but you know the audience wants to see their heroes up close. It’s fun for the fans. We try to make it like Storytellers and take questions from the audience if there’s anything they always wanted to know. It’s not so serious, not arena rock. When we go on those Monsters of Rock cruises, all the rules are out the window. It’s not a constructed thing and we are mingling with 4,000 people. We get to talk to the fans and meet a lot of people. They have stories – I got married to one of your songs, I did your laundry in 1986 – things like that.”

MK: “For me with my heroes, I’ll hear a song on the radio and I know exactly where I was and I think it’s that way for people that like our music that certain songs remind us of a time in their life.”

CVW: “Once Bitten, Twice Shy” came out when I was in 5th grade and they always used to play it at roller skating, so that’s what it reminds me of.

MK: (Laughs) “That is so cool. I know from being a fan myself I’m the biggest geekiest fan ever. I’ve met most of my heroes and I’m so happy they’re so down to earth. A band like ZZ Top or Billy Givens are huge influences on tons of guitar players, it’s like they don’t realize how important they are or how big their influence is but to me it’s a huge deal to meet them and I’m so happy how kind, soulful and down to earth they are. The guys that want to be on that level  might not be very nice.”

CVW: It’s like with dogs, the beta dog is typically the aggressive one, where the alpha is calm and keeps the betas in line.

MK: “Exactly. An alpha dog doesn’t even realize it. He’s not all egoed out because he’s already doing so great. I’ve been on a bus talking to Johnny Winter explaining how massive he is to me and how much he made me want to improve and play guitar. You don’t want to meet your hero and have them be total jerks.”

CVW: What can fans expect at your Big Rock performance?

MK: “They will feel like they got to know us. We’ll be more candid. We’ve been trying to play California more. We’re doing the Cherry Festival in Banning. We all live out here except for Michael our keyboard player. I’m 40 min from Palm Desert so it’s fun to play California and hopefully run into a few of the old fans that saw us when we were up and coming. We are ready to play our hearts out. I always try to impress people as opposed to just being entertaining, but I want people jaws dropped and feeling they really got their money’s worth. I get excited – not nerves – but I’m anticipating the moment. We really aren’t tired of playing all our hits because it’s a new crowd and we continue to make new music so that keeps our energy up. If you were a painter and every year you sold the same painting you might tend to go through the motions but if you make new paintings but make the old ones available you’ll contribute to your own art to avoid being an oldies band.”

Get your tickets now – spots are limited and will sell out! https://tickets.thebigrockpub.com/e/great-white-unplugged