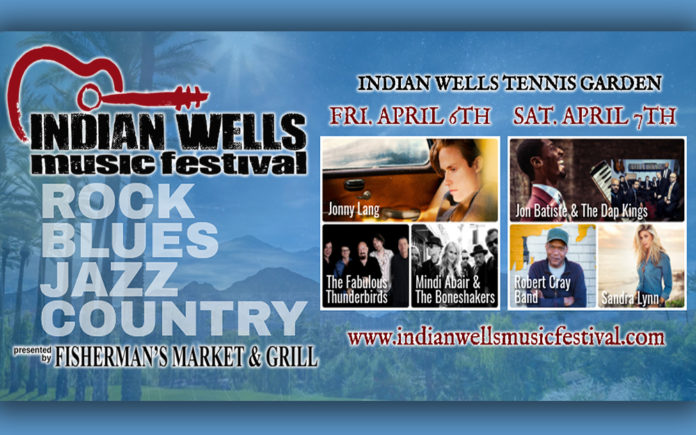 April begins “Music Month” in the Coachella Valley (also known as Festival Season) and with it there’s an event to suit every taste. Those who love huge name artists, crowds, and really short jean shorts flock to Coachella (Weekends 1 or 2, take your pick). Those who prefer their music with a twang and a great pair of cowboy boots scoot over to Stagecoach. For true music lovers who want to see some of the most talented rock/blues/jazz/country musicians in an intimate and refined setting, there’s the Indian Wells Music Festival in the Indian Wells Tennis Gardens. This popular festival has been on the Coachella Valley scene for two decades and has only gotten better with each year. This newly-expanded event is now two days long instead of one and is multi-genre, giving concert-goers the chance to see high caliber music talent in a rare and intimate setting. 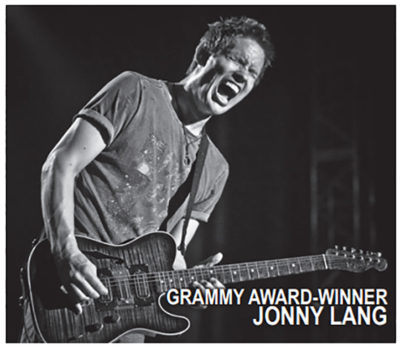 Friday, April 6, starts out with Mindi Abair and the Boneshakers, who recently released their first studio record. Mindi, two-time Grammy-nominated saxophonist, teams up with Randy Jacobos on guitar and vocals, Sweet Pea Atkinson on vocals, Rodney Lee on keys, Derek Frank with bass and vocals, and Third Richardson on drums and vocals. The powerful synergy of this collaboration is as funky as it is smooth with all of the talent packed into this group. Following them, are The Fabulous Thunderbirds whose blues rock sound has been wowing fans for over four decades. This high-energy group is considered the quintessential American band and their shows are as much fun as their songs are (Top 40 hit “Tuff Enuff” was featured in several movies). Headlining the night is Grammy award-winner Jonny Lang. A blues prodigy, Lang released his first album at 15, which subsequently went platinum. Lang has shared the stage with such musical legends as The Rolling Stones, BB King, Aerosmith, and Buddy Guy, but will be closing out night one of the festival on his own. 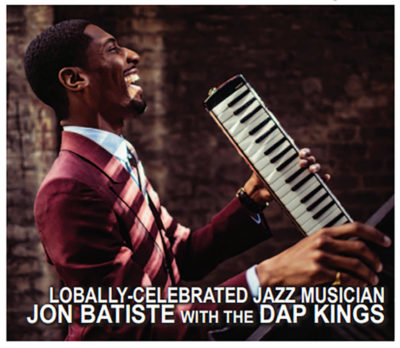 On Saturday, April 7, California native Sandra Lynn opens up the night’s performances with her sweet voice and upbeat country singles. Following her is the Robert Cray Band. Robert Cray is a five-time Grammy winner, Blues Hall of Famer, and a damn good musician whose sound is at the same time fresh and familiar. Headlining the night and closing out the festival is globally-celebrated jazz musician, Jon Batiste with the Dap Kings. This multi-instrumental Juilliard trained musician comes from a long line of musicians from his home state of Louisiana and is the perfect conclusion to this fantastic weekend of music.

Jimi “Fitz” Fitzgerald, who puts this event together and makes it better than ever each year, has teamed with the City of Indian Wells, who is now title sponsor. Fitz, who has produced festivals and television his whole life, has worked in all forms of music, including jazz, rock, blues, and country – all of which this festival covers. He found there was a market of music-loving fans that weren’t being served in the Coachella Valley – those who wanted an intimate setting in an upscale atmosphere. With the IW Music Festival, all 2,000 seats are reserved (and shaded). Attendees can choose to purchase VIP tickets, which have their own bars. Once purchased, guests can sit in their seat or wander around the main bar and concession stands. Said Fitz, “Those who have been to this event know how cool it is to turn the pavilion into a performance space. The artists themselves are really excited about this event. They love the multi-genre aspect and are all fans of each other. A lot of them will be there both nights to listen to the other acts.”

“This is the perfect way to kick off Music Month. It gives people who aren’t normally festival-goers a classy weekend of music, food, wine, and art. It’s an unusual opportunity to see all these various type of talent in one weekend in this intimate a setting.”

The Tennis Gardens underwent a beautification program that made the grounds warmer, more welcoming, and beautiful, called Lifestyle Village. In Lifestyle Village, festival-goers can enjoy sculpture installations, fine art, food vendors, and more. In between music sets, guests can grab delicious eats from various food vendors, such as Fisherman’s Market (also the presenting sponsor) and Wildest Greens. They can walk the grounds and visit with world-class painters, jewelry designers, and other artists. World-famous artists, Tony and Karen Barone, are doing a sculpture installation on grounds. The gates open at 4:30. Opening acts start at 6:30PM each evening and there are 30 minute breaks between acts. Attendees can take advantage of free parking.

To find out more and to purchase your tickets, go to http://www.indianwellsmusicfestival.com/ or call The Box Office 1-800-999-1585