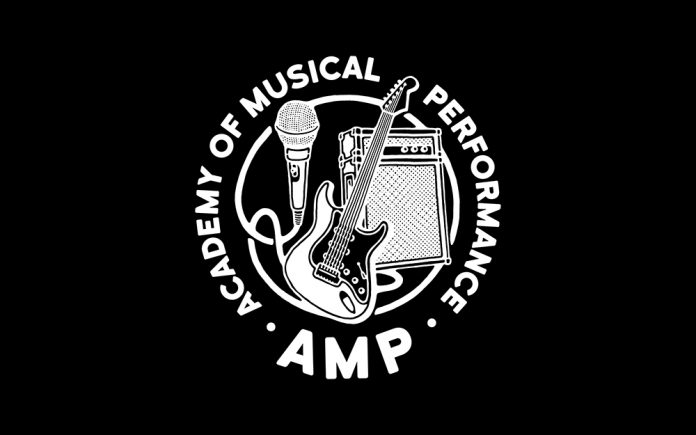 The Contemporary Music Education Resource for the Coachella Valley

The Coronavirus pandemic has forced all learning opportunities to be facilitated via online programs. We are redefining learning as we speak. The Academy of Musical Performance has chosen to adapt to the new environment by continuing to strive and enrich the lives of young musicians living in the Coachella Valley.

Coachella Valley Weekly caught up with AMP Executive Director Will Sturgeon to bring us up to date.

“This quarantine has affected AMP, we aren’t able to have our yearly fundraiser but is has forced us and our students to be creative in a way that is really special. We only have so much time with these kids during these programs and the bulk of the time has been geared towards performing live, writing music and collaborating with a band live. There are so many benefits coming out of that experience alone. We are an after school program so we really don’t have the time to dig into recording, promoting.” 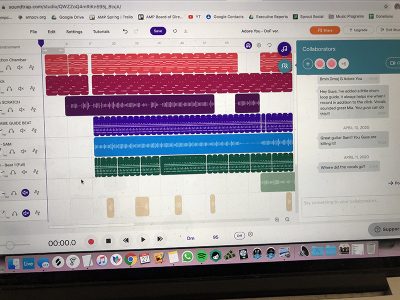 “As it has for everyone, it’s been a crazy month and a half. We were 2/3 of the way through our spring session where we put bands together for 12 weeks and they get to rehearse sets to play out in our community. They just started playing shows after eight weeks of rehearsal. We had to stop rehearsing physically with four weeks of programming left. Each band stuck with their weekly rehearsal times on Google Hangouts and we found a technology called Soundtrap a remote program that enabled them to share music and collaborate in real time with their bandmates. The online studio gave students the ability to record, edit, and collaborate, on any device. It allowed AMP students to record from their bedrooms. AMP has been mostly focused on performance and songwriting. We only touch on recording during our summer camps. For a lot of these students, it was their first recording experience and they had to do it with whatever technology they had. With their band coaches and my remote support, we got through it all. The great news is consumer technology is good enough to capture the gist of what’s happening. Singers were plugging in their headphones with their microphones and recording their vocals. Guitarists were putting their amps up on their computer desks and recording through their laptop’s microphone. Drummers were learning to get the hang of programming drums. Instead of recording drums through a microphone they put in dots that trigger samples of drums, so they’re virtual drums.” 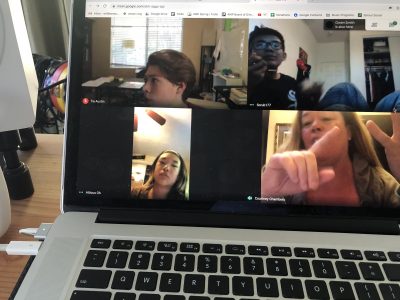 “Through all this, our four bands learned to record on their own equipment in the span of three weeks and now we have six songs from these four bands that we’re going to put out as an AMP album which we’re really excited about because AMP has been around for five years this is our sixth year of summer camp and we’ve never had an AMP album even though we’ve had so much great music and musicians. This is a really exciting opportunity for us. I am currently in the process of mixing these songs. Instead of a final showcase we have this AMP album for the spring session. Also, we have so many great AMP alumni bands like Pescaterritory, Silver Sky, Israel’s Arcade, Kayla, Mia, Cort, Screams on Silence, I thought this would be a fantastic opportunity to feature their recordings as well. Side A will be the songs that were recorded by spring session bands and Side B will feature our alumni recordings which will include some new songs never heard before. We’re looking to release the album in early summer where we will run a couple-week fundraising campaign to get people to become AMP Angels to hear the album before it’s released.”

“AMP has developed Rockin’ On, a business development program for AMP bands that uses music as the vehicle for teaching entrepreneurship. The course is offered to our students who have formed their own bands outside of AMP who want to take their music to the next level and learn more about the business side of things like how to book a show, promote a record, book studio time and use their social media. When we were forced to move online, we brought in aspects of that program to AMP spring. We had the four bands create their own Instagram account and focus more on the branding and promoting side of things. I’m working on ways we can better integrate all that stuff into our future AMP programs moving forward. In AMP Summer Camp and AMP’s year-round programs, musicians learn how to write, rehearse, and perform music in a new community of musicians. So, it’s no surprise that many of our students go on to form bands with their peers outside of AMP. Bands will identify their goals, develop release plans for their own music, book their own shows, make merchandise, learn the basics of branding and advertising, and understand how to healthily run a business that provides services.” 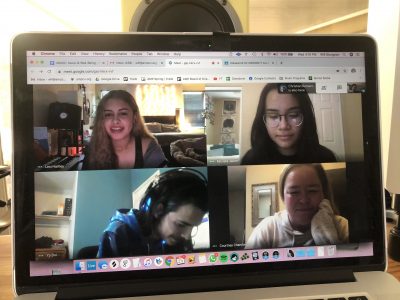 “We have great local band coaches and musicians who have worked with kids as well as being active gigging musicians in the community including independent artist Courtney Chambers, Abie Perkins who is in Shaken Not Stirred, an incredible musician who has been in AMP since the beginning, Rob Peterson who just started with AMP last summer who is in Ghost Notes and a handful of other projects like The Pedestrians, he’s incredible and has been such an asset to AMP and Matt Makkai, who was an intern at AMP the first couple of years and in the past few years he’s been a band coach. He graduated from California Institute of the Arts doing all sorts of crazy art music. We’ve also had wonderful teachers like Humberto Vela, Calvin Williams, Juan Espino, Jeanie Cunningham, Susan Benkin and Bill Saitta. We’re really blessed to have a great lineup of coaches. I think one of the greatest parts of our program is that it gives a pathway to do and learn stuff that they want to do. For AMP teachers, we have it much easier than the school system because we have kids who want to be there who are interested in learning in music. All they need is the knowledge and support of mentors.”

“AMP is proud to offer private lessons to interested students of all-ages in the Coachella Valley. The program was rolled out this spring and then the pandemic occurred. However, we are still able to offer these lessons via Zoom. It connects students with a teacher who will work with them for 30 minutes to an hour on instruments like the piano, guitar, keyboards, bass, drums, vocals and everything in between. This way, people can get the basics of the instrument or dive deeper into their instrument. It’s a resource for our community. AMP is uniquely positioned to offer a productive, well-rounded music education, though our connections with the best musicians in the valley, our appeal to young students and families interested in contemporary music styles, and our non-profit status. All AMP instructors have been Live Scanned and cleared to work with children.”