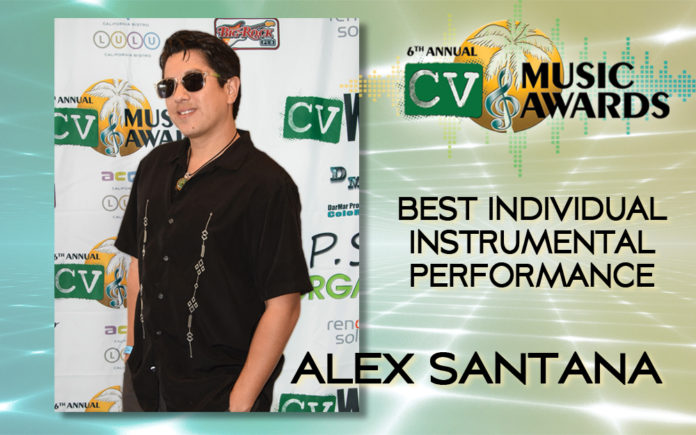 In a community with such superlative musical talent it can be difficult to stand out. When it comes to instrumentalists, there’s one individual who has gained mastery of his instrument, Alex Santana, the 2018 Coachella Valley Music Award recipient for ‘Best Individual Instrumental Performance’. At the time of this interview, Santana was on his way to Europe on a solo trip.   Traveling alone has been said to improve creativity and confidence. You also return with a new perspective and your experiences are more meaningful. Coachella Valley Weekly spoke with Santana as he waited for his flight.

CVW: What does it mean to you to win the ‘Best Individual Instrumental Performance’ award?

SANTANA: “Well, at the risk of sounding ridiculous…it means the world to me. I was first nominated and fortunate enough to win in 2017, since then I can measure the improvement of my quality of life from the venues I now play to the fiscal comfort I now enjoy. I sleep a bit better now knowing I can keep a roof over my head and without a doubt I attribute it to CV Weekly and the folks that supported me behind the scenes.

I’ve had an absolutely amazing and blessed year and I truly believe CV Weekly was the catalyst. I make it a point to remind myself everyday of how incredibly lucky I am to be making a living pursing my passion while so many I know have to work so hard just to get by.

The nomination alone feels rewarding and the recognition is more than appreciated. I sometimes feel, playing day in and day out, I’m never really sure if anyone is paying attention or connecting with what I do. So the recognition is gratifying and reinvigorates my energy to pursue this career. Personally speaking, I at times can feel a lack of inspiration and energy when I begin to feel burned out. This keeps me going and I thank CV Weekly for that.

In addition to the nomination, friends and family actually have to vote in order to win an award. If the nomination wasn’t rewarding enough, it’s compounded by the fact that enough folks took the time to vote, to show their support and love for what I do. It can feel a bit overwhelming when I think about it too much.”

CVW: You’ve won a CVMA before for ‘Best Jazz Instrumentalist’. Some know you from Desert Reggae bands like Irie Junctions and Tribe-O. How do you prepare for and approach each genre from a guitarist’s standpoint?

SANTANA: “Tough question. Honestly, my approach comes from an improvisational aspect. I like to be the icing on the cake if you will. My approach is to blend in best as possible, play fills and leads where appropriate and hopefully enhance the foundation that’s been laid in front of me.”

CVW: You’ve been involved with music since you were very young. You started out playing the saxophone. What led you to the guitar and what guitarist or sound was your earliest influence?

SANTANA: “When I was 11 or so I overheard my older cousin Duney playing the chord progression to Hotel California on his guitar. It did something to me. I found myself entranced with the sound and requested he show me how. I haven’t turned back since. Duney passed away this year in Palm Springs. He will be missed. 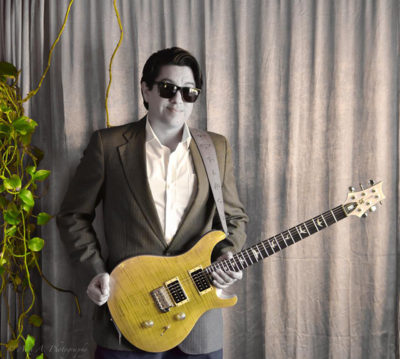 My earliest influences were B.B. King, Carlos Santana and Stevie Ray Vaughan. B.B. for his simplicity and signature tone. B.B. was quoted as saying, ‘Them git pickers love to show you all the notes they can play… but it only matters how you play the one.’ It was an honor and a milestone in my career to have opened for B.B. in 2013.

Carlos Santana, for his infusion of the Latin style on the world scene. The leads, scales and versatility that I learned from Carlos has made me into the guitarist I am today. I feel he has had the biggest influence in my playing. It was said that Jimi Hendrix grew tired and uninspired late in his career and told Carlos he wanted to join his band because he loved what he was doing;  shortly after Jimi passed away.

Stevie Ray Vaughan, for being the ultimate blues guitarist. He absolutely gave it his all anytime he had a guitar in his hand and it encourages me to play with the same conviction. His wife Lenny said that some nights he would toss and turn in his sleep making contorted faces. When she woke him he claimed Jimi Hendrix was showing him secret chords in his dreams. That’s powerful to me.”

CVW: You play many types of music such as Jazz, Blues, Flamenco, Boleros and Reggae. It’s remarkable to me the many hats you wear. Being so well-rounded, where do you go from here as an artist?

SANTANA: “I thank you for that compliment. I’d like to take vocal and guitar lessons. Singing has never come easily or natural to me. I’m inspired by local vocalists and guitarists like Michael Keeth. I feel stagnation is the musician’s worst enemy. It’s essential to keep growing as a musician whether it’s learning new tunes, woodshedding and honestly, maintaining inspiration.

On my nights off I enjoy watching and jamming with local artist I look up to such as Barry Baughn, Brian Nova and Bob Hamilton. I usually leave feeling reinvigorated and inspired.

Aside from the practice aspects, what concerns me most is there’s no retirement plan or 401Ks for musicians. This may or may not be what you were asking but it’s definitely a concern for me and my future. As a musician, one never really knows when we could be out of work. It’s important to have a rainy day fund because in my experience, when it rains, it pours.”

CVW: Can you provide us an update on your solo album?

SANTANA: “Man, that’s a sore spot. I feel it’s a wonderful project with incredible musicians that was started a year ago and has been put on the back burner. I feel like I don’t have the time during season to work on it at all. And when I do have the time I may not feel inspired to do so.

I’ve mentioned inspiration a couple of times now. I feel I’m one of those musicians that doesn’t do a good job of faking it. If I’m not in the mood or more importantly inspired, it’s difficult for me to approach the creative processes. My favorite quote growing up was from Carlos Santana. He said, ‘If you feel it, others will feel it. If you don’t, why in the hell should they?’ I feel I have acquired this motto in my life and in my approach to playing.”

CVW: I’ve seen you perform many a time. You are great on stage. You appear to me to get lost in the music. Can you describe to our readers what is happening to you when you are performing?

SANTANA: “I would refer back to the Carlos Santana quote. What I can say for sure is when I’m performing a lead, I typically have my eyes closed. This allows me to not only focus on my parts but allows me to feel and really commit to what I’m trying to convey while also blocking out anything that is a hinderance to the emotion, like watching people watching me. That makes me nervous and or prevents me from being where I need to be, mentally and emotionally.

I suppose I play for myself first and foremost and if people can get on board with what I’m doing, I consider it a success. People have told me on occasion that I have great stage presence and at times I honestly don’t know what they mean. I think, how can that be if I’m just up there with my eyes closed?”

CVW: You’re currently on your way to explore Europe. Tell us more about how that happened and what your intent is.

SANTANA: “It’s a backpacking trip in hopes of acquiring a sponsor for a musician’s work permit. Hopefully, I’d like to escape the desert heat next summer to perform and live in Europe for a couple of months. I was actually sitting at San Francisco International Airport when you contacted me. I’ll be gone for 30 days or so visiting Amsterdam, Belgium, Germany, Spain and Portugal.

I felt slightly guilty for missing the CVMA’s this year. I was in Bali, Indonesia and had my mother accept the award on my behalf. It was a busy season and felt I needed some time to travel. Next to music, I feel traveling has been the best thing I’ve done in my life. Bono has a lyric in the song “Beautiful Day” where he says, You’ve been all over… and it’s been all over you. I feel there’s some truth to that.

I strongly believe that traveling has contributed to my personal growth as an adolescent and young adult. I feel if every student in this country had the opportunity to travel and immerse themselves in different cultures, we could eradicate racism. And in my life, I’ve never observed the level of racism we’re witnessing today.”

For Alex Santana music is life and life is music. He is a genuine role model for all generations and what every musician should strive for. When he returns from his trip I suggest you go see him perform and shake his hand to thank him for calling the desert his home.

“I just want to Thank Tracy for thinking that I’m worth the time to cover and Patte Purcell for initially nominating me and putting me on the CVMA map. I take notice of those who go out of their way to support me and essentially help keep a roof over my head. I don’t take that for granted.”

Santana is truly reaching for enlightenment and has not forgotten those who have helped him along the way.