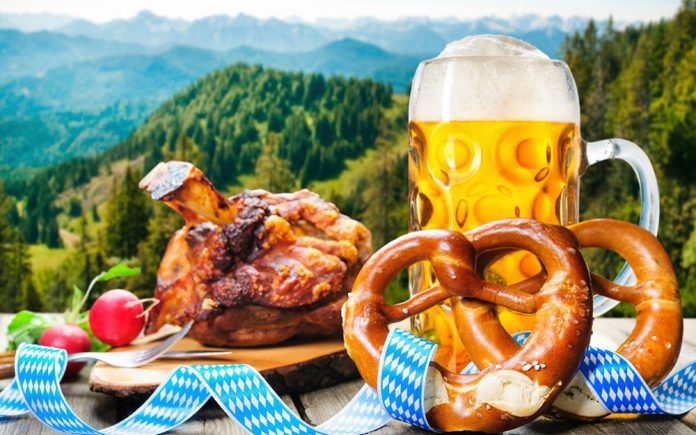 When thinking of the finest European Cuisine, my list begins with Italy & Greece and generally ends with France and Belgium. Shoot me if you’d like, but Ireland, England, and Germany do not usually raise an eyebrow. But, with Oktoberfest coming toward its eventual end, an evening of German dining is just what the good Doctor ordered.

My initial reaction to the name Alps Village was one of initial confusion as The Alps stretch across eight Alpine Countries; France, Switzerland, Monaco, Italy, Liechtenstein, Austria, Germany, and Slovenia. The Swiss and French Alps are legendary and the German stretch isn’t the most widely recognized.

One glance at the menu and the mystery is solved. While German dishes certainly take center stage, the offerings run across European boundaries like a child on a playground.

German Cucumber Salad was a must-try for me as it was a favorite dish of dear ole Dad. He ordered it every time the opportunity presented itself and always concluded with the same observation, “Boy, I sure love cucumbers, but they don’t love me.” The cucumbers and onions were crisp with just enough dill and parsley to make it interesting. Other options across the continent included Mediterranean Olives, a hearty Goulash Soup, Chicken Cabbage Soup, or Garlic Bread. Talk about playing the field!

It was a toss-up between the Oktoberfest Pretzel and the Alps Sausage Platter. “Well, ’tis the Season” I thought, opting for the former for its timeliness. Much of Europe was represented by the other offerings, such as Cheese Fondue, Shrimp Scampi, Cevapcici (Bosnian skinless beef sausages), Fried Calamari, and Irish Bratwurst served up with a Guinness. My Goodness!

After all, this is a beer column, now isn’t it? The choices are solid, well-known offerings. The beer menu reflects much thought about rounding out the portfolio with a broad array of styles in an effort to accommodate as many different palates as possible. All beers noted here is very good representatives of their style and will pair nicely with the broad European culinary offerings.

The draft lineup leads off with Hoffbräuhaus Original, a nicely crisp Helles (light) Lager. The first word that comes to mind with this brew is ‘Crushable’. Next to the HB sits Weihenstephaner Pils and what can one say about a beer from a brewery which will turn 1,000 years old in a scant 19 more orbits? Let’s just agree that they really have this recipe down.

Next in line is Paulaner Weissbier (Hefeweizen), Germany’s number one wheat beer and a fan favorite around the globe. It’s the perfect accoutrement to that Shrimp Scampi we discussed earlier and please note that most German’s frown upon the lemon clinging precariously to the lip of your beer glass. The lone American Beer on the tap list is Mission Brewery’s IPA…made deep in the heart of downtown San Diego. Fun fact: Mission Brewery’s 25,000 square foot palace was the Historic Wonder Bread Building in the East Village of San Diego. 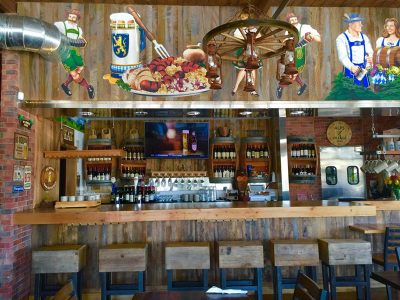 Rounding out the taps is Köstritzer Schwarzbeir (Black Beer). This little gem was re-introduced as a subsidiary of Bitburger, Germany’s largest beer producer. Should you want to sound like an expert whist ordering it, note that Schwarzbeir does not contain the letter ‘T’ between the r and the z. If you don’t say ‘schwartz’, you will receive many silent nods of approval from the staff and German beer aficionados as well. Last but certainly not least is Erdinger Dunkel, quite possibly my favorite of the draft offerings. The Carmel notes up front are nicely contracted by the generous use of first-class Hallertau hops and I simply cannot recommend this strongly enough.

The package beer list contains a whole bunch of diversity and one killer surprise. It is comprised of Bitburger Drive (non-alcoholic German lager), as well as Blanche de Bruxelles; a wonderful little Belgian Witbier from Brewery Lafevre, an independent, family-run brewery since 1876. Currently at the helm are generations numbers five and six. Next in line is Omission Lager, one of the very best gluten-reduced beers from the brothers of Curt and Rob Widmer…another family affair.

Bember With Care is a German Apfelwein (Apple Wine), which is one of the coolest ways to pronounce Cider that I’ve ever heard. Rounding out the package list is Offshoot Relax [it’s just a hazy IPA] from our friends at The Bruery in Placentia. At least, I thought that was the end of the list until I spotted…IT. This beer is tough enough to find in specialty beer and wine shops, let alone in a strip mall in Palm Desert! The award for the best find in a small restaurant goes to…Weihenstephaner Korbinian. This Dopplebock (Double Bock) is dark enough to absorb light and is capped with a rich, tan-colored collar of foam. Hints of figs and plums dance in your head while visions of nutty toffee and chocolate roll unabashedly around your tongue.

At this point, listing the myriad of specialties available at Alps Village would be pointless as every eclectic item on the menu sound better than the dish which preceded it. I will admit to ordering the Jägerschnitzel Pork with spätzle and its accompanying rich mushroom brown gravy to go as I was already full from my Starter and Appetizer.

The drive to Alps Village is simply worth it just for the Korbinian…and the rest of the menu is simply icing on the Apfelstrudel.

(When Ed Heethuis isn’t brewing at Spotlight 29 Casino for 29 Brews, you will find the Certified Cicerone / Brewmaster out on his road bike, waterskiing the Rhine River between Koln & Dusseldorf, or talking beer with the patrons at Taproom 29. He may be reached at: heethuis.ed@gmail.com or wherever beer may be found in the wild.)