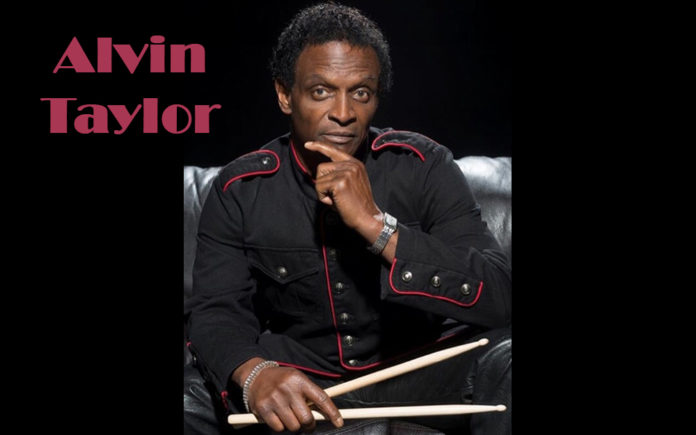 I just had the most amazing 2 hour interview that I’ve ever had with a born and raised Palm Springs resident who has reached the pinnacle of success. His name is Alvin Taylor and he is undoubtedly one of the top if not ‘The Top’ drummer in the world. He was recently recognized with his own star on the Palm Springs Walk of Stars. Mayor Robert Moon and Bob Alexander (Walk of Stars) stated that in 27 years it was the largest crowd they had ever seen attend a Walk of Star event. Even though there were far bigger stars, Taylor still had the biggest crowd ever!

I was first introduced to Alvin at our Smooth Jazzfest by Producer Ronnie King another local icon. Little did I know just who this kind, humble man is. I’ve been planning to do a story on him for some time but after my interview all I can say is, one column is not enough.

Guess who ‘discovered’ him?  When Alvin was 14 years old and a busboy at the Biltmore Hotel in Palm Springs there was a band called The Soul Patrol. Their drummer was a heavy drinker and Taylor volunteered to take his place after he got incapacitated. Of course they didn’t expect much until he sat down. Once he started they were blown away. They asked him to rehearse with the band. One night (after bussing his tables) he sat in after the drummer became inebriated and guess who walked in? None other than the Rat Pack’s Frank Sinatra, Sammy Davis Jr., along with Billy Preston and Little Richard. Little Richard walked up to him and said “I’m Little Richard and I’m the King of Rock and Roll and I want you to play in my band.” A few weeks later he was in Las Vegas opening for Elvis Presley with Billy Preston and Jimi Hendrix on guitar. Not only did he play the drums he also conducted the 18 piece orchestra for the band. Let this sink in….he was 14 years old! This is how he started his career!

Today he is a legendary drummer, Musical Director, and Producer with 78 gold records, 48 platinum records and 18 diamond records. He’s an overwhelming success. He still does many studio gigs, turning down more than he takes. He also has ATM Productions, which is an artist development company. They take talent and show them the ropes. As he explained getting one great song recorded and then putting it into the hands of the right people, like Clive Davis (Whitney Houston, Santana, Sly and the Family Stone, Barry Manilow, Sony Music) can be the ticket to the stars. 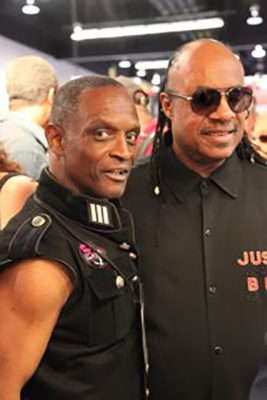 Taylor’s experience in the business and his plethora of contacts makes this opportunity a once in a lifetime opportunity. Taylor’s states it like this “If I say I want to do something I do it. It’s going to happen.” Here’s a list of a few of the artists that Alvin Taylor has performed and recorded with legendary artists including George Harrison, Elton John, Tina Turner, Bob Dylan, Bob Welch, Stevie Wonder, Natalie Cole, Gil Scott Heron, Diana Ross, Barry White, Sly Stone, Leo Sayer, Bill Withers, Andre’ Crouch, Ike and Tina Turner, Ronnie Wood (guitarist with the Rolling Stones), and so many others.

The story of how he met and married his wife of 7 years is one of those classic ‘it’s going to happen’ moments. When Alvin was 8 years old he met Delia Ruiz and told her “you better marry me or I’m going to beat you up.” Of course that scared her and she ran. Over the years Alvin went to LA and made himself a star, she followed up on him through his sister. He attended and played for the PS Flashback, which is a group of former students who got together and guess who was there? She was! They reconnected and he moved back to Palm Springs to be with her after talking with her over a year. Isn’t that romantic? He told her “I’m going to do some incredible things,” and he has and continues to do so.

One of his goals is to make Palm Springs the entertainment capital of the world. What an amazing guy! When I asked him what his favorite genre was he told me “I’m known for rock, but my love is jazz.”

There are so many incredible stories about his career that I am going to do another column next week including his stay with George Harrison in his castle outside of London where they recorded . These are the kind of stories that fascinate me because I love the ‘behind the scenes’ stories. What was it like living in his castle and recording the ’33 & 1/3′ album? What was he like? The stories are incredible.

Alvin Taylor will be performing with Keisha D at the Copa on May 11. To find out more about him visit his Facebook page at Alvin Taylor Music.