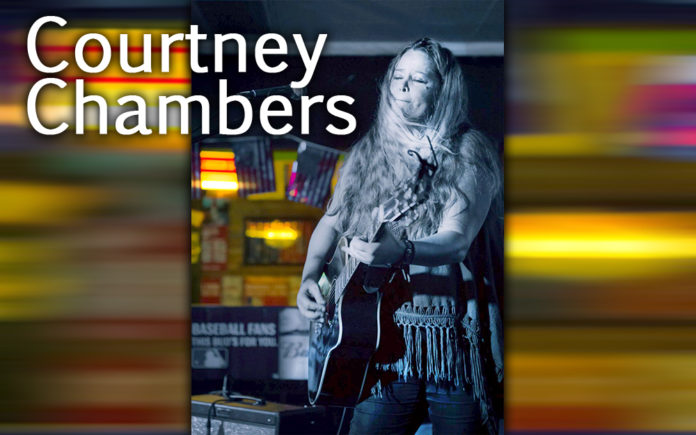 Courtney Chambers is one of the most talented and beloved singer-songwriters in the Coachella Valley. She performs regularly at many venues here in town as well as out of town gigs and is a true working musician foregoing a ‘day job’ and has been able to support herself as a performing musician for quite some time. She has also put out several albums including: IMPERFECT LIKE ME (2001), HIGHER PLACES (2004), BIGGER AND BRIGHTER (2007), TALES OF THE AFTERMATH (2015), and COURTNEY CHAMBERS (LIVE) (2017).

She has been nominated for CV Music Awards over the last couple years and has shared the stage with Belinda Carlisle, one of her music idols. If you’ve heard Chambers sing then you know why everybody loves her. If you haven’t, then make it appoint to check her out. Chambers has both power and vulnerability in her vocals, which makes her performances riveting to say the least, not to mention she’s got mad guitar skills.

She took time out of her busy schedule to answer a few questions for us.

Chambers: “Yes, I’m writing and just starting the recording process for a new studio record to be released in 2019, I’m collaborating with my longtime producer Sean Hoffman.”

CVW: You are a true working musician meaning you don’t do a ‘day job’. How long have you been able to support yourself as a musician?

Chambers: “I was able to go full time as a musician right after I turned 30.  It was a top goal for many years and was very satisfying to finally achieve that.”

CVW: When did you realize that this was it for you?

Chambers: “I’ve known music was for me since I was 5.  I loved to sing and make up songs very early on and told my dad that I was supposed to do music when I grew up.  I was blessed that he nurtured and encouraged that desire.”

CVW: Tell us about some of your recent shows that are standouts for you like the Belinda Carlisle show?

Chambers: “Oh yeah, performing with Belinda Carlisle is like coming full circle for me being she was such a huge influence on me growing up.  We performed her new stuff and got to do some of the old Go-Go’s stuff as well as a couple of her early hit solo songs.  I remember being in rehearsals singing and playing guitar with her and thinking to myself ‘I’m singing and playing songs I grew up on with one of my heroines, this is amazing!’ It was such a feeling of family with her and the band too which was so cool.

Another standout show was performing at Desert Oasis back in October with Armando Flores and Rob Peterson backing me up.  That was an amazing experience.”

CVW: You also perform in a Heart cover band. Tell us about the difference you feel doing that opposed to performing your original material?

Chambers: “I used to be in Dog N Butterfly and have subbed in Heart 2 Heart.  I love playing that music and was certainly a challenge for me to learn to play it.  It has grown me as a guitarist and as a musician.  I guess the difference I feel between the two is that with my music, I’m not imitating someone else…you know, I’m Courtney Chambers, not Nancy Wilson.” (laughing)

Chambers: “When the muse comes, I follow.  And it strikes at interesting times. (laughing)  But generally, I start with a chord progression and sort of sing in tongues until my thoughts start to form.  I haven’t co-written songs very much, but recently have been collaborating with Lance Riebsomer, which has been pretty great.”

Chambers: “There are quite a few songs I feel very proud of and passionate about, but if I had to name just one, I would say “I’m Ready To Go Now” from my 3rd album BIGGER AND BRIGHTER.  That song still reduces me to tears sometimes.”

CVW:  What are your favorite venues to play?

Chambers: “The moment I realized I needed to stop waiting for someone to ‘discover me’ I had already discovered myself.”

Chambers: “For myself, I feel being able to pay your bills and make a living doing your art is success.  But then, there’s also the importance of evolving, challenging yourself and getting to your next level professionally and creatively.”

Chambers: “That is a LONG list! But at the core I would say Sarah McLachlan, Smashing Pumpkins, really, 90s music has been very influential in my music.  Vocally I grew up on artists like Pat Benatar, Belinda Carlisle, Aretha Franklin and Whitney Houston.”

Chambers: “Eevan Tre.  BUT, we are already in talks about doing something together, so I’m excited about that.”

Chambers: “Hmmmmmmm….that is tough. So many… Sheryl Crow comes to mind.”

Chambers: “There are quite a few people that I have mad respect for in this business, I would have to say Esjay Jones is at the top of that list.  She has such an amazing work ethic; I take a page out of her book often.  She has been quite an inspiration for me and watching her pushes me to be better.” 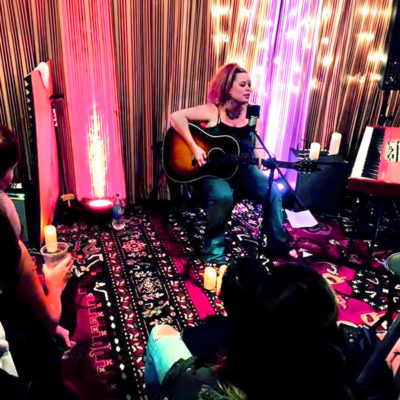 CVW: You perform out of town a lot. How is performing here in the desert different from other places?

Chambers: “I definitely feel the support of the community here in the desert more so than anywhere I’ve performed.”

CVW: Do you prefer playing with your band over performing solo?

Chambers: “Totally prefer playing with my band.  I love the comradery and hearing the music come to life in another way.”

CVW: Who are your current band members?

Chambers: “Armando Flores on Bass, Calvin Williams on Guitar and currently auditioning for a Drummer.”

Chambers: “To work with and write for bigger artists and focus more on the songwriting aspect of my career.  Continue playing and collaborating with great performers.  I’ll continue to put out more records until the wheels fall off.  I would love to tour Europe and the US as well. I am truly grateful for the opportunities afforded me, and like anything you aspire to be, it takes dedication, sacrifice and hard work.”