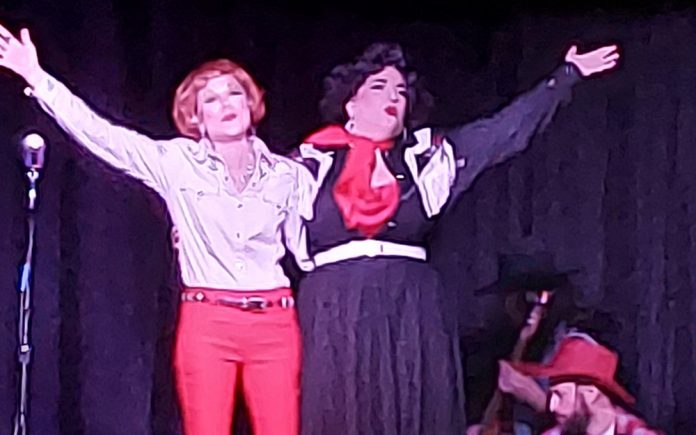 On March 5, 1963, 90 miles from Nashville, in a forest outside of Camden Tennessee, her recovered wristwatch had stopped at 6:20pm. The wreckage of the crash was not discovered until the following morning after heavy, cold winds had forced the plane into a nose dive. A forensic investigation revealed that everyone on board had died instantly.   Few legends have had more of an impact than singer Patsy Cline, did in just 30 short years of life.  Her songs were the first to make cross-overs from the Country to the Pop charts.  Her music made her immortal. 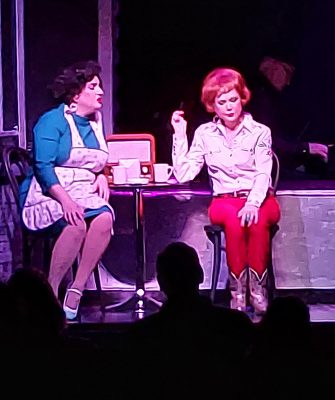 Currently in production on the Desert Theatreworks stage in Indio, is a sweet and compelling tribute to the legendary singer, Ted Swindley’s 1988 hit musical, Always…Patsy Cline. The musical is based on a true story about a friendship between Patsy Cline and an ardent fan she met while performing in Houston, Texas.  The show features many of Cline’s hit songs, “Walking After Midnight,” “Crazy,” “I Fall to Pieces,” “She’s Got You,” and “If You’ve Got Leavin’ On Your Mind.”  Regardless of personal taste, who does not love the music of Patsy Cline?

Always… Patsy Cline, tells the story of Texas native, Louise Seger, (Yo Younger,) who in 1961 gathered up a group of friends and headed for a big venue Texas honky-tonk to watch a show headlining her favorite singer, Miss Patsy Cline, (Kelly McDaniel.)  Seger, had been a fan of Cline’s since she had first appeared on a national show in 1956, called the Arthur Godfrey Talent Scouts.  Upon meeting Patsy in person, the two immediately connected and established a friendship that lasted until the singer’s death in 1963.

Yo Younger, as the easy going, fast-talking, warm-hearted Louise Seger, is insanely loveable in her portrayal of this high-spirited fan. Younger’s fun, beer drinking, characterization of Louise, dances and swaggers across the stage as if she owns it (and she does!)  Her telling of the story is so engaging that you will feel as if you’re eves dropping on a very personal experience and are right there in Louise’s kitchen, swapping life stories deep into the night when a new friendship developed over bacon, eggs and a mutual kinship.

Kelly McDaniel, is the legendary Patsy Cline and her performances of Cline’s songs had me utterly mesmerized.  McDaniel, has unparalleled vocals and was absolutely stunning in her cover of Cline’s most famous songs.  If I had not known it was a live show, I could have easily believed that her voice was dubbed with original recordings. The angst and pain of Patsy Cline, is so perfectly captured in McDaniel’s portrayal. 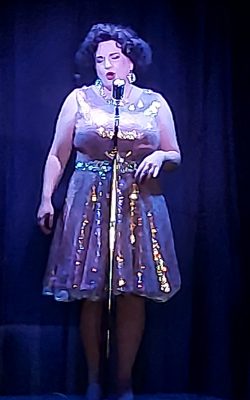 Bravo to both of these women, who put on a show that dares you not to fall in love with Patsy Cline and Louise Seger.  Michael Pacas, directs this production of the hit musical.  Balancing a large stage with only two performers takes a special skill and Pacas proves that he’s not only a very talented actor, but knows how to expertly stage a script.

The only serious thing missing from this production is an inspiring set design that would have contributed greatly to the intimacy of the story.  What appeared to be a minimalist design can work well with some scripts, but not this one. This story calls for much more of a warm, homey, kitchen, that would have wrapped around this late-night girl-talk like a warm blanket.  And the lone dark table in the honkey-tonk, did not allow my imagination to visit Texas.

Wonderful live music provided by Douglas C. Wilson, (Conductor/Pianist,) Marypaz Holguin, (Bass,) Sean Poe, (Drums) and Jannine Manthey, (Fiddle,) gave a real down-home feel to this show. Rebecca McWilliams’, Patsy Cline, costumes were gorgeous and no doubt would have been appreciated by the legend herself.

Desert Theatreworks production of Always…Patsy Cline, showcases performances that are so engaging, a script that is so entertaining, music that is so timeless and stage direction so compelling, that you will be kicking yourself if you miss this show.

Always…Patsy Cline is running through February 6, 2022, and is highly recommended for audiences of all ages.