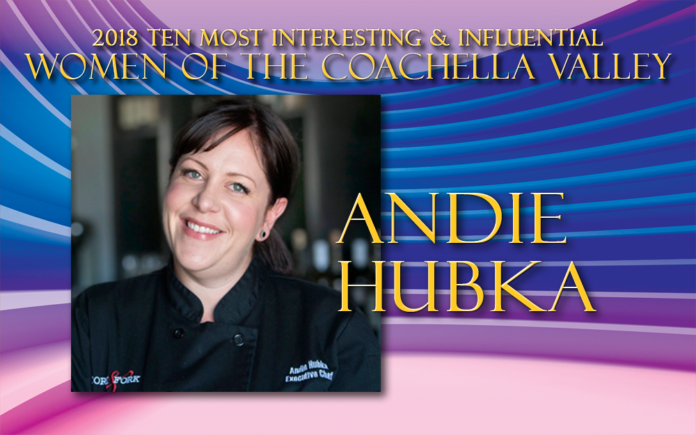 Originally from Los Angeles, specifically near the beach in Playa Del Rey, Andie Hubka spent most of her childhood visiting the Coachella Valley as her grandparents moved to Rancho Mirage when she was born. Because of this, she considers herself a local and has lived here full time since 2002 after she attended culinary school in Los Angeles, receiving both her culinary degree and a bachelor’s degree in culinary management through the Art Institute of Los Angeles.

Andie’s career path was always clear to her, as she started cooking at a very young age. She had a few cookbooks she used regularly, one of them being The Joy of Cooking. She would plan out and shop for recipes and then cook for her family. When she went away to college, she would cook for her friends in her tiny apartment kitchen and subsequently became more interested in throwing dinner parties than in her schoolwork. After the first year, she dropped out of school and enrolled in culinary school, a move she considers the best decision she ever made. 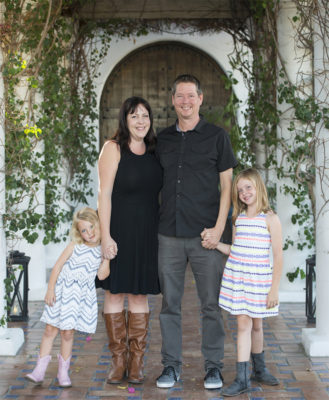 During her 5 years of culinary schooling, she started to pick up catering jobs and worked at various restaurants as a server learning about the front of the house duties. She worked every job in the fine dining restaurant at her school, learning about all aspects of running a restaurant. By the time she graduated, she had come to realize she didn’t want to go to work for someone else. She and her husband, whom she met when she was only 14-years old, brought their catering business to the desert. The first job she landed was a funeral, which got her another gig, which kept growing and growing her business.

For the next few years, they catered here during the high season. Andie also took a job as a corporate trainer for a very well-known restaurant franchise to help pay the bills in the summer months, which introduced her to teaching adults, which she loved. She started offering in-home cooking classes to her clients, which was the seed that started her idea to open a cooking school. In 2008, Hubka opened Cooking with Class in La Quinta, which was the desert’s first recreational cooking school. 2008 was a particularly hard time to open any business, but they survived the economic crisis and developed a loyal following of students. Early on, on Wednesday nights they would open up the cooking school and serve a prix fixe 5-course dinner with wine pairings, calling it “Cork & Fork”. After the third year, word got around and they’d have to turn more people away than they could seat. In January 2013, they opened the official Cork & Fork in the space next door, offering sharable small plates and unique dishes that utilize local and organic produce.

During the past five years, they have grown the restaurant to become one of the top in the Coachella Valley, with a wonderful reputation they are very proud of. The cooking school has grown to incorporate award-winning wine dinners, private events, and catering. The Hubkas recently opened their second restaurant in Indio, Heirloom Craft Kitchen, which serves casual farm to table food, including a vegan and gluten-free menu with a great beer and wine list.

The most rewarding aspect of her career, Hubka says, is being able to give her time to some of her favorite local charity organizations, including the FIND Food Bank. “People love to eat and drink, and I have been able to turn that commodity into a way to raise money for them, which makes me very happy. I also really love teaching cooking classes, it’s so cool to get feedback from people all the time that they have increased their confidence in the kitchen after taking my classes.”

Hubka and her husband travel quite a bit and in their adventures they take bits and pieces of their dining experiences and bring them to their menus. She likes to stay on top of the culinary trends and incorporate them in their menus. She’s inspired by what chefs are doing these days and the return to using local, sustainable products and highlighting what’s in season. 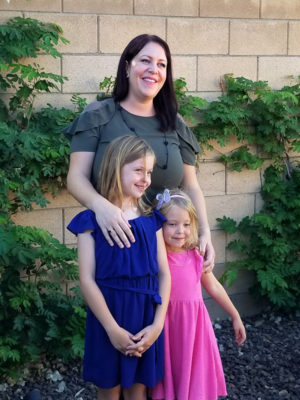 Andie and her husband got married 12 years ago and have 2 daughters, Lily, 8, and Riley, 5. She names her children as the light of her life and loves to spend whatever free time she has with her family. She has a hard time finding a good balance, as she is a self-proclaimed workaholic. But her husband helps to keep her grounded and her kids remind her what’s really important. Hiking is her favorite way to clear her head, and she considers herself lucky to have some of the best hiking in the world here in the valley eight months of the year. Besides hiking and travel, wine is her number one passion. She is an avid student and collector of wine and loves to try new things and travel to wine regions and learn all about them. She lists Hawaii as her number one vacation spot, but also loves to visit Oregon wine country and Mammoth in the summertime. Her mantra in life is “Choose joy.”

Interestingly, Andie was on the path to become an attorney before she decided to drop out of school and go to culinary school instead. To this day, she still thinks she would have been a great lawyer! She claims most people assume that she is very confident and tough, but, “I’m basically a bundle of nerves all the time. I am trying to embrace it and realize that anything worth doing should make you a little nervous.”

If you haven’t tried Andie’s cooking, her awards and accolades speak for themselves. In 2010, she was name best chef in the valley by Palm Springs Life. Since 2013, she has won the following awards every year: Wine Spectator Award of Excellence, TripAdvisor Award of excellence, Yelp Diners’ Choice, and Opentable Award of Excellence.

Andie will be representing the FIND Food Bank, a great organization that has an incredible reach – for every $1 donated, they are able to provide 7 meals. Says Andie, “There are so many food insecure families and children here in our community. It’s a phenomenal organization and I am so proud to work with them to help feed kids in our community who aren’t as lucky as my kids are.”