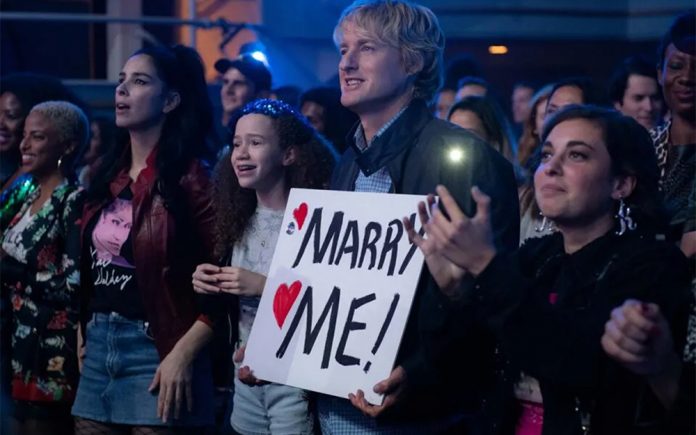 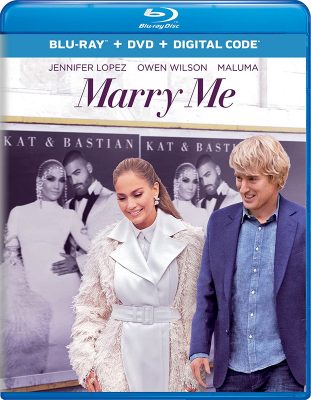 Jennifer Lopez plays a heartbroken pop star in the somewhat contrived and derivative plot who is set to marry her pop star fiancé (Maluma) on stage but instead marries a stranger from the audience – a high school math teacher (Owen Wilson).  Against all odds, their unlikely relationship develops into something real.  But can it survive the limelight?

Is Jennifer Lopez the reigning queen of romcoms?    Maybe not for all tastes, but for her considerable fane base, this latest outing has already earned an astonishing 92% audience score on Rotten Tomatoes.  Owen Wilson costars and the original music is by Lopez and Latin music megastar Maluna.

The home video disc includes never-before-seen bonus content including eight deleted scenes (‘Plotting the Future,’ ‘Is Everyone Happy?’ ‘Come to the Concert,’ What Am I Doing Here?’ ‘You’re Married,’ Having Fun at the Dance,’ and ‘Flight Status.’). There’s a fun gag reel and a look behind the scenes with actress/producer Lopez.’  Generous bonus material includes these watchable featurettes:

JENNIFER UNVEILED ~ using raw, of the moment, b-roll shot on set throughout the production, this piece gives the audience unprecedented access behind the scenes, showcasing close-up, intimate footage of actress producer Lopez.

BEHIND THE CAMERA: THE MAKING OF ‘MARRY ME’ ~ Glitz glamor, romance and music.  Go behind the scenes in this making-of for an up-close at how powerhouse performer Lopez and all-star director Coiro team up to put swoon back on the big screen.

TURN IT UP: THE MUSIC OF ‘ MARRY ME’ ~ We go inside the process with both J.Lo and Maluna and discover what they wanted these songs to achieve, the stories and meanings behind them, and how they collaborated though countries apart.

LIVE AT MADISON SQUARE GARDEN ~ To create a fictional, epic, moment between Kat Valdez and Bastian, the production pulled off a massive real-world audience of Maluna’s, Jennifer Lopez joined him onstage for one of the film’s most powerful numbers.  We go backstage and see how they pulled off such n exciting surprise, we also get a close look at global pop star Maluna.

MARRIED WITH STYLE ~ Complete with eye-popping musical numbers, the nuptials of Kat and Bastian was meant to bring the house down IN STYLE!  We visit the Hammerstein Ballroom in New York City as the tam behind this magical moment that could have been, breaks it down for us.

“ON MY WAY” Lyric Video.

What are you watching these days?  Drop me a line, I want to har from you.