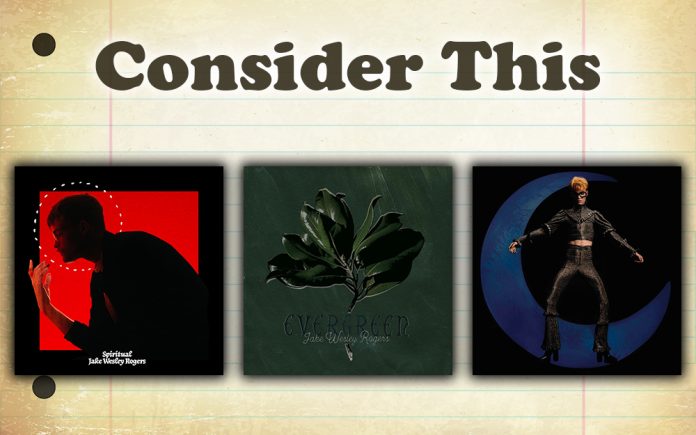 A few weeks ago, I was shutting off the TV, just as Good Morning America was introducing a musical guest, Jake Wesley Rogers. They said that Elton John has stated this kid reminded him of a younger version of himself. Cynical Bitch Goddess that I am, I rolled my eyes skeptically and sat down, fully prepared to be irritated. Instead, I was kind of blown away.

Turns out, Jake has packed a lot of living into his first 2 ½ decades. The Ozark, Missouri native displayed an affinity for music at an early age. He began playing guitar the same year he started grammar school. By age 12 he had learned piano, received formal voice training and performed in local theatrical productions. That same year he made it to the quarter finals of NBC’s America’s Got Talent. He had also recently come out as gay to his family.

Following high school Jake relocated to Nashville to study songwriting at Belmont College. Rather quickly he began recording and self-releasing his own EPs. His first, the four-song Evergreen EP, arrived in 2017. It featured the Gothic-Gospel gumbo of “Love You Like No Other,” the clangorous quest for spiritual salvation, “Sanctuary,” as well as the insistent and infectious heartbreaker, “You Should Know.” But it was the title track that showed the most promise.

As plaintive piano notes connect with pastoral strings, the opening couplet indicates that Jake has fully crossed the threshold from boyhood to manhood; “Why do I know you? Felt like I should hold you, you’ve been fucking with my mind since I laid eyes on you.” Shifting from unrequited longing to reciprocated love, the stakes are raised; “Spent a lot of my time thinking I was high tide, then I went and let you in to reel my bones back in.” As the arrangement gathers speed, the song becomes a full-fledged evocation. On the Spiritual EP, released in 2019, Jake connects the dots between ethereal exaltation and carnal concupiscence. The five-song set is bookended by “Jacob From The Bible” and “Holy Man.” The former opens with whooshy keys and yearning vocals. Lyrics directly address his mother, seeking absolution for living his authentic life; “Mama, forgive me, I grew up to fast, but it’s not on you, it’s in the past.” By the chorus, stacked vocals explode across a Tsunami of synths and a kick-drum beat. Displaying as much courage, faith and bravery as his scriptural counterpart, Jake bares his soul, “My first lover shared my name, my holy secrets enabled Cain/I thought I loved him, maybe I did, but I was so young then, could’ve called me a kid.” As the arrangement achieves lift-off it shares some of the celestial heft of The Beatles’ “Let It Be,” before powering down to a wordless vocal and piano coda.

The latter is as stripped-down and bare-bones as “Jacob…” is rococo and ornate. The instrumentation is pared down to phased and shuddery electric piano, and the spotlight is squarely on Jake’s pliant tenor. A tender torch song, the lyrics speak to the ecclesiastic joy of first love; “He gives me his hand, I feel like it’s God’s, I’m younger again, turns devils to doves, when I’m with him, I am falling, I am falling in love…I’m not a holy man, I’m just doing the best that I can.” As his vocals spiral and trill across the instrumentation, it feels as though he’s channeling the late, great Donny Hathaway.

The three remaining songs add some new colors to Jake’s sonic palette “Little Queen” is propelled by supple Hammond B3 colors, chugging bass lines and a bloopy beat. Jake’s naivete is on full display as lyrics take a duplicitous lover to task; “I believe you when you lie to me, you should know that by now, you weave your words inside of me and I wear them inside out.”

Meanwhile “The Pretender” is an aching piano ballad that paints a vivid portrait of an early sexual experience that he mistook for love; “Lightning storm on my sweet sixteen, I locked my door, told him my teenage dreams, and we embraced like the sand and the sea, I handed over contraband parts of me.”

Finally, “Man On The Moon” could easily find a home on Country radio (if only their rigid playlists didn’t preclude same-sex relationships and embraced lyrics that actively search for Mr. Right). As strummy acoustic guitars partner with plangent piano, thrumming bass and a brushed, shuffle rhythm, he candidly confesses; “I broke his heart, Lord, and I think he broke mine too, like a canyon, with a river running through, washing over me, finally clean, Lady, I can’t love you, I’m still looking for the man on the moon.”

Although his original inspirations were vocal powerhouses like Nelly Furtado, Lady Gaga and later Adele, by the time of the release of last October’s Pluto EP, it was clear that Jake had taken a deep dive into ‘70s music, soaking up progenitors like Elton John, David Bowie and Freddie Mercury. Take the opening cut, “Weddings And Funerals,” although it opens all up-close and personal; just quiescent piano and Jake’s best saloon singer ache, it quickly shapeshifts into a grandiloquent overture. Lyrics count off life’s milestones over a tick-tock beat; “My parents got hitched back in ’86, like they invented love on a summer solstice, my grandfather died from missing his wife, when he invented death I couldn’t make myself cry.” By turns, deeply personal, sanguine and vulnerable he confesses “I don’t wanna to die, at least not tonight, cuz I got shit to do and it wouldn’t be polite.”

“Middle Of Love” is positively Abba-esque, as a pounding piano and shuddery guitars wrap around a tumbling, akimbo beat. It’s also the perfect showcase for Jake’s melismatic croon as he charts the ups and downs of a tempestuous romance; “We made up and made out in a swimming pool, sometimes life is just like high school, fight like adults make love like it’s taboo, and I really fuckin’ hated high school.” The rollicking arrangement builds to cathartic crescendo before stopping on a dime.

Three songs speak to the trials, tribulations, and triumphs of Gay 21st century living. The breezy “Under The Sun” is powered by springy guitars, sprightly piano and sylvan strings. Lyrics manage to stitch a throughline from biblical times to the Salem witch trials to a sly reference to the languid homoeroticism of the film Call Me By Your Name. They illustrate that same-sex love isn’t some new-fangled invention; “Swear to God these feelings are ancient, swear to God it ain’t nothing new, swear to God there were boys in the basement on Noah’s Ark in the dark, under the blue.”

“Cause Of A Scene” unspools like a casual conversation but ends up splitting the difference between a confessional cri de Coeur and an amorous mash note. The insistent, piano-driven melody cushions Jake’s elastic tenor and ethereal backing vocals. For most of the 20th century, being gay meant a subterranean existence that relied on furtive glances and coded language. That subterfuge has mostly receded, but the lyrics note that there are still moments in life when we’re required to camouflage our most authentic selves; “My mom and dad adore you, you’re better than the last one I called mine…haven’t told my grandpa ‘bout you, cause my parents told me not to, it might be too much at the end of his life, but the two of you share the same name, oh, Charles I wish you could meet, but I don’t wanna don’t wanna, don’t wanna, don’t wanna, no I don’t wanna, don’t wanna don’t wanna, don’t wanna be the cause of a scene.”

Finally, there’s a yin yang magnificence to the two latest singles. “Lavender Forever” simply bursts out of the speakers, a Glam-tastic stomp anchored by lickity-split piano, tensile bass lines and a walloping beat. 100 years ago, the word “Lavender” was a sneering euphemism that labelled a man as effeminate. But Jake takes that pejorative signifier and flips the script, proclaiming himself not just lavender, but “Lavender forever,” managing to create a kinetic Gay anthem that eclipses Queer chestnuts like “Glad To Be Gay” by Tom Robinson and “You Make Me Feel (Mighty Real)” from Sylvester.

Conversely, “Dark Bird” is brooding and ambitious, landing somewhere between Prog Rock and Disco. Dense lyrics like “Get your colors from the thrift store, trade your halo for a pitchfork, all good martyrs get the last word, I got the last word like a dark bird,” essentially give us permission to let our freak-flags fly. A heady message to any smalltown kid feeling marginalized and alone.

There’s an authenticity and intensity to Jake’s music that recalls antecedents like Rufus Wainwright and the late, great Jeff Buckley. The most exciting thing is that these EPs represent his first baby steps. There’s a grace and gravitas to this kid that belies his age, and an exuberance that is infectious. The best part is he’s just getting started.