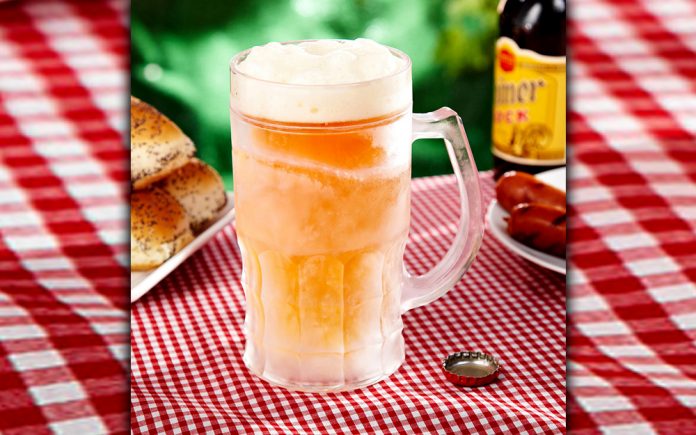 Reaching into the refrigerator for a leftover slice of pizza is commonplace in America and hardly a soul among us would consider the act unfamiliar territory. There are two ways to eat this slice; one is cold, straight out of the box and the other is to warm it gently to a more pleasurable temperature.

Most are aware that the cold slice will have muted flavors, many of which will resemble the cardboard container from which it came. Warming the piece will begin to melt the cheese and begin to make the flavors of the sauce and ingredients begin to pop. Most would argue that the warmed pizza is better in almost every instance.

Beer behaves exactly the same way. As a beer warms, flavors begin to change and become much more dramatic. Yes, I understand that you don’t wish to consume your American Lager at room temperature, but stick with me on this…I’m going somewhere with it…I promise.

Beer is separated into two broad categories, Lager and Ales. This almost perfectly mirrors the split between wine styles into White and Red. Most are familiar with serving white wines chilled and red wine much warmer and the same goes for beer.

Lagers are the whites of the beer world and thrive when served somewhere between chilled and downright cold. Their nuanced and balanced flavors become refreshing when served cold and there is nothing to be ashamed about enjoying these beers in that manner. Truth is, beer generally tastes best when served 10-15° below their fermentation temperature, which is generally around 48° Fahrenheit for Lagers. That makes the serving temperature range of 35-40° totally acceptable. This approach becomes unacceptable when the use of a frozen mug or glass is introduced; something we will discuss that at length later.

Ales, like their red wine brethren, are much more about a ‘Sip and Savor’ experience. Flavor ranges tend to be bold instead of soft and most of the beers in this category change flavor and gain complexity as they begin to warm. Since most Ales are fermented around 68°, they can be served starting around 50°, although this certainly isn’t the norm. Since most bars and restaurants keep all of their kegs in the same cooler, they must use a one-size-fits-all approach. Besides, it doesn’t take long for a beer to begin warming up once in a glass…unless that glass is of the dreaded frozen variety.

Why all the dislike for frozen glassware? The big freeze causes many different problems, so let’s begin to lay them out. First, when 35° beer meets something colder, it begins to immediately release copious amounts of CO² in the form of foam. Pouring beer onto that initial burst of foam only creates one thing…more foam. We’ve all seen that poor bartender continue to fill an already full glass in an attempt to eliminate the 50% of foam on the top of the glass and while you might see foam going down the drain, I see nickels, dimes, and even quarters. 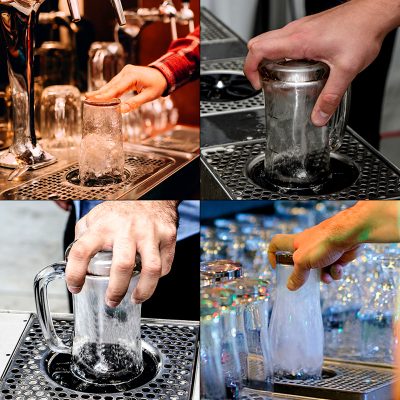 The second reason frozen glasses are a bad idea is that most establishments move their glasses directly from the dishwasher to the freezer without allowing them to properly dry. Our good friends in charge of public health insist that the last thing to hit those glasses in the cleaning cycle is sanitized water and I’m certainly not going to debate dictations from the Health Department. Putting these glasses directly into the freezer causes the leftover sanitized water to pool in the bottom of the glass and then freezes it solid. This results in a sanitizer iceberg floating to the top of the glass a minute or two after serving. The melting ice doesn’t taste good and will impart a chlorine-like aroma to your beer.

The best beer establishments employ the use of a Belgian Glass Rinser. This apparatus is used prior to filling the glass and provides several benefits. First, the spritz of water eliminates any dust or sanitizer which may have accumulated inside the glass. Second, the water lubricates the inside of the glass, thus ensuring a better, less-foamy pour. Lastly, the cold water rinse chills the inside walls of the glass, again, resulting in a smoother pour.

So, the next time a bartender tries to serve craft beer in a frosted mug, send that glass back with a respectful salute. Goodbye, Frosty. It’s time for some decent beer.

(When Ed Heethuis isn’t brewing at at local Casino, you will find the Certified Cicerone / Brewmaster out on his road bike trying to rebuild a balky old knee or talking beer with the patrons at Taproom 29. He may be reached at: heethuis.ed@gmail.com or wherever beer may be found in the wild.)