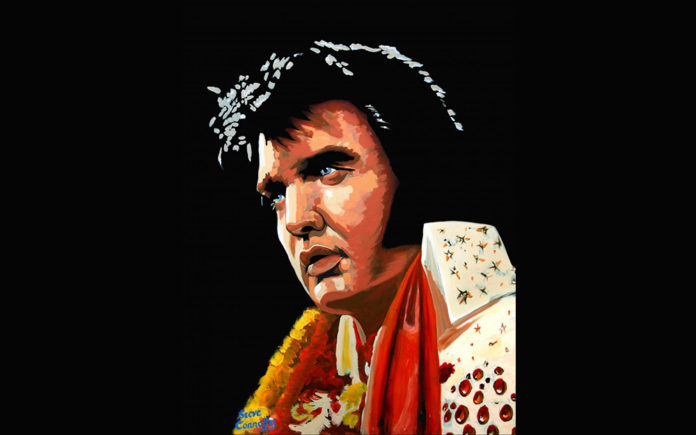 Summer is far from slow here in the greater Palm Springs area with a whirlwind of events & openings to attend! Steve Connolly (“Spirit of the King”), is an amazing singer, performer, and artist, and will be one of the featured artists in REBECCA FINE ART GALLERY for the 3-Month Exhibit “Summer Group Show” which opened on July 8 and runs through September 30, 2017.

So how does a guy with a business restoring art and painting church ceilings become one of the most electrifying entertainers in Las Vegas and the most sought-after and accomplished Elvis stylist perhaps in the country? Equally fascinating is the question of how a guy steeped in the musical style of Led Zeppelin, who actually fronted one of the most successful East Coast heavy metal bands, has gone on to write music which captures all of the melodic integrity of the Americana movement while injecting a traditionalist country sound with rockabilly pizazz? Anyone who has ever seen Steve scribble a sketch or bought a print of one of his interpretive celebrity portraits can easily see him painting the basilica of east coast churches.

Steve Connolly, originally from Boston, Mass., currently performs nightly at his showroom in The 4 Queens Casino in Las Vegas. Connolly paints – on-stage – portraits of Elvis Presley, while delivering his electrifying musical performance at the same time! He has amassed over 4000 public performances, including shows at the MGM Grand, along with corporate engagements throughout Las Vegas, & recently at the Spa Casino in Palm Springs. Connolly was awarded “Best Elvis in Las Vegas” two years in a row by the Las Vegas Review Journal. His show has met with rave reviews from Las Vegas newspapers to the L.A. Times. His fan base includes well-known musicians and celebrities such as Steven Tyler, Kenny Loggins, Dennis Miller, former President Bill Clinton, and current President Donald Trump! Bobby Morris, Elvis’ conductor at The International, calls Connolly, “The number one Elvis on the planet.”