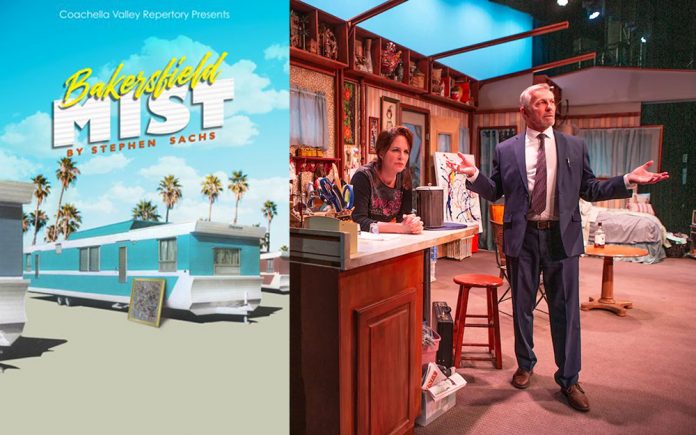 A ‘Two-hander,’ is a term used when referring to a play (or film) that involves only two characters and they are usually of equal importance in moving the storyline along.  They argue opposing points of view and the audience is allowed a more intimate glimpse of the character process, as each struggle to prevail.  It’s like watching two cars approach a head on collision and being unable to blink for fear of missing the final crash.

“Bakersfield Mist,” a one act drama by L.A. based Playwright, Stephen Sachs, is based on a true story.  Bakersfield Mist, is currently in production at the Coachella Valley Repertory and it’s a Two-hander that pulls the curtain back on a fifty-something year old unemployed bartender, (Maude Gutman,) living in a trailer park, who is convinced she’s found one of Jackson Pollock’s lost Masterpieces at a thrift store.  Maude, is smart, inebriated and looking for something significant to validate her life. Beautifully performed by the very down to earth and authentic Stephanie Erb, Maude is an unrefined, headstrong, woman who invites art expert Lionel Percy, (Arthur Hacket,) to authenticate the painting.

Percy, is a former director of the Metropolitan Museum of Art, who has been asked by an international foundation to either verify the painting or declare it a fake. Hacket, is wonderful,  very likable and sympathetic in his role as Percy, a man with high standards and obviously low regard for someone like Maude.  From the start he has little faith in the odds that she would find a Masterpiece in a thrift shop. Does that judgement skew his perspective on validating Maude’s find?  Erb and Hacket have palpable chemistry and I almost felt like a peeping tom sneaking a look through the dirty windows of Maude’s trailer.

Bakersfield Mist, is like watching a ballet on cracking ice, a Pas-de-deux between a broken ballerina and her principal dancing partner.  Being from opposite ends of the socio-economic spectrum, they see the world through very different lenses and that is obviously what makes them so fascinating to watch.  Both characters are shattered and flawed, yet Erb and Hacket give a flawless performance, allowing their individual character defects to seep through the cracks in all of their ugly glory.

Stephen Sacks, is a well- known and highly respected theatre professional.  He is the Co-Founder of the Mega Award-winning Fountain Theatre, in Los Angeles and his theatrical contributions are immeasurable. He has written an engaging and exciting Two-hander script.  Though alcohol is often the secret sauce when it comes to bearing one’s soul, it was a bit of a stretch to imagine the intimate biographical stories they shared with one another.  Maude, unfortunately got the short end of the stick when it comes to dimension.  As sometimes stereotypically happens with female characters, her world view is only conveyed through the eyes of her role as a mother and wife, unlike Lionel, whose beautifully crafted monologue showcases his dreams and his disappointments, Maude is limited to conveying her life experiences, as they relate to an Ex-husband and son.  I would like to have discovered how she ended up with all of her hopes pinned on a $3.00 painting, as much as learning about Lionel’s aspirations in the art world.

Ron Celona, directs this piece with all of the skill and artistry that we have come to expect from CV Rep. With only two characters on a very large stage, he masterfully balances the staging of two people who are simultaneously trying to find common ground and get away from each other within the confines of a house trailer.  He choreographs the avoidance dance beautifully.

Jimmy Cuomo’s, set design is a character unto itself.  Maude’s house trailer is cramped, a bit trashy and definitely reflects the interior design of a woman who collects her furnishings from thrift stores and yard sales.  Cuomo, is just brilliant in his ability to create sets that do not detract from the script, yet instead enhance the overall essence of what the story is about.  Cricket Myers sound design and Moira Wilkie Whitaker’s Lighting, bring a nuanced realism to this production.

CV Rep’s seasonal theme is “Hopes, Dreams and Expectations.” The last show that I saw before the Covid shutdown was “City of Conversation,” at CV Rep.  Sitting back in the audience of this gorgeous theatre made me feel as if I had finally come through the other side of the pandemic with a renewed sense of hopes and dreams.