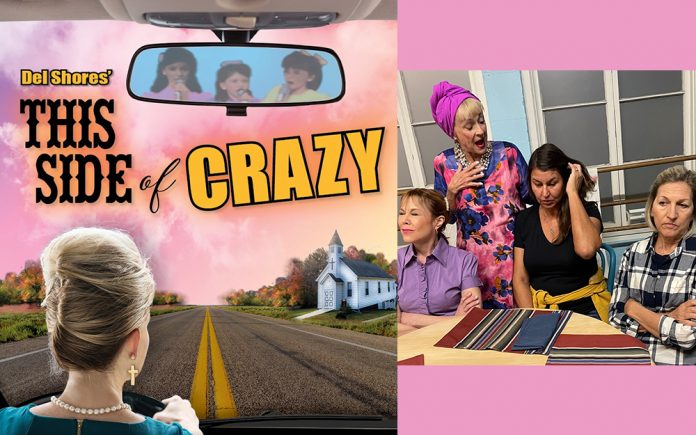 “My expectations of my girls, my children, my daughters, have just been stomped and splattered like an armadillo on a country road.”  Ditty Blaylock, This Side of Crazy.

No one knows how to turn a country phrase into pure gold, like playwright Del Shores.

Shores tells stories about southern families who have enough baggage to sink a houseboat and his newest play, “This Side of Crazy,” is sure not to disappoint.

Known as a collaborative art, theatre brings together the talents of the playwright, the director, the actors, all telling a story that is the culmination of multiple imaginations.  When a truly entertaining and well written script is taken under the guidance of a skilled director, performed by gifted actors and produced under the auspice of an experienced, top tier theatre company, you have what is known in the business as pure, theatrical magic.  Such is the case with Palm Canyon Theatre’s upcoming production of Award-winning Playwright Del Shores’ new, and sure to be a hit, play, “This Side of Crazy.”

Shores’, whose mega hits, “Sordid Lives,”, The Trials and Tribulations of a Trailer Trash Housewife, “Southern Baptist Sissies,” made him a household name, has now done it again with “This Side of Crazy.”  Inspired by Gospel songwriter, Dottie Rambo, This Side of Crazy, tells the story of Ditty Blaylock, the most prolific singer in gospel music history, who is being honored by Gospel Music Network.  But there is one glitch, Ditty, has promised a reunion of The Blaylock Sisters, her three adult daughters who were once “Little Superstars for Jesus,” but have now been estranged for 25 years.

The show is being directed by one of the desert’s leading men, (actor/director) Richard Marlow. When asked how he came to direct this piece, Marlow stated, “I was asked to read it last summer and immediately fell in love with it. There was humor, warmth and deep emotions, all arising from real human experiences. And the fact that it is a vehicle for four women of a certain age, we’ll that was a bonus. I knew from the start who my dream cast would be and I got them!”  Marlow indicated that the script makes him laugh, cry and deeply uncomfortable.  Sometimes all at once.

The four actresses lending their talent to this show are the award winning and highly sought-after Yo Younger as Rachel, Melanie Blue as Bethany, Denise Strand as Abigail and Deborah Harmon as Ditty.

Younger, a seven-time Desert Theatre League Award Winner, has appeared on most stages across the desert.  She had previously appeared in the role of ‘Latrelle’ in Shore’s classic play, “Sordid Lives,” and was very familiar with his work. She stated that, “I love the script because it has equal parts of great humor and warm touching dramatic moments.” Younger conveyed that  the Covid lockdown helped her to learn about what was really important in her life and made her realize how much she missed the stage.

Blue, moved to the desert five years ago after doing extensive work in Los Angeles and Chicago. She quickly made herself at home on the desert stage and has since won two Desert Theatre League Awards.  Though not previously familiar with the script, after reading it revealed that, “the subject matter hit very close to home-almost too close. I am the youngest of three sisters with challenging relationships whose larger-than-life mother wanted nothing more than to unite us in love before her death in 2018. So, this has been a golden opportunity for me as an actress to explore and express my own personal experiences through this story.” She went on to say that, “This script is a dream: four diverse, deep, richly drawn, and fascinating women of ‘a certain age’- chock full of comedy, tragedy, conflict and Jesus!”

Strand, is also a multiple Desert Theatre League Awards Recipient. Though not previously familiar with this script, she was excited to be a part of it.  She has the distinction of having performed in every production of a Del Shores play that has been produced by The Palm Canyon Theatre in the Past 15 years.

Harmon, started her career at the famed Second City in Chicago. She has starred in the TV series Just the Ten of Us, The Ted Knight Show, and The Paper Chase. She has also appeared in films with Kurt Russel and Tom Hanks.  She has directed and performed in multiple desert theatre shows and is a recipient of Desert Theatre League awards for both acting and directing.

This Side of Crazy, will run one weekend only, November 18-21 at Palm Canyon Theatre

538 N. Palm Canyon Drive.  Playwright Del Shores will introduce the show and will participate in audience Q&A after the show on Opening Night. For ticket information please visit www.palmcanyontheatre.org

If you are looking for a fun night out (and who isn’t?) don’t miss this theatrical piece of gold.