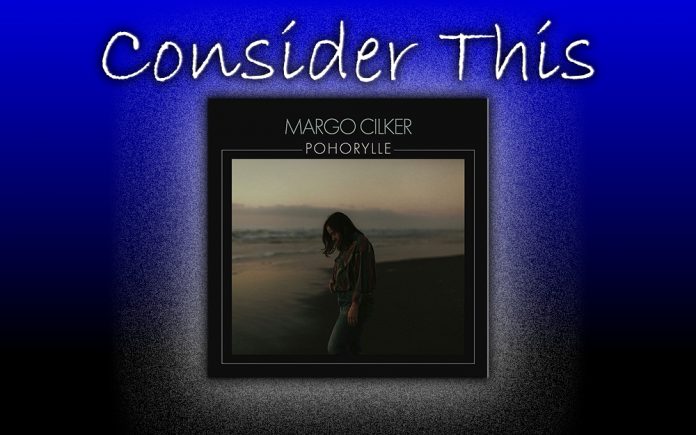 “Fortune favors the bold and the far away from home”

That’s Margo Cilker sharing a conversational gambit off the opening track of her full-length debut, Pohorylle. Her first long-player (following three EPs), is named for German- Jewish photographer, Greta Pohorylle. Known professionally as Gerda Taro, she is considered one of the first female photo-journalists, and the first to die, covering the frontline of the Spanish Civil War. There’s an ache and a world-weariness in Margo Cilker’s voice that belies her tender years. The 28 year-old was born in California, grew up in the Bay Area and spent time in Spain’s Basque Country and South Carolina. Her nomadic upbringing helped shape her songs.

Music is in her blood, starting with her maternal Grandmother, Esther, who was her earliest inspiration. During her youth, Esther and her sisters formed a vocal group, The Smith Sisters. The music Margo heard in church also made a vivid impression. She soaked up quite a bit of Alternative Rock, later experiencing a musical epiphany after attending a Kate Wolf Music Festival. It was then that she realized harnessing all those disparate influences would enable her to create her own style. After ditching piano lessons as a kid, she began taking guitar around age 12. She had a supportive teacher who encouraged her to form a band almost as soon as she learned to play. That’s when she began writing her own songs. She made her bones playing in Garage bands in high school. By college she became a regular at Coffeehouses and Open Mic Nights. In 2015, she hooked up with a band of U.K. based musicians and they invited her to join the band for their British tour. It was then that she began to understand the mechanics of fronting a band, putting together a cohesive setlist and connecting with an audience.

Returning to Oregon as a solo act, Margo released a couple of well-received EPs and hooked up with Portland-based Fluff & Gravy Records and hunkered down in the studio to make her recently released, full-length debut.

“That River” kicks the record into gear as plaintive piano notes connect with roiling bass lines and a chunky beat. The mise en scene is set inside a moving car, Margo provides a running commentary as she whizzes past Oregon landmarks; “That river, in the winter, it could fuck me up, crack my ribs, bust my lip, it could do enough.” Halfway through, dissonant harmonies are enveloped by keening violin. The narrative meanders through Minam and the Jordan Valley, before winding up at the old Basque hotel. Violin and piano enact a stark pas de deux on the break, mirroring the lyrics’ equivocation.

A couple of cuts, “Broken Arm In Oregon” and “Brother, Taxman, Preacher” feel deeply personal. Musically, the former is shimmery and expansive, blending percolating piano, winsome guitars, sturdy bass, whistle-y keys and a propulsive rhythm. The opening couplet cryptically recalls tougher times with a few neatly turned phrases; “Well, this season it reminds me of being down and out in Carolina, I drove back to California and took my time/Had a friend he rode beside me and when we made camp he would sing to me, it seems like such an inconsequential thing.” The lovely melody and irresistible combo-platter of shivery violin, stately piano and sweeping guitars on the break lull the listener into a false sense of security before the final, heartbreaking verse unfurls; “Heard a woman go on record, sayin’ there’s one night that wrecked her, when a young man closed his hand across her mouth/Now every room she sleeps in, she’s gotta map out her escape plan, imagine all those hours devoted to bigger things.”

The latter is built around descending guitar riffs, Honky-Tonk piano, slithery bass lines and wily keys, all tethered to a clip-clop gait. Sly lyrics find Margo kinda-sorta coveting things she cannot have, wishing for her brother’s charming social skills, and a taxman’s misanthropic avarice. But she saves her vitriol for a sanctimonious man of the cloth; “I wish I was a preacher, I could tell you who to love, I could tell you who to vote for, who to pity and who to fuck, I wish I was a preacher, I’d know what it means to know everything.” On the break, spiky guitars coil around comely piano notes, dirtying up the pretty, neatly underscoring her withering critique.

The best tracks here quietly unpack a plethora of conflicting emotions that feel heartfelt and true. Flood Plain” limns a high lonesome ache that can’t be faked. On the first verse, it’s just Margo and some burnished acoustic guitar. Her manner seems jaded and resigned as she bids farewell to a lover. But the façade quickly slips away, as steels herself; “….I’m sorry I hold you tighter than I ever held myself.” Swaying into the chorus, guitars are augmented by searing pedal steel, poignant piano, slivery strings and bare bones percussion as she issues this hangdog ultimatum; “If you’re stayin’ stay, if you’re goin’ go, just remember that I am home, if you’re drivin’ drive, gotta ramble, ram, don’t forget you always come home.”

Finally, the album’s tour de force is “Tehachapi.” The opening guitar chords on this shapeshifter slightly shadow Janis Joplin’s epochal take on Kris Kristofferson’s “Me And Bobby McGhee,” before locking into a high-steppin’ Honky-Tonk groove. Fluttery piano connects nimble guitars and sinewy bass to an oompah-pah horn section. Margo mourns the sudden departure of wayward companion; “Wasn’t much of a warning, he disappeared one morning, put his mattress up on the back of a pickup truck, I’d been workin,’ my shoulders were hurtin,’ I was learning how to turn my muscles into somethin’.” As the arrangement ebbs and flows the song slips into a Big Easy-fied Second-Line groove on the break. Here, Margo slyly pays homage to late Little Feat front-man Lowell George, as lyrics sideswipe his trucker’s lament, “Willin.” Recalibrating the rhyme, she excises the weed, whites and wine, and insists “Told you I was willin’ but you heard strugglin,’ tell me how does a girl like yours end up so desperate? It’s these Little Feats that keep me goin,’ and the day that I quit tryin,’ that’s the day that my heart stops growin.’”

Other interesting songs include the lachrymose, tears-in-my-beer growing pains of “Chester’s” and “Kevin Johnson,” Big Pink-y flavored character study. The record closes with the restless farewell of “Wine In The World.” The melancholy melody is powered by descending piano chords, jangly guitars, ethereal keys, sturdy bass and a slow, shuffle-rhythm. Wry and reflective, lyrics take some emotional inventory; “I’ve had my share of adventures, and I’ve been no stranger to fun, rooms full of music and laughter, and we all look all the same-every one.” Still, she holds her cards close to her chest, deflecting and dissembling; “I’m a woman drinks deeply, it’s my rosy coping mechanism, and it keeps my heart safe.” As gauzy pedal steel wraps around churchy piano notes, the final verse reflects on the peripatetic existence of a working musician; “A funny thing happened last time I was out traveling, nobody’s lives stood still, my grandfather tended to his bees and his garden, and we lost him on the first of the year/I’m a woman split between places, and I’m bound to lose loved ones on both sides, it’s just my life-I can relate, create, participate, I just wish I had more time…I wish I had all of the time in the world.” It’s the age-old conundrum of compromise, there are no easy answers. It’s a poignant end to a great album.

“Pohorylle” echoes legendary antecedents like Neko Case, Patty Griffin and Gillian Welch. But Margo has crafted a thrilling sound that’s all her own. Her music is suffused with grit, grace and gravitas.