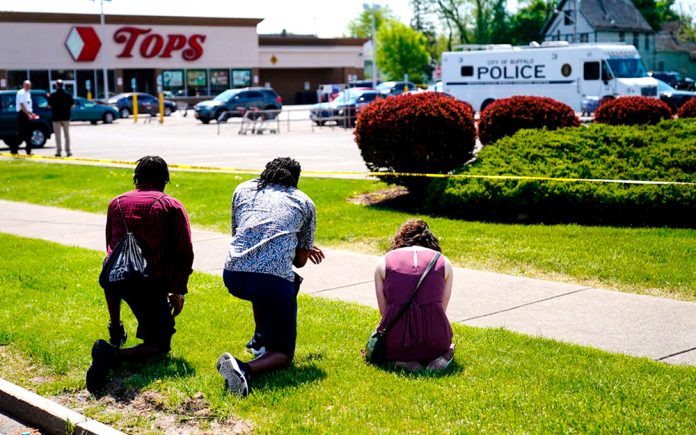 The livestreamed shooting spree by 18-year-old Payton Gendron that left ten African Americans dead, and others wounded should be the latest of a growing number of hate crimes sweeping the United States.  But it isn’t.  On Sunday, David Chou, a Chinese immigrant initiated his own shooting spree at the Geneva Presbyterian Church in Laguna Woods near Irvine.  This Taiwanese church was providing a lunch banquet to the fifty parishioners in attendance when Chou opened fire.  Due to the bravery of slain Dr. John Cheng, he was the sole fatality.

Earlier in the week, three people were shot in a Koreatown salon in Dallas.  In this case, an African American man who has been targeting Asian-owned business is the at-large suspect.  The same suspect is believed to have done a similar attack on a Chinese restaurant only one month earlier.

According to Brian Levin, the executive director of the Center states that early data for the first quarter of 2022 suggests a 30% increase over 2021’s dismal findings.  His research suggests that hate crime activity goes up during mid-term elections with the peak violence period being in the sixty days prior to the elections.  If May is an indicator, it is going to be a very hot-tempered summer.

This sample set showed that we had more than 3,100 hate crimes last year.  Looking at Federal Bureau of Investigation (FBI) statistics for 2020, 8,263 hate crimes were reported.   Using CalState-San Bernardino’s 40% increase estimate for 2021, this would suggest more than 11,000 hate crimes in 2021 with more than 15,000 projected for 2022.  When we factor in the impact of the rollback of the Roe vs. Wade decision, we need to be prepared for a very uncivil election season.

A hate crime is defined as a criminal offence motivated by a prejudice against someone’s race, religion, ethnicity, disability, gender, gender identity or sexual orientation.

What can you or I do?

Be nicer.  Even if the person serving you is chewing glass and spitting it back at you as they work, do not feed upon that negative energy.  Be an engine of change and show them the better way to behave.  While we all want to complain about dreadful service and high prices and the worker who just doesn’t care, we feed into the problem when we are negative as well.  Be a beacon of change and share the light you want others to follow.

Do not accept bad behavior.  We all have a friend or family member who embodies the prejudices and anger coursing through many Americans these days.  If they behave poorly, tell them how you feel and avoid getting bated into uncivil discourse.  Short and simple.  Have them respect you as they wish to be respected.

When we see hate or bias at work, report it.  We need to be intolerant of intolerance.  If we can ban cigarettes from offices, restaurants and other public places, we need to be the same way toward bad behavior.  I personally ban carnival barkers like Tucker Carlson who earns millions by fanning the flames of intolerance and prejudice.

When it comes to elected leaders in politics, we need to exclude those who serve as merchants of division and hate.  As an example, do not vote for anyone who states that the KKK is filled with good people.  People who align with the more radical elements of both major political parties due to belief or convenience need to be cancelled.  When voting in the upcoming primaries or November mid-terms, do not vote for the status quo if you do not like the status quo.

Haddon Libby is the Founder and Chief Investment Officer of Winslow Drake Investment Management.  For information on their award-winning services, please visit www.WinslowDrake.com.