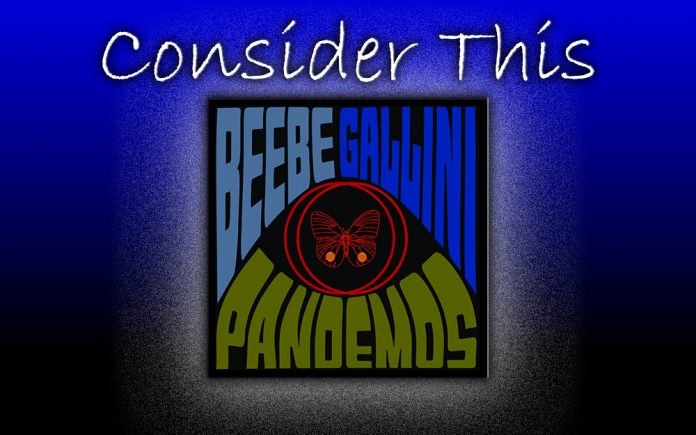 Sometimes, all you need is to hear the name of a band and know immediately that their music will be cool. When I heard there was a Minneapolis female-centric band called Beebe Gallini, I knew instinctively their sound would be beyond bitchin’.

If you were a child of the ‘70s, you probably grew up with shag haircuts, shag carpets, bell-bottoms, the ABC Afterschool Special and plenty of Hamburger Helper. It’s also pretty likely that you know who Beebe Gallini was.

For the uninitiated, “Beebe Gallini” was an eccentric character who appeared on an early episode of “The Brady Bunch.” A demanding cosmetics queen who has commissioned Mike Brady’s architecture firm to design a new factory. Unimpressed with his drawings of an actual building, she commands it should reflect her outre’ personality. It should be shaped like a lipstick or a compact, maybe a powder puff. “Fluffy, Mike, it must be fluffier” she insists. (You’re going to have to seek out the episode, “Mike’s Horror-Scope,” on MeTV to see what happens, I won’t spoil the ending).

Beebe Gallini the band, has been around for a few years. They’ve released a couple of well-received EPs and experienced a couple of personnel changes but the current line-up features a who’s-who of Twin Cities Rockers, including Miss Georgia Peach (Gloo Girls, Speedway, Rhinestone Chassis) on lead vocals and rhythm guitar, Amy Larson Pearson (Strumpet, Brownstar, Brits Out Of America) on bass and backing vocals, Travis Ramin (Juvie, Nikki Corvette and The Stingrays, The Fevers) behind the drum kit and Monet Wong (The Toxenes, L’Assassins, XOXO) on lead guitar and backing vocals.

At the start of 2020, Beebe Gallini was demoing stuff for their upcoming album. Then the pandemic hit, shuttering most of the country and hitting the music business particularly hard. Faced with the choice of shelving the album or moving forward, the four-piece opted to harness their (limited) resources and soldier on. Occasionally bartering for goods and services, the unvarnished songs were mixed and mastered as soon as studio time was available. The result is a tight 13-song set, aptly entitled Pandemos.

The opening cut, “Little Sister,” simply swaggers. Buzzy guitars ride roughshod over angular bass lines and a see-saw beat. The instrumental strut is matched by Georgia’s take-no-prisoners posture as she offers a withering dismissal of her sister’s potential beau; “Hey Buddy, I don’t care that you got money, so hear me now and listen to what I say, pack up your kit and go away.” Guitars sweetly spiral on the break, slightly softening the lyrics’ menacing tone.

Beebe Gallini’s sound hits that sweet spot between Psych, Garage and Power Pop. Although the album is dotted with a few covers, their original songs feel just as potent as the classics. Amy is responsible for both “Love You Doll” and “Danny.”

The former is a swirly soundscape powered by kaleidoscopic guitars, hypnotic bass and a punishing rhythm. Vocals are suitably snotty and succinct. The latter lashes waspish guitars and tensile bass lines to an anvil beat. Dissonant vocals are paired with arch lyrics that caustically pine for the one that got away; “Danny went off to the West Coast, in a Chevy 1963, livin’ off his voice and his pretty, pretty face, boy, Danny left the family tree.”

Georgia’s contributions include the elusive “Dusty” which weds distorto guitars to bruising bass fills and a walloping backbeat. Slippery harmonies envelope defiant lyrics like “Nothin’ you say will get through, she knows what’s best, you worry ‘bout you/Don’t wanna talk, just open the door, struts out like a queen, she’ll sleep in the mornin.”

Vroom-y guitars connect with tensile bass and a rattle-trap rhythm on “Married Men.” Lyrics draw a line in the TINDER sand before swiping right; “If you’re single we can mingle, if you’re married get gone/I can’t think about you when I’m alone and won’t step over that line if you’ve got someone at home.” On the break, stinging guitar riffs dissolve, morphing into shiny, jingle-jangle licks.

Meanwhile, “Poppington Station” executes a stylish 180 and sticks the landing. Shang-a-lang guitars wash over wiry bass lines and a clickity-clack beat. The band wears their Anglophilia on their sleeve as the winsome melody and arrangement echoes The Kinks’ pastoral slice-of-life and mid-period masterpiece, “Waterloo Sunset.”

Trenchant covers are sprinkled throughout the record. First up is a blistering version of “My Way Of Thinking,” a ‘60s chestnut originally recorded by Memphis Garage combo, Randy and the Radiants. Strafing guitar riffs crest atop spiky bass lines and a pummeling beat. Strident harmonies shimmer and shake and a pinwheeling solo on the breaks straddles the line between Garage and Punk.

The Gories out of Detroit Rock City had a regional hit with “Thunderbird ESQ” in the late ‘80s. Beebe Gallini’s take blends yowly vocals, infectious, chicken-scratch rff-age, throbbing bass fills and a meaty, beaty, big and bouncy backbeat. Guitars stack on the break as the candy-coated crunch gives way to a soft and gooey center.

They make a sharp left-turn on the Bee Gees’ classic weepie, “To Love Somebody. By tethering heartfelt vocals and frizzle-frazzle guitars to prowling bass lines and a tick-tock beat, they succeed in recasting the song as a rampaging Rocker that manages to retain its Soulful core

“Bad Man” shares some musical DNA with both The Young Rascals’ “You Better Run” and The Blues Magoos’ “We Ain’t Got Nothing Yet.” Snarly vocals are folded into ricocheting guitar riffs, hopscotchin’ bass and a blitzkrieg beat. Caustic lyrics take a selfish swain to task; “How many hearts did you break, seems like the whole wide world, mine, hers and that little girls/Were you born this way, just lust and no love, or did you become it, were you born with no soul.” Skittering and scabrous guitars intertwine on the break, but the final verbal bon mot is delivered on the bridge; “Can’t justify you, can’t reconcile you, is there love left inside, or was there ever any on you?”

Finally, thundering drums pound out a tribal tattoo under jittery bass and reverb-drenched guitars on “Busy Izzy.” Apparently, Izzy is all booked up; “Try to get her to calm down, she ain’t havin’ none, she just won’t slow down, she’s got to have her fun.” Rattlesnake shake guitars wrap around a caffeinated Bo Diddley beat urging the song toward a sweat-soaked conclusion.

The album closes with another late ‘60s nugget, The Traits’ “Nobody Loves The Hulk.” Roughhewn and primitive, the lyrics offer a comical retelling of Bruce Banner’s origin story; “The pentagon announced that the Hulk has to be destroyed, they shot him with H-bombs, the Hulk only became annoyed/All he wanted to do was settle down and be employed BUT nobody loves the Hulk! We don’t allow no green-skinned people here.” It’s a funny, full-throttle finish to their first official long-player.

Although the word “demo” is built into the title of the record, there’s nothing tentative or sketchy here. This music feels fully-formed, but endearingly unpolished, striking a perfect balance.

Walking in the footsteps of antecedents like The Pandoras (R.I.P. Paula Pierce), Mary’s Danish and The Muffs R.I.P. Kim Shattuck), Beebe Gallini manages to carve their own path. Their music is lean and economical, and it boasts a powerful jolt of distaff energy. Bottom line: Pandemos is the utmost fun.