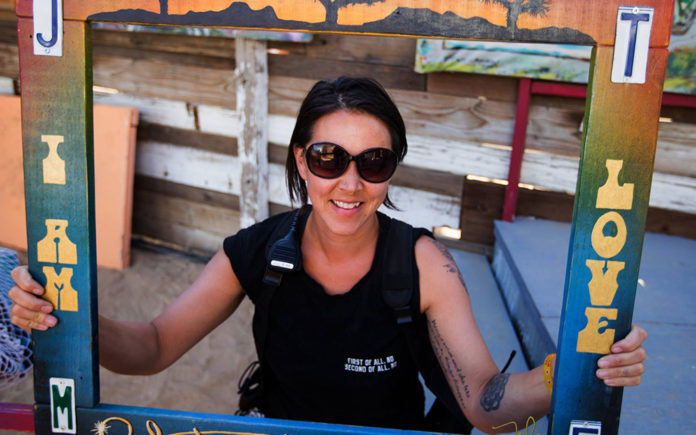 We sat down with Cassie Morrow, founder Barnett English’s right-hand person to better understand what goes into creating the Joshua Tree Music Festival (JTMF) as well as things to keep an eye out for.  The 17th annual spring festival runs from Thursday, May 16th through Sunday, May 19th with camping through Monday, May 20th.

“We have had a crew working since mid-February and full-time since about mid-March,” shares Morrow.  When walking around the festival grounds, attendees will “see a lot of structures and fences made from repurposed materials,” offers Morrow.  Showing people how to reuse and recycle common items that we routinely dispose of is part of the JTMF experience.  One impressive example of this is the Sound Cave, a musical sculpture that houses thousands of strings placed so that every note sounds good when played.

A team of over 100 work exchangers volunteer their time before, during and after the festival in return for free admission during the four-day festival.  This is part of the festival’s community focused ethos.  While most of the volunteers are local, “they also come from all over the United States along with some from other parts of the world.”  Founder Barnett English is adamant that the festival focus on community and a shared experience.  To date, he has avoided festival sponsorships that might commercialize the festival and erode its family/community focus in pursuit of greater revenues.

Cassie Morrow met English while living and working in Tahoe. “I was looking for something to do for the summer,” reminisces Morrow.  “My housemate at the time was a good friend of Barnett’s and suggested I go help out at his mobile coffee vending booth and check out some music festivals. I naturally started coming down to Joshua Tree Music Festival, and the rest, as they say is history.”  Morrow subsequently relocated to Joshua Tree to become English’s right hand person on virtually all festival matters.  As one familiar with English might expect, Morrow’s position did not have a title, “I was encouraged to come up with a fun title…I’m still trying to come up with mine. If someone can come up with a snappy title that encompasses marketing, sales, PR, event production and volunteer coordination among many other things, I’d love to hear it!”

Regardless of title (we will call her the Chief Everything Officer), Morrow has a very cool job, interacting with the artists and people that make JTMF what it is.  “A typical day during the event could involve coordinating press interviews for artists, announcing bands on stages and restocking the toilet paper in the port-o-lets by headlamp at 11pm at night.”

“I have discovered so many new acts I love just by being involved with the festival, and also broadened my musical tastes a lot. At the festival, if something makes me want to dance, that’s what draws me in. That could be anything from funk or hip-hop to afro-beat or a rocking DJ set at the Boogaloo.  I don’t get to enjoy the festival in the way an attendee would, but luckily I love my job and the people I work with so I’m generally having a pretty good time. And the perks of the festival being the size it is and the stages being only 50 feet from the Production Trailer means that I can sneak away to check out most acts at least for a song or two.”

When asked for recommendations on things to be sure and do during the festival, Morrow is quick to suggest that “people check out the Playshop schedules as well as the Songwriter Sessions. There are typically appearances by at least a few of the artists you’ll see on the main stages and this is an amazing opportunity to get to interact with them on a more intimate level that you would never get at a larger festival.”

To those unfamiliar with the festival and attending for the first time, Morrow suggests that they “Approach with an open heart and mind. Don’t check your phone until Monday.”

Whether you are a new or returning attendee of the festival, a good time is sure to be had by all.  For more information on the 17th Annual Joshua Tree Music Festival, visit JoshuaTreeMusicFestival.com.