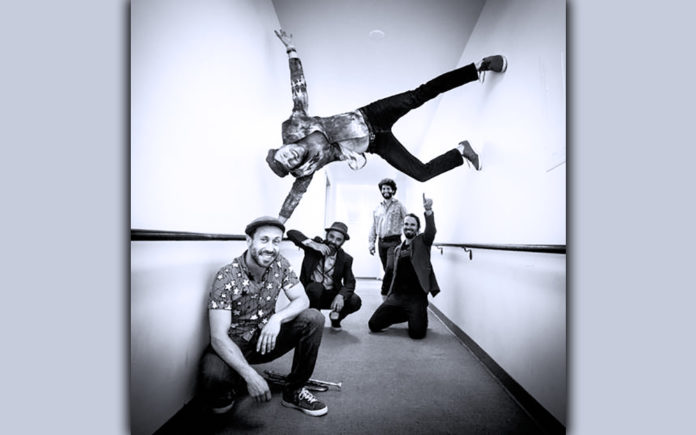 The Joshua Tree Music Festival is underway from Thursday October 10th through Sunday October 13th.  Taking the stage on Friday night at 10pm are JTMF favorites, The California Honeydrops.

The Honeydrops are the creation of guitarist, trumpeter and vocalist Lech Wierzynkski and drummer Ben Malament.  CV Weekly had the distinct honor of interviewing Ben Malament during a break in rehearsal at their Bay Area studio.

If you are unfamiliar with the Honeydrops’ sound, theirs is a sweet mixture of old sounds and new styles fused in a way that brings people of all ages together with smiles, sways and the occasional swing dancers.  Their music is rich jambalaya of New Orleans-influenced jazz and blues with R&B and funk rhythms.  On percussion, Malament has a unique assortment of instruments that will include an antique Maid-Rite washboard, a jug or gutbucket bass.

“Translating the energy of the live shows…that is the challenge,” offers Malament as we discussed their most recent release, the six-track EP, Honeydrops Live 2019.  The new album is a collection of favorite live performances from the road.  One of the things that Malament likes most about performing live goes back to their origins in the BART subway stations in Oakland. Malament loves the “improvisational direction” that a live performance can bring.  Audience energy is something that they pay attention to, “We want people moving and having a good time.”

The Honeydrops most popular track, “When It Was Wrong,” is a swinging, soulful, upbeat and happy tune that playfully ponders the end of a relationship and the choice to remember the good times and move on instead of accepting its descent into blandness and indifference.

Last year, the Drops as the band often calls themselves, released the double album Call It Home, Volumes 1 & 2.  The title track, “Call It Home,” is a bluesy duet between Lech and Bonnie Raitt.

That performance was the result of Raitt contacting Lech about the possibility of recording one of their songs, “Here Comes Love,” on her then upcoming album, Dig in Deep.  While their song did not make the album, it did lead to the band opening for Bonnie Raitt on her 2016/2017 tour in support of the album.

During that tour, Raitt would hang out in their dressing room, singing improvisational to whatever the band was jamming on.  One of their breaks during the tour, Raitt drove over to their studios in the Bay Area and recorded the title track to their 2018 double album set, Call It Home.  On that sixteen song set, there are two hidden gems that most people overlook that include the Bonnie Raitts’ keyboardist, Mike Finnigen.

Finnigan sat in and played on “Live Learn,” about as good a blue-eyed soul song as you will hear. The other track with Finnigan is “Silicone World,” a swanky, sexy, bluesy jazz number that juxtapositions the songs modern world focus with sounds that send one back to the fifties.

It is important to note that the band contributes 10% of their profits from every show to a local charity.  Their non-profit partnership program is called Spreadin’ Honey and meant to advance important projects in the cities that support them.  As there are still some open spots for local charities on their fall tour, visit the band’s website if you know of a deserving charity.