What may be the best movie of the year is in limited theatrical release and streaming on Netflix.

David Fincher’s brilliantly crafted masterpiece is about old Hollywood and the power of the written word. 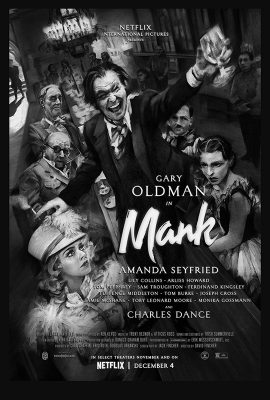 The beautiful black and white film is meticulously composed and edited to look like an old restored film. Finch’s obsession with detail is astonishing and a perfect canvas for Gary Oldman’s incredible incarnation of functional alcoholic screenwriting genius Mankiewicz, during the time he was writing the Orson Wells directed Citizen Kane which was originally called The American (RKO came up with the Kane title).

This engaging film is a time virtual time machine to another place and era.  Mankiewics was a very complex man.  The movie is a character piece about a truly gifted but tormented genius, filled with shame and self-loathing along with a prodigious wit.  Oldman doesn’t look much like “Mank,” nor does he appear to wear significant prosthetics.  He does bring to Finch does not hesitate to incorporate all the delicious nastiness and cynicism of the movie biz of then (and now).  Mank came to Hollywood to write title cards for silent films.  His writing gift was early noted and he became a go-to writer, a “script doc” who was hired to “fix” scripts others had written.

The film incorporates themes that are relevant in our age of politics and media manipulation as it recounts publishing titan William Randolph Hearst’s attempts to shut down production of a movie that appeared to be about him in what was a mostly unflattering portrait of his private life at his sprawling San Simeon estate. 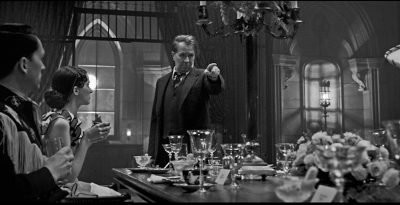 The period feel of 1930s Hollywood and the Victorville ranch where Mank went to recover, reflect and work is something to behold and reason enough to enjoy this amazing movie.

The biggest controversy about Citizen Kane among both film buffs and scholars is who actually wrote it?  This movie, in a witty final shot, sides with Mank.

David’s father, Jack Fincher who died in 2003, wrote the screenplay years ago.  It has a clever structure that in many ways mirrors Citizen Kane’s.

This remake of a Swedish film is a great looking, twisty thriller devoid of emotional heft. 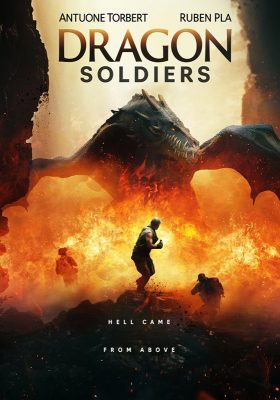 Almost laughable in its inept and amateurish cheapness, this is a perfect example of wheat the denigrating term “straight to video” used to mean.  It’s not a compliment.

When locals start vanishing from a small Colorado town, the mayor hires a squad of elite mercenaries to fight off the menace – whoever or what ever it may be.  The leader Cameron (Ruben Pia) and his team suspect a ruthless gang of mercenary survivalists… until they come face to face with a massive airborne fire-breathing reptile.  Now, stopping the creature and surviving the attacks will take weapons, explosives and gunfire, along with every ounce of courage they have left.  Lionsgate.  DVD