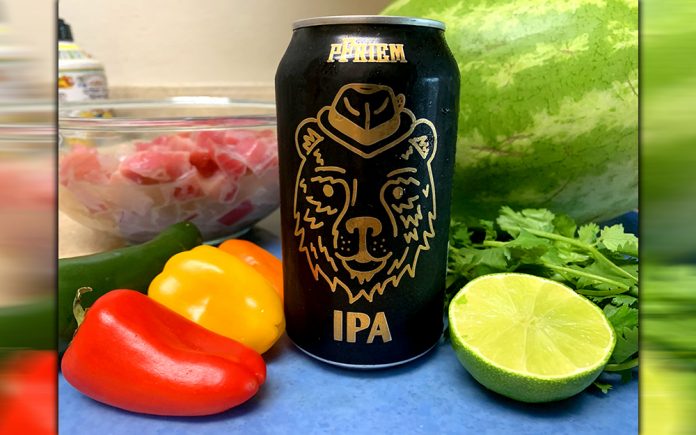 I had a pet guinea pig when I was little, and his name was Iceman because he had these spikey, blonde frosted tips, and I’m pretty sure he’d get into locker room rivalries with guinea pigs named Maverick and Goose if he were ever given the chance. Iceman had this big, clear, plastic exercise ball that I’d put him in so he could roll around the house and explore without getting lost or eaten by the family dog. Iceman was one of the coolest pets I ever had, and at no point did I ever look at him and wonder what he’d look like deep fried. Yet, guinea pigs, or cuyes as they’re called, are a delicacy in Peru, where Peruvians consume around 65 million cuyes every year. I didn’t know you could eat guinea pigs until I was researching for this article. If you’d asked me yesterday what I knew about Peru, I’d have said Incas, Machu Picchu, and Llamas.

I had no idea that one of my favorite dishes came from Peru (no, not fried guinea pigs). I’m talking about ceviche. 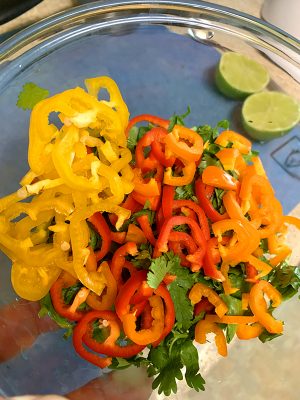 At its core, ceviche will always be fish or shellfish, citrus juices and salt, but depending on where you have it, the rest of the ingredients may vary wildly. Just about every country in south America has its regional version of ceviche, complete with individual touches and particular garnishes. The ancient Incas were said to have marinated fish in fermented fruit juices, but it was the Spanish colonialists who brought the process of using citrus juices to denature the proteins in fish and shellfish to “cook” them.

Adding the bright, sweet flavor of watermelon to ceviche is said to have popularized in Baja California. With hop flavors that can range from grapefruit zest to musky tropical fruit, adding IPA to the marinating brine seems a no brainer. While chili peppers are a very common ingredient in ceviche, I chose to add slivers of sweet mini peppers as well as jalapenos to mine for color, crunch, and brightness.

Traditional ceviche is marinated for 3 hours, but many modern versions have a much shorter marinating period, including this recipe.

WATERMELON AND IPA CEVICHE WITH SHRIMP AND AHI 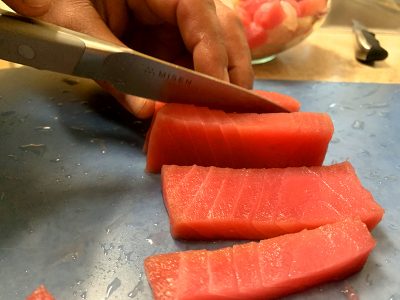 1 cup of your favorite IPA

Remove shells from shrimp, cut shrimp and ahi into a medium dice, about ¾ inch, and put both into your brine:  sea salt, IPA, lemon juice, and lime juice. Cover and set into refrigerator while you cut and prep your watermelon and peppers. 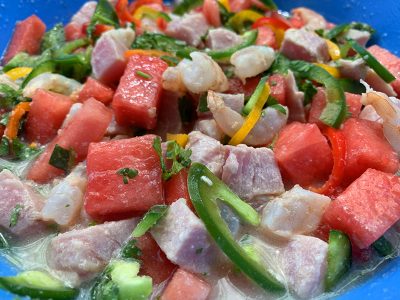 Cube your watermelon into 1-inch dice, cut your jalapeno and sweet peppers in half lengthwise, then slice thin into half-rings. Combine watermelon, peppers, cilantro, and onion powder in a large plastic or glass (non-reactive) mixing bowl.

By now, your shrimp and ahi will begin to firm, and turn opaque from the citric acid brine. Combine the fish and brine with the watermelon and peppers so all ingredients are together. Fold gently with your hands, or maybe fold it with a flexible silicone spatula if you have something against touching your food with your hands (some people do. Just don’t be a douche and wear those black, latex gloves that you see guys wearing on Instagram. You don’t need your ceviche tasting like you’re trying too hard to look cool). 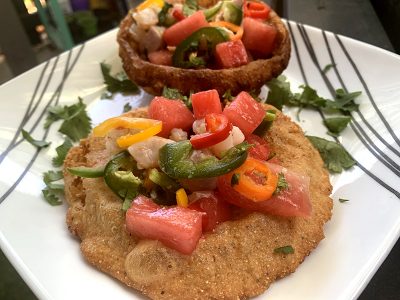 Taste and season with extra salt if necessary. Put back in the refrigerator and let your ceviche marry for another hour as the flavors meld into each other. After that, it’s ready to eat. Serve on tostada or with a side of tortilla chips, as well as your favorite IPA.