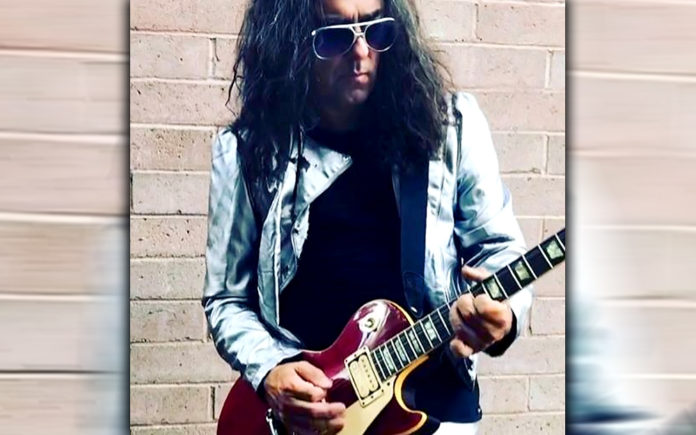 PERFORMING LIVE AT THE HOOD BAR AND PIZZA SATURDAY, AUGUST 10, 2019

Talented rock guitarist, composer and multi-instrumentalist Billy Tsounis will be bringing his Psychedelic-Jam-Space-Rock band Billy Tsounis and The Amazing Androids to the Coachella Valley for the first time on Saturday, August 10, 2019 at The Hood Bar and Pizza in Palm Desert, California performing with 3rd EAR EXPERIENCE (Dug Pinnick, Robbi Robb, Mike Hansen and Amritakripa) and WAXY (Robbie Waldman, Jeff Bowman and Robert Bowman). The show starts at 9 p.m. and there is a $10 entry fee.

A Berklee School of Music alumni, Tsounis writes and performs all-instrumental music. He has done extensive session work and teaches music at the Temecula Music Academy and the Harvard Street Music Exchange in Hemet, California.

His original music has been featured on MTV and CBS television networks and he was profiled in the January 2017 issue of Guitar Player magazine. His album, Pimped By The Gods, embodies the sound he reaches to achieve through his experimental and psychedelic compositions.

Coachella Valley Weekly spoke with Tsounis about his storied history and desert debut.

CVW: Tell us how Billy Tsounis and The Amazing Androids came to be?

Tsounis: “Billy Tsounis and The Amazing Androids came about after I decided I wanted to record some of the instrumental and experimental music I had been writing and recording. Along with my band, we give some form to the jams so we can perform them live.”

CVW: Your most recent Billy Tsounis and The Amazing Androids album, Pimped By The Gods, is ‘amazing’ (no pun intended). What is it you attempted to accomplish going into this recording? 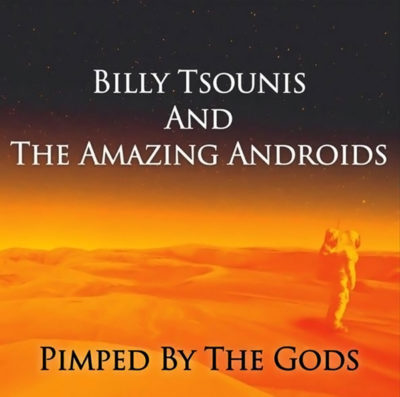 Tsounis: “With the recording, the plan was to put some of my demo/skeleton ideas with a full band into effect and stretch them through ‘spur of the moment’ compositions along with improvisations. Our strategy was to make the album guitar-centric, have fun and indulge the parts with no form or song length restrictions. Most of the tracks were recorded in one take with additional overdubs. We had two rehearsals and two shows prior to the recording but if you can psych the recording room with a vibe of musical freedom, then it’s contagious and the jams flow.”

CVW: Tell us about the musicians on the record and your past/current band members.

Tsounis: “The musicians on the recording are Lucas Marquardt on electric cello, Aris Weathersby on bass guitar, and Theron Lynott on drums. I’ve known Lucas for a while. He has a vast knowledge of classical, prog and experimental music. He also has a great ear and is very creative. Aris is a former student of mine. I taught him guitar at age 13 for about 5 years. He is a great guitarist, multi-instrumentalist and recording artist in his own right. He interprets pieces of music beautifully. Theron was recommended by Aris and is super solid. He memorizes and plays his parts exactly as needed. He also has his own band and gigs around Los Angeles, California. For the upcoming show at The Hood I have Noah Estrella on bass. Noah has a great ear and instinct, he’s an awesome multi-instrumentalist, very creative and a great improvisor. He learned the set in just a few hours. On the drums will be Austin Malik, another multi-instrumentalist and very solid drummer who does the music justice. I met them at the music store Harvard Street Music Exchange in Hemet, California where we all work and rehearse.”

CVW: You and Robbi Robb have a long-standing friendship and musical relationship. What can you share about your experiences with him?

Tsounis: “Robbi and I both grew up in South Africa and I used to go and see his band The Asylum Kids play. We even jammed once at a place called The Boogie Barn, in Hillbrow, a residential neighborhood in Johannesburg where they had open jam nights and I just jumped on stage, but I actually met him when his other band Tribe After Tribe played in Boston, Massachusetts back in ’92. We have a lot of similar musical tastes and interests, they just get filtered differently, along with threads of where we’ve lived, the music we were exposed to, food, attitudes and humor. We kept in touch through the years and I told him I was moving to L.A. so he said why don’t you come be my guitar tech for a few weeks on the Pearl Jam tour and we can get music ideas going. I did that and when we got back to L.A. we started working and recording on various Tribe After Tribe albums, did some shows together as well as assorted recordings with others and he also produced a CD of my other band, Vasoline Tuner, a No-Wave Freak-Pop type of band. So, in a way our friendship revolves a lot around the musical, artistic, philosophical and esoteric avenues. We’re currently working on some jams. Robbi is the perfect musical co-pilot/cosmonaut to go tripping with.”

CVW: What can music fans expect from your show on 8/10 at The Hood?

Tsounis: “You can expect a lovely sonic salad and waves of psychedelic/punk-jazz sounds billowing out in our drone-age reality. It’s my first show in the area. I’d like to thank Desert Music and Robbi for getting me on the show. I’m looking forward to it.”

CVW: Some musicians despise genre-specific labels, and some thrive on it. How do you feel about being identified as space/psychedelic rock? Do you identify with those terms?

Tsounis: “I don’t mind being identified as that at all. It’s a lot of that and quite a few music fans actually like to have some sort of reference of their choice to feel comfortable with what they’re listening to.”

CVW: As consumers we can be invariably conditioned to expect lyrics along with music. What can instrumental music do that music with lyrics cannot necessarily do?

Tsounis: “I think that instrumental music can conjure up feelings or images of the listeners choice. It can be their own personal soundtrack and thus setting up a different mood for each which, even if explained to another, is still unexplainable. It’s like describing shapes of clouds to somebody but they see it differently.”

CVW: You gratifyingly teach music to children and children with disabilities. What fulfillment do you receive from teaching?

Tsounis: “The fulfillment is in helping the students develop skills and hopefully express themselves creatively. I encourage the students to try things and experiment, to go beyond becoming a musician and being a magician. You never know the full potential or what they may create. I always tell them that the song that they love and want to learn was created by somebody who also picked up an instrument for the first time once upon a time. I also provide music therapy for special needs kids.”

CVW: You are currently a resident of Hemet, California. What’s it like for you in that environment?

Tsounis: “I really enjoy living in Hemet. I think it’s a great mix of the Twilight Zone and a John Waters movie. There’s a lot of creativity there and I get to witness that where I work at the Harvard Street Music Exchange.”

CVW: Tell us about your upbringing and when did music become ingrained?

Tsounis: “I’m from Greece originally and when I was two years old we moved to Johannesburg, South Africa where I lived until I was out of high school and then moved to Boston to attend the Berklee College of Music, then to Long Beach, California, back to Boston and then to Hollywood. Music was always around the house. Initially, Greek music and African sounds on the radio, in the street and mix that with the rock bands I enjoyed as a teenager. I started playing guitar then piano around the age of 14 and it’s an obsession to this day. I just wanted to make up sounds just like the people on those album covers I would stare at. I never really learned many covers back then as I thought that everybody that starts playing Instruments had to come up with their own things so that’s what I always did.”

Austin ‘Tooth’ Malik (drums): “I’m looking forward to the show. I’ve been wanting to play at The Hood for a while. I’m just a guy from Hemet playing music for anyone I can. Being in multiple bands, I like to stay busy. I’ve been a drummer for nine years, a bassist for five but a musician all my life. I met Billy at the music store we both teach at and started jamming with him a bit and his group Vasoline Tuner. Billy is a very talented individual with his cosmic guitar playing and his out-of-this-world writing, his music can vouch for that. I always enjoy playing with him and am excited to jam some more tunes with him at The Hood!”

Noah Estrella (bass): “I’m a multi-instrumentalist from Atlanta, Georgia. I used to be in a couple of weird psych bands, but Billy definitely makes the most engaging music out of all those bands. He’s a cool dude and I’m looking forward to working with him in the future.”