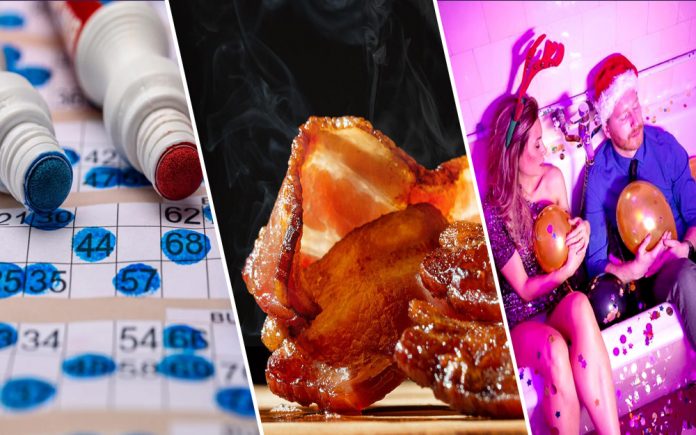 It seems hard to believe but December is upon us.  While the primary focus of the month is on Christmas and Hanukkah, the other twenty-nine have a litany of observances.

Did you know that December is Bingo’s birthday month?  Created in 1929 by Edwin Lowe, Bingo was based on a carnival game called Beano.  Beano finds its roots in Italy during the mid-1500s as Lo Giuoco Lotto Italia – one of the original lottery games.  According to Bingo.org, Lo Giuoco Lotto Italia was played in a manner like the game played today.  As the original cards that Lowe created had too few number mixes, he brought in math professor Carl Leffler to figure out the 6,000 possible bingo card mixes that would make it less likely that any two cards would be the same in a game of Bingo.

December 1st is National Eat a Red Apple Day.  Why green apples are excluded is a mystery.   Apple proponents at the University of Massachusetts Lowell say that apples help increase brain activity.  Apples help in combating Alzheimer’s while reducing the risk of Parkinson’s Disease, Type 2 diabetes and ten types of cancer.  I guess that an Apple a day can indeed keep the doctor away.

December 2nd is National Special Education Day.  This observation was signed into law by President Gerald Ford in 1975 and was accompanied by the Individuals with Disabilities Act which ensured public education for all children.

December 5th is Bathtub Party Day.  I’m not sure if this is meant to be a solo, couple or group celebration.  Thomas and Ruth Roy created and trademarked the celebration as they felt people take too many showers.  Tom is available for parties in the Pennsylvania area where he will craft a party to go with any of his more unique party themes.

So long as you are not a vegan, December 30th is the food day to circle on your calendar if you can celebrate one as it is Bacon Day.  Not to be confused with International Bacon Day on September 3rd, the 30th is when Americans get to celebrate this sumptuous piece of swine.  During the Middle Ages, people first began speaking of Bakko in Germany and Bako in France.  As this type of meat was easy to preserve, it first entered human diets around 1500 BC.  Today people eat bacon in brownies, tacos, cookies, mints, and lollipops.  No wonder that the 30th is also National Bicarbonate of Soda Day.

December 31st may be New Year’s Eve, but it is also Universal Hour of Peace.  The hour starts at 11:30pm and ends thirty minutes into the New Year.  Dr. Barbara Condron of the School of Metaphysics in the Midwest conceived of the hour.  With all the conflicts in the world, it makes sense that more people would want to approach the New Year in a more subdued manner.

Haddon Libby is the Founder and Chief Investment Officer of Winslow Drake Investment Management.  For more information on our investment management services for individuals and businesses, please visit www.WinslowDrake.com.