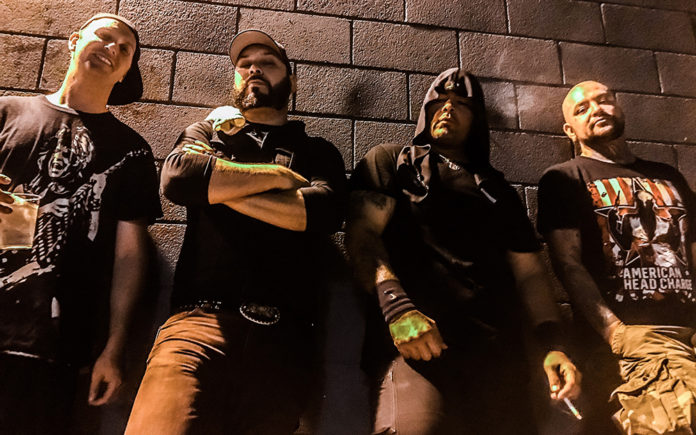 Friday, November 23rd is Record Store Day’s annual Black Friday, an excuse to celebrate the specialness of music in our lives by the releasing of unique albums by some of our most revered artists. As it so happens, Black Friday will take on a new meaning this year as desert metal fans will turn a profit as Sugarbritches Productions presents “BLACK FRIDAY” featuring four award-winning heavy music bands under one roof at The Hood Bar and Pizza in Palm Desert, California. You will witness live performances from IN THE NAME OF THE DEAD, MEGA SUN, PERISHMENT and closing the show is THROW THE GOAT! The show marks PERISHMENT’s first and only show of 2018 and they will be celebrating the release of their new album SATURNINE. At this show only, 50 CDs of the album will be available for FREE and will feature a ‘bonus’ instrumental opening track. This is a FREE SHOW and music starts promptly at 9 p.m.

SATURNINE is the 4th release in the PERISHMENT discography and second full-length album. As its title suggests, the LP is anything but slow and gloomy. Produced, engineered and mixed by PERISHMENT guitarist, Bobby Taffolla, the album is a huge leap from their prior releases and shows their ascension to a plane where they rival the greats of any genre of metal. Coachella Valley Weekly was provided an advanced copy of the album and it is THE Frankenstein of metal albums. Ruben Gutierrez (vocals), Bobby Taffolla, (guitars/keyboards/vocals), Aaron Ramson (bass/vocals) and Tommy Winters (drums) have done it. They have created a sound that is timeless. In ten years, we’ll press play on SATURNINE and it will equal the same feeling we garner when we play Metallica’s ‘…And Justice For All’ and Pantera’s ‘Far Beyond Driven’. Below is our conversation and full album review.

CVW: What has the break in action been like for PERISHMENT?

Ramson: “Bobby and I have been writing music all this time but it’s always been hard to get the four of us in a room together. We’ve all striven, as individuals, to live balanced lives. We all maintain healthy family and home lives and make sure our careers are never compromised. It’s frustrating to be out of the scene for extended periods of time, but at the end of the day, WE define the music. The music does not define us.”

Taffolla: “Yeah, certainly extended time away for a band is never a great thing. Stay away too long and sometimes you have to start back from scratch, which we have done a few times. I agree with Aaron in the sense that we have always been a band that when a member has something going on we don’t just can ‘em and move on, we try and work with the them and take the time that is needed.”

CVW: In listening to the album it blew me away! The first song, ‘Hell Follows,’ is that all-around song every metal band strives to achieve as an opener. It’s one of the best I’ve heard and is a great welcome song for any new PERISHMENT fan.

Taffolla: “When I wrote the music to ‘Hell Follows,’ I was experimenting with a new lower tuning and BAM! the main riff was born. The rest came really quickly and at first I thought the guys would think it was maybe a bit too straight forward. But when everyone added their pieces of the pie, it became a song that has been a favorite to perform live among all of us.”

Gutierrez: “‘Hell Follows’ is a song about dominance fueled by uncertainty, hatred and rational action. Taking matters into your own hands bringing a Hell unlike any of the imposing has ever seen before.”

CVW: The song ‘Kingdom Of Nothing’ and the rest of the album doesn’t let up. Ruben completely destroys and overwhelms with his ever-modernized death growl abilities. And Aaron has refined a new clarity on the clean vocals that provides the consummate counterpoint to Ruben. 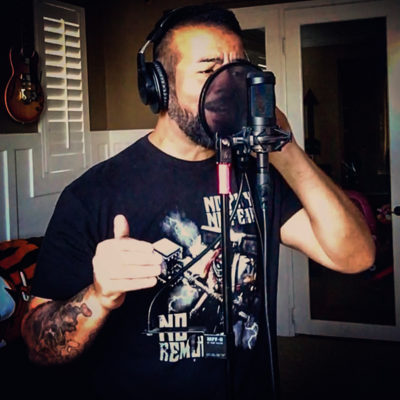 Ramson: “I do all of the clean vocals, I actually use my old growl on ‘Death of 1000 Suns,’ but aside from one verse, every growl you hear is from the lungs of Ruben!”

CVW: SATURNINE sounds so up-to-date and unconventional. It’s likely my pick for ‘Album of the Year’ in any realm.

Ramson: “To be honest, we already had this entire album recorded in 2015. Care to elaborate on how we’ve actually recorded this album 3 times now, Bobby?”

Taffolla: “A long time ago, in a studio far away…”

Ramson: “We recorded the entire album once as a rough demo, something we always do. We listen back and decide what kind of changes we want to make. Then we recorded it again in its entirety and still weren’t happy with the way the mix came out. So Bobby went and studied and became a full blown studio engineer and record producer so we could do it with the tones and vibe we heard in our heads. And he did it right!” 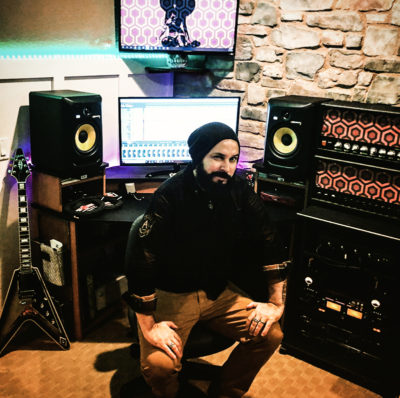 Taffolla: “Yes, this album has been recorded basically three times. First as a full length, then re-recorded as a potential EP and then what we have today. On our last record we really didn’t take the proper time to develop pre-production tracks as we should have, we just wanted it out. This time we did almost too much pre-production on these songs, in the studio and on the stage. But I think it was a much better approach. I did a massive studio upgrade and kinda had to learn certain things and familiarize myself as we went. But overall I think we are all very satisfied with the end product.”

PERISHMENT’S first three releases, Cult Of Disaster LP (2008), Peripheral Veil EP (2011), and Amidst The Black EP (2014), are being remixed and remastered and are slated to be available on all major streaming platforms in early 2019.

If you could include all that is right with metal, it’s manifested in the opener. The peaceful sonic guitar intro is misleading. Its string feel leads to drums, bass and guitar almost funk intro. Gutierrez’ vocals are crisp and as clear as ever. The main riff is heady. The synchronous descending combo of drums, guitar and bass essentially cascades to Hell. The legion of tempos shows PERISHMENT’S ability and homage to the many sub-genres of metal.

With Ramson on vocals this is a great 2nd song. PERISHMENT provides no pause. That’s what you want from a 2nd song on an album. No doubt they had to pull straws to determine the order of songs on the album.

The song destroys. This song belongs on 93.7 KCLB and any other rock station willing to break new ground. You hear me TK?

Gutierrez vocals shine here. He has perfected his vocal technique that separates him from other vocalists of similar styles.

Death Of A Thousand Suns

With Ramson on vocals and double-bass work from Winters driving the song, this is another potential rock radio favorite. It can be easily forgotten, but Ramson’s basslines are intricate and we can only attend a show to see how he balances his dual-duties.

Ramson and Gutierrez crossover vocals are sympathetic to each other. Winters drumming continues to astound. He has developed into a wholesome percussionist accessing the simplest of sounds like the bell of the ride cymbal to amplify the haunting aura.

We Bond To Ghosts

The intro’s chilling and tempo ominous. The continued vacillation of vocals between Ramson and Gutierrez is hyper-effective. Taffolla complements once again and lays the perfect riff.

Driving. Punching. A great track to end the album. Optimistically, I hope the marching tempo leads to the next record.

As an album, SATURNINE is comprehensive. Whether you enjoy Slayer, Dry Kill Logic, Black Sabbath, Judas Priest, Type O Negative, Pantera, Mastodon, Opeth, The Misfits, Deftones, In Flames or Soilwork, you should engulf yourself in this album and I pledge you will not be disappointed.

Produced, mixed and engineered by Bobby Taffolla.  Recorded between May – Oct 2018 at “Saturnine Studios” in Indio, CA.

Saturnine will be streaming on SoundCloud, YouTube, Reverbnation and Bandcamp (via App) November 23rd, 2018.

Saturnine will be available for purchase/download via Bandcamp November 23rd, 2018.

Obliteration (Embers) was released for streaming on Soundcloud on November 16th, 2018